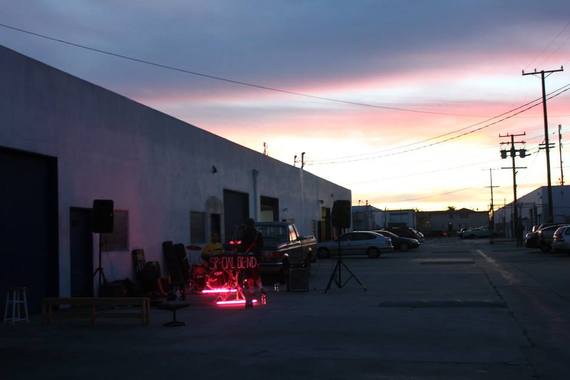 If you miss your exit to LAX while you're heading down the 405 freeway from Los Angeles, you'll find yourself in the city of Hawthorne. Although less than 15 miles from Beverly Hills, it is perhaps lesser known than a lot of neighboring cities (ask any Angeleno where Hawthorne is and a blank look passes across their eyes as they try to remember....) But it is worth breaking out the map and heading to Thinhstudio in Hawthorne on September 6th for a one-night exhibition/cultural happening/artistic hangout. Thinh Nguyen is an artist who has recently begun opening up his studio and curating exhibitions with artists of international recognition in his space. Coming up is a chance to see two exhibitions: VIDEOTAG, which is a one-night exhibition happening only on September 6th curated by Nguyen, and DE COLORES, curated by artist/curator Tania Jazz Alvarez, which runs through September 13.

I met with both curators to talk about these upcoming shows and the grander idea behind Thinhstudio.

Virginia Broersma: In addition to curating, you are a working artist as well. Why did you decide to use your studio as an exhibition space? Do you see curation as part of your artistic practice or is it separate from your studio work?

Thinh Nguyen: I think one informs the other. I see myself as an artist and wherever I go I like to create cultural activities around where I am. I curated for many, many years right after undergraduate school and after grad school I curated again. Then I took one year hiatus from curating because of the pressure curating for galleries...they require an artist who sells...you know, the whole system, which we all understand. The reason why I started to curate out of my studio was because I didn't want to deal with that pressure. I wanted to be able to curate the kinds of artists that I'm interested in and that I believe in, and that I see the potential of in the work. I see that maybe by working with or involving the artists somehow I can create a community through this. 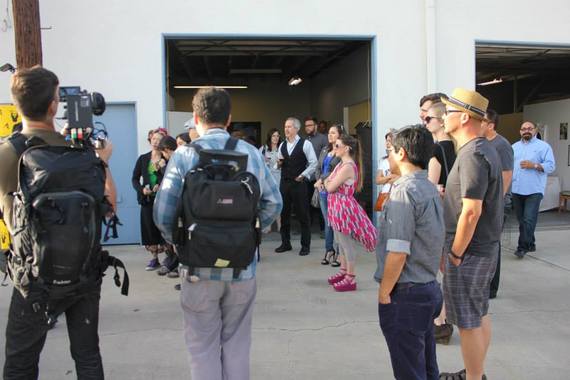 I like to think that I'm cultivating a different kind of audience with my curatorial projects from the usual audience that we always encounter. That's where I think, "How do I make art more accessible?" I think in a studio it's more accessible to the public than it is in a very serene or austere, white box gallery. The vibe is warm and comfortable.

Your upcoming one night exhibition "Videotag" will be taking the work outside of the white cube, so to speak, and will use the facade of your building as a space for "tagging" by projection of videos. Why did you decide to bring the work outside?

I think part of that, again, is making the work more accessible. I'm doing some video projects myself, and I was thinking about the idea of presentation. How do I play with the idea of presentation that's not so stifled? So as I was thinking about video - usually it's represented in a screen - I was thinking about our culture right now in terms of our technology. Everywhere, whatever we interact with, through the Internet, is through a screen; an iPhone, our television screens...our computer screens. We are always bombarded with the idea of the screen. I feel like that screen somehow its impenetrable and it's not accessible, for the fact that it's also put IN an environment - like that white box that we mentioned. So how do I make the moving image or video art more accessible to the public? And I thought: Oh! Projection. You can go as big or small as you want, but most importantly, any surface can become a surface for projection, rather than the screen. Any surface can become a screen.

So the idea of public art and the idea of tagging comes in, because that's what street art is. For me, video art has that same potential, but once the projector turns off, it's gone. And it doesn't damage, and isn't permanent. So I like the idea of accessibility, but also flexibility and fluidity of it as well. 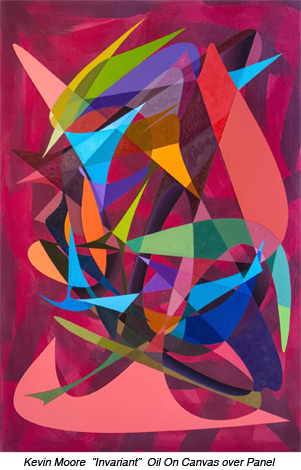 In conjunction with VIDEOTAG, the interior studio space will house the exhibition DE COLORES, curated by Tanya Jazz Alvarez, whom I spoke with about the show.

The exhibition you've curated titled De Colores is simply (or perhaps not so simply) about color. What excited you about the idea of a show based on color?

TJA: I chose color because color IS so broad. It's almost too generic, so I thought it would be interesting to get people from all these varying backgrounds and different genders, different orientations, different socioeconomic statuses - yet who are all accomplished artists - and to see what happens when you pick from each of these different sides.

You've said in the statement for the show that it "starts and ends with color... today we unapologetically celebrate color, in all its glory!" as if it's something you have to apologize for.

It kind of IS in the art world. It's seen as gaudy or "too much", or amateur. It's almost the safer route to use white, or a lot of white, with just hints of subtle color...

...yeah, and then it's beautiful and it's successful...there's nothing wrong with it, but I feel like color is often hidden.

Did you have any hesitation about such a broad concept?

No hesitation on my part. Other people said "what are you doing??" but I've always been a little off kilter and rebellious, and I'm not ashamed of it. I think I picked out some awesome artists; I'm proud of everything they do and I'm proud of what I do. What is great is they don't have the same viewpoints as me necessarily. A lot of them ARE a lot more sophisticated, and there's nothing wrong with that.

Are there other ways that the artists are connected in their work - are there other threads or subthemes that you've noticed? Are there any surprise connections you found that you didn't expect?

Well, color (like I said) is so broad. I have one artist who's gay, and when he thinks of color, he thinks of gay pride. Which is different from when I think of color (I think of socioeconomics, but not everyone thinks that). I have a couple of artists thinking of color in terms of patterning and religious context. I have another artist who's inspired by street art and the color that the language of the street plays. It's all different and I love that. 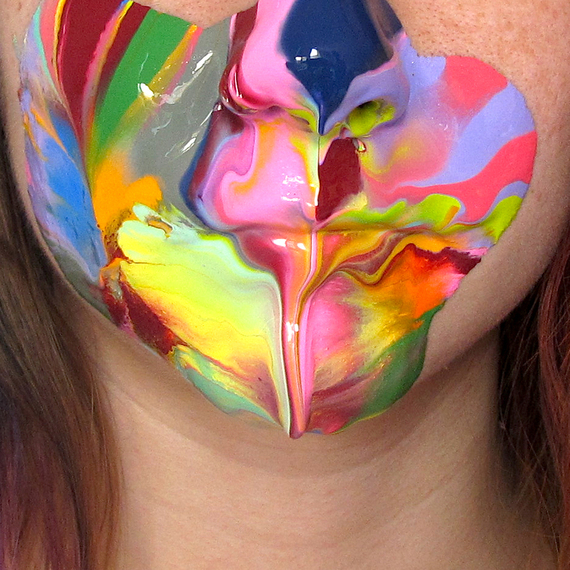 Wrapping up with the curators, I asked Thinh Nguyen what he thinks is special about his space and why people should visit?

TN: (laughs) That's a really good question. I see that it's really weird because there's neighborhood everywhere - you see apartments everywhere - and then all of a sudden there's this non-descript industrial complex with two rows of garages. There's something charming and unique about it.

I think that's what is great about it - it feels like a wild west. There aren't really a lot of cultural activities here in Hawthorne - it's sort of a dry spot. I hope somehow by making the event more public and more relevant to the Los Angeles community at large, they will see that there is culture here. As an artist, I am always cultivating culture. As a curator, that's what my goal is - to activate communities, and to hopefully bring interesting art to the community as well as to the art world audience in an environment that is a little more accessible - an environment where you want to hang out and chill. 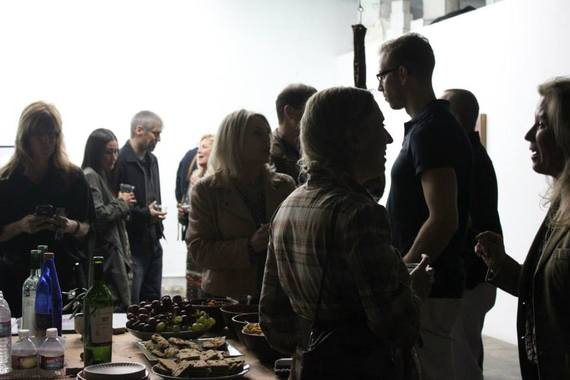