The #thinspiration and #thinspo terms have been banned since April of 2012 when Instagram, Tumblr and Twitter came under fire for the proliferation of eating disorder promotion, the sites made moves to block such content. Yet, despite such regulations, the pro-ana movement (ironically characterized by literal weakness) has seemingly never been stronger. Terms like #th1nspo not only still generate images, but bolster the community. Even simple derivations like #thingspogram still yield hearty search results. Research has shown that this short of content encourages harmful behavior, greatly increasing the risk of anorexia and bulimia in those already at risk.

Pro-ana and thinspo communities have existed since Al Gore invented the internet. For those unaware, they are essentially platforms that not only condone but promote eating disorders. Photos of protruding rib cages idolize extreme skinniness in all its blatantly unhealthy glory, and Instagram's aesthetically-pleasing platform fosters a world where images of "thinspiration"can be enhanced with the Amaro filter.

As the Pedestrian put it, Instagram further "lends itself to the success of the subculture because it affords sufferers quick, effortless feedback." Instagram, and social media in general, is a realm ruled by "likes" which add up to a very concrete estimation of your total "value." So, when those struggling with eating disorders upload photos of their exposed hip bones onto Instagram, the "likes" they receive from the pro-ana community serve as positive reinforcement of what is decidedly not positive behavior. 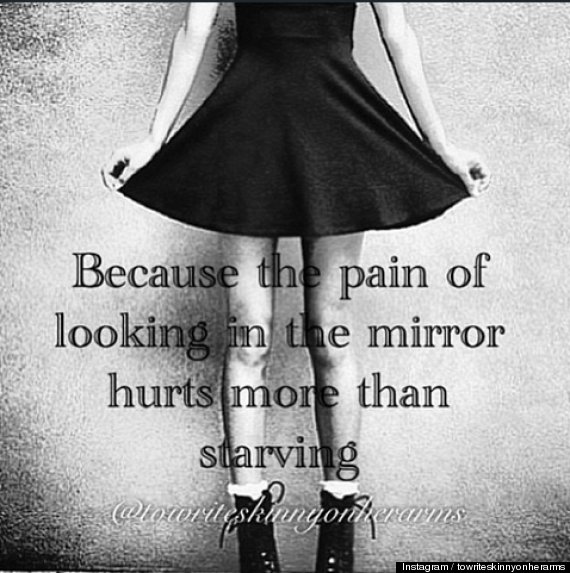 Instagram's April guidelines, released with the ban of #thinspo and #thinspiration read:

Don't promote or glorify self-harm. While Instagram is a place where people can share their lives with others through photographs, any account found encouraging or urging users to embrace anorexia, bulimia, or other eating disorders; or to cut, harm themselves, or commit suicide will result in a disabled account without warning. We believe that communication regarding these behaviors in order to create awareness, come together for support and to facilitate recovery is important, but that Instagram is not the place for active promotion or glorification of self-harm.

Photos of such content were banned and replaced with a warning and link to nationaleatingdisorders.org.

Yet, the variations like #th1nspo quickly popped up. Although Instagram (like Tumblr and Pinterest, who enforced bans with similar partial-effectiveness) is privately owned, it may not be realistic for the photo-sharing site to block searches for every imaginable version of #thh1nsp0 or #pr0-anna search terms. As the Washington Post put it, "social networks have to walk a fine line between curtailing potentially harmful images and censoring their users."

Except, I guess that line wasn't so very fine when Instagram blocked every imaginable use of the f-word. As you will recall, the banned terms include over 65 terms that include the f-word. Sixty-five. Yet, there are only five pro-ana terms blocked? Maybe banning things like #th1nspo and #proanna would be too extreme, and to be fair, Instagram did not block the search for #fck, but what about obvious variations like #proanatips or the simple #thin? Both hashtags still produce frightening results.

A quick Google search will show that thinspiration is still very much alive. It continues to exist on not just Instagram, but Tumblr and Pinterest, and on privately-run blogs. Would incorporating over 65 #thinspo-related blocks make much of a difference? Perhaps the lack of banned terms reflects the inefficiency of attempts to halt the movement, but is there a more effective way to stop it?

As the National Eating Disorder website specifies: "While eating disorders may begin with preoccupations with food and weight, they are most often about much more than food." These pressures are only exacerbated by social media. When valuable "likes" are co-opted by a community that aspires to an unhealthy ideal, the implications become dangerous.

The thinspiration movement won't be done away with by blocking the #thinspo hashtag, and the resilience of pro-ana websites proves that. So, if Insta-bans won't work, what can we do? I suggest that we stop giving a crap about "likes" as a first step. The persistence of communities that encourage and support eating disorders is the product of a broader cultural issue. We need to free ourselves from the constricting aspects of social media's inherent merit system, and acknowledging the meaninglessness of clicking a heart, star, or upturned thumb is the first step in that process.