You wouldn't think a bunch of grungy hippies would introduce fashion trends at Coachella, but the California festival features snapshots popularizing bright patterns and flower crowns.

Being a festivalgoer myself, I thought I was up on all the typical musical festival trends. They dress like people who would spend a few hundred dollars on music and use what little funds they had left on clothing. A lot of festivalgoers have little if any clothes or wear costumes and makeup. It can be fun, but it can get ugly quickly.

Celebrities and their obedient disciples sported bindis at this year's Coachella. As a young Indian woman, I've considered wearing a bindi before in public, but I was nervous about what people might say. People might comment on it. They might ask why I decided to wear it all of a sudden. People made bindi jokes growing up, and I was hesitant to wear one in a setting where it could be easily misunderstood.

I wore one once to an LSU football game, which may seem like I was misusing my own bindi. I wore it in the tradition of my grandmother and with pride of my Indian heritage rather than religiously. It represented something an Indian woman wore as a sort of badge of honor, and I was finally coming to terms with my biracialism. People were receptive, asking questions out of curiosity. Wearing my bindi in a public and traditionally Southern setting was much more than wearing a simple piece of jewelry: it furthered my confidence in my Indian American identity. 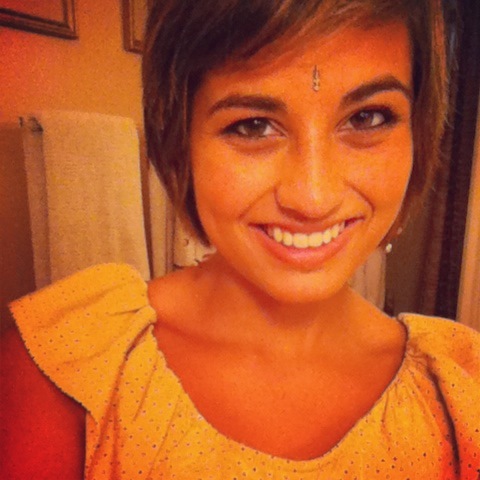 I grew up without an Indian mother or community, so there's a lot I don't know about being an Indian woman. But I did know the bindi held significance because my nani wore a simple red one every day. I understood that married women wore bindis, and I figured that I'd be able to wear one when I wed. The dedication of a daily bindi showed it was integral to her identity, and in my later years, I understood why.

The bindi signifies that the wearer is a Hindu by practice or origin. At its base level, it's decorative jewelry. In Vedic times, it was an adoration of one's intellect. The adoration of intellect was intended to command a pure character from the individual in order to build a strong society. It is also indicates the "third eye" or sixth chakra, ajna, which is the energy point within the body denoting higher consciousness.

The same argument can be made for the cultural appropriation of the cross. I've seen this become a fashion trend in the United States and United Kingdom, and I imagine various Christians might feel differently about its use to dress up clubbing attire.

Other Indians may not care, and others may be grateful someone even notices their culture as I was as a child. Americans aren't the only ones culturally appropriating either. With modern globalization, there's bound to be cultural exchange, and some of it will inevitably be cheapened or misunderstood. Here's the simple rule to participating in another person's culture: If you're going to use something from someone else's culture, people will generally accept you if you do so with respect. It would be in no one's best interest to repurpose something with deep religious or cultural aspects for aesthetic use without acknowledging the object's origins.

This isn't the first time this has happened to something of Indian culture. Yoga studios are more popular than ever, bangles charm the wrists of many American women and nose piercings are ubiquitous. As long as the religious aspects of yoga and the jewelry's origin is given due credit, I can respect that.

The worst case of Indic cultural appropriation is Nazi Germany's use of the swastika. This sign is still stigmatized as a symbol of hatred and intolerance in the West, whereas Indians use the swastika as a symbol of good fortune. I use this to illustrate that if the object's origins are forgotten, they have the potential to be horribly misconstrued, causing a misunderstanding of the root culture.

A relevant factor in that of cultural appropriation is the notion that in an effort to assimilate, minorities in the United States sometimes shed what makes them different. When women are teased or questioned for wearing bindis, it may make them uncomfortable, causing first and second generation Indian American women to avoid wearing the jewelry. And when these same women see non-Hindu celebrities casually wearing something they were conditioned not to wear to fit in with these sorts of girls, it may be a bit jarring, even offensive.

I've made the mistake of misappropriating other cultures in my youth, but after hearing both sides on the appropriation case, I do my best to participate in other cultures with the highest regards. To me, wearing a bindi deserves the same respect as your grandmother's precious pearls or treasured cross, so getting trashed with a third eye doesn't seem very mindful of Indian culture.