Whether the clashes in Jerusalem and the West Bank are the long-awaited "Third Intifada" is the question being asked by virtually every journalist covering the Middle East. (It takes stabbings and house burnings to get the media's attention. Once it stops, attention will swing back to ISIS and the neglected refugees at sea--leaving the Palestinians to suffer their decades-long occupation alone, once again.)

Even among Palestinians, the answer to that question varies. The youngest are more likely to say yes, and to glory in the feeling of empowerment, however temporary. The older the person I interviewed, with some exceptions, the more jaded they became. However, there is one common truth among the people on the "street": The uprising is once again bringing them together (at least in spirit) across borders--from East Jerusalem to Gaza City. 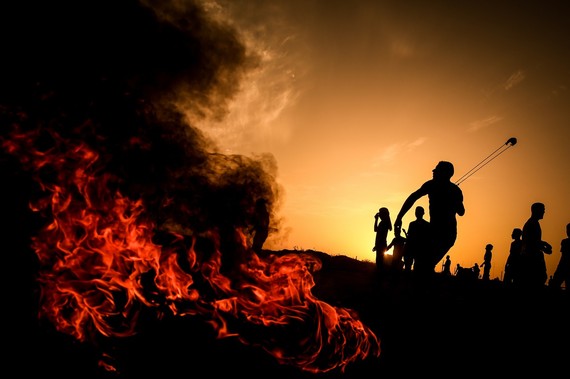 "Everyone is watching TV, seriously, wherever I go--even at the hair salon," says Maha Husseini, who is studying for her master's degree in political science in Gaza. Among her friends, support is strong; there is a sense of unity with the West Bank. Even when the news came in that seven youths had died that day after Israeli forces shot them during a solidarity protest at the border, her friends "strongly supported the demonstration. I heard a couple of people say that even if the protest didn't result in anything, it shows that our spirit has not been broken and that Palestinians here support the Palestinians there. They think it is the Third Intifada, and if not, they want it to begin."

Aboud Asfour, a reporter for Alqanaa TV who lives less than a mile from the watch towers along the Israeli border, agrees. "The intifada has started, and it's here in Gaza now. The politicians are afraid to say that but the young people are ready."

Not everyone in Gaza agrees, however. It has only been a year since Israel launched a major assault on the Strip that left more than 2,000 dead and more than 10,000 injured; tens of thousands more remain displaced. Ahmed Alnaouq, an English literature student whose brother was killed in the 2014 assault, says emotionally, "I support what is happening there, but I think Gaza should step aside (this time). We are not ready for another war." 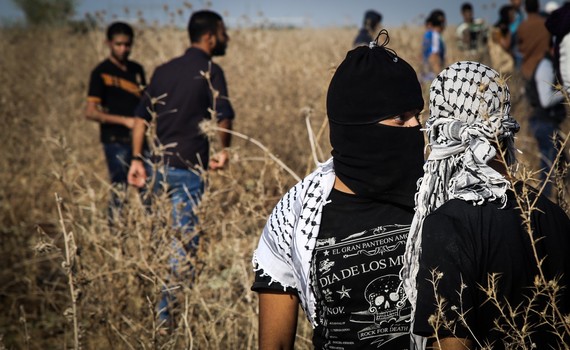 Hossam Al-Madhoun, who heads the nonprofit Maan Development Center in Gaza, which treats many children with PTSD, supports resistance, but not by attempting to respond to violence with violence. "Human beings were created with a passion for freedom and there will always be a struggle to get it. But my worry is we'll see a repeat of 2014. That conflict also started in the West Bank, and then Israel provoked Gaza. It's easy for Israel to wage war and to convince the world it's only defending itself. We will never defeat them with weapons. We can defeat them with peace (non-violence) only."

But is it the "Third Intifada"? Mohammed Alhammami, Gaza project manager for a youth storytelling initiative called We Are Not Numbers, says no. "The Palestinian populace is fed up with the conditions in which we are living, which are much worse than those during the first and second intifadas. But the division between the governments in the Gaza Strip and the West Bank is a big factor in the Palestinian Authority's calculations. The PA certainly doesn't want Hamas to exploit the unrest against it. So, for the PA, an intifada is an existential threat."

This line of thinking, that unity of political factions and leadership is necessary for an uprising to be sustained and effective, is a common one--and for good reason. While Palestinian President Mahmoud Abbas still describes the uprising as "very dangerous" and warns against "an intifada, which we don't want," the leadership of the Hamas government in Gaza is sounding a deliberately contrary tune, at least rhetorically. "Gaza will fulfill its role in the Jerusalem intifada and it is more than ready for confrontation," Hamas chief Ismail Haniyeh told a crowd in the Strip earlier this month. Whether that's really what Hamas wants so soon after the 2014 51-day conflict or is just using the unrest to fuel anti-Fatah sentiments is a matter of debate.

Around the West Bank

Sam Bahour, a business development consultant living in Ramallah and a policy adviser to Al-Shabaka, the Palestinian Policy Network, agrees that some conditions for a true intifada are present, but joins with those in Gaza who warn the necessary unity is missing. Like Al-Madhoun, he emphasizes nonviolence. "An intifada needs unity, leadership, money and a clear commitment to nonviolence from all political parties," he wrote on Facebook. "None of these ingredients are currently present. So let's get real and not allow more precious young lives to be lost to nothing."

Awni Shahrour, a prominent dentist from Ramallah, views nonviolence as an unrealistic ideal. "A third intifada is likely to erupt if Al-Aqsa Mosque is directly usurped or attacked; this is the only trigger I believe would bring this about, whether or not there is any official decision," he says. "In that case, while Intifada 1 was peaceful, and Intifada 2 was more aggressive and lethal, Intifada 3 will be worse, including Israel's response. But what's even more important is that this time we have smart phones connected to the Internet. People now can get accurate news from everywhere immediately, and not just from the state-friendly media."

That means that with each Palestinian killed or injured, with each additional checkpoint set up and curfew imposed, the longevity of the protests is ensured.

"They rebel, and attempt to mobilize and sustain their rebellion as long as they can, because they have no other horizon of hope outside their own action," writes Ramzy Baroud, originally of Gaza and author of My Father Was a Freedom Fighter. "This is a Palestinian Intifada, even if it ends today."