Third Way's tag line on its web site is "Fresh Thinking," but it simply a mouthpiece for Wall Street's curdled ideas.

Third Way's rationale for austerity is a marvel of duplicity or ineptitude so great that duplicity would do less damage to their reputation. Third Way warned: "[F]ailure [of the super committee would have] high costs. A debt crisis is buffeting Europe and represents our future if we do not begin to act now."

So many errors and ironies packed into two sentences. Wall Street's love for debt is epic. Wall Street enriches its executives through debt. It crafted, sold, and purchased the bulk of corporate and governmental debt. Wall Street has decided that debt is the problem, but naturally it is everyone else's problem. Debt is also the neoliberal solution to financial crises. Instead of writing off debt, entities like the IMF prescribe more debt -- borrowed from them. Wall Street's hypocrisy about debt is not the focus of this column.

The financial crisis, "control fraud," the Great Recession, austerity, and the euro combined to cause the broad debt crises following the Great Recession. Severe recessions cause a government's tax revenues to fall sharply and its expenditures for programs like unemployment compensation and food stamps to rise. That causes a dramatic rise in the budget deficit. The financial crisis and epidemics of accounting control fraud cause enormous losses in the financial sector that are often bailed out by governments, particularly if the banks are so large that they are systemically dangerous institutions (SDIs). Austerity can cause already deeply inadequate demand to fall further, increasing unemployment, causing a return to recession, and even increasing the budget deficit. Nations that adopt the euro must give up their sovereign currencies. This exposes them to the bond vigilantes and the potential death spiral (as the bond vigilantes drive up interest rates on sovereign debt the deficit increases and the bond rating agencies downgrade the sovereign debt, driving up interest rates.... The U.S. has a sovereign currency, so we are not like nations that adopted the euro. It is unclear whether Third Way is aware of this basic fact about how monetary systems function. If they were aware, then their 2011 letter to Congress was disingenuous. If unaware, their analysis is unreliable.

I lean towards the "does not understand monetary systems" view of Third Way's analytical failure. The European example that Third Way cited as supporting its plea that Congress inflict severe austerity on the U.S. should have led Third Way to give the opposite advice. I have explained why austerity is a disastrous lose-lose-lose-lose-lose strategy for responding to the Great Recession. It throws the nation back into recession by further reducing already inadequate demand, increases unemployment, poverty, and psychological and social disorders, increases human misery by cutting social programs when they are most needed, it increases inequality, and it can increase rather than decrease the budget deficit and sovereign debt.
Nobel Laureates in economics were already warning that European austerity was producing these "negative sum" results before Third Way wrote its ode to austerity. Data on unemployment rates indicated, at the time that Third Way wrote its letter, that austerity was having the expected effect of increasing Eurozone unemployment.

The first chart shows that unemployment trends diverged sharply between the EU and the U.S. because the EU inflicted austerity while the U.S. provided (modest) stimulus. Note that the U.S. shows a clear trend of reduced unemployment that has continued for years while EU austerity was followed by a reversal of the EU's initial modest recovery from the Great Recession (powered by the automatic stabilizers) into substantial increases in unemployment.

The next chart on EU youth unemployment is even more instructive. It is generally harder to fire workers in the EU than it is in the U.S. Youth unemployment is a better leading indicator (more precisely, it lags far less as an indicator) than is the overall unemployment rate. EU youths are the canary in the mine when it comes to indicating a sharp change in the economy. The surge in youth unemployment in the EU following austerity informed Third Way in September 2011 that austerity was causing the expected economic, social, and political catastrophe.

Third Way had a good example -- the EU's self-destructive austerity strategy that was already causing the predictable damage at the time Third Way wrote to Congress to push austerity. Errors this basic are the product of dogma and bias. This helps us understand the terrible irony that Wall Street is terrible at finance. Wall Street's expertise is maximizing Wall Street pay, even when they blow up the global economy. 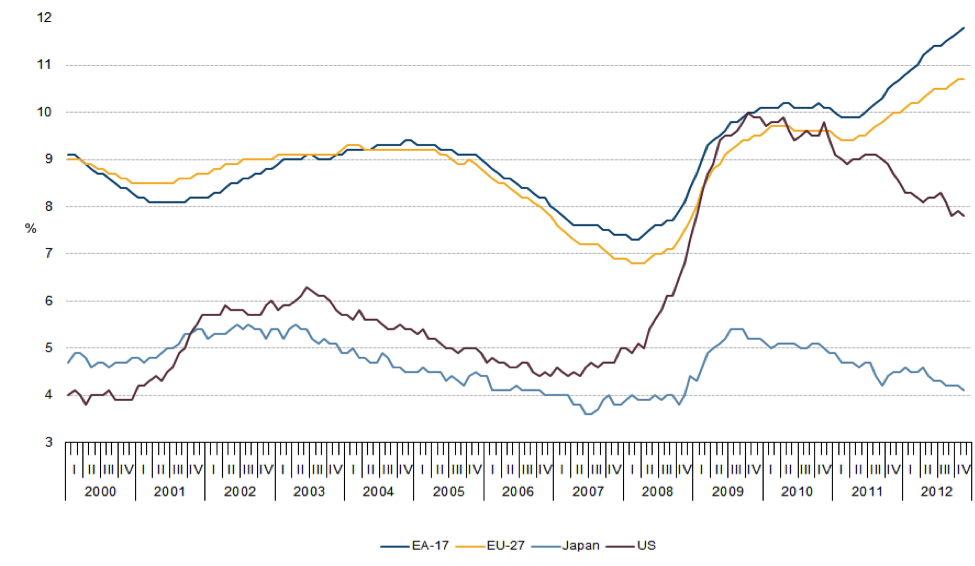 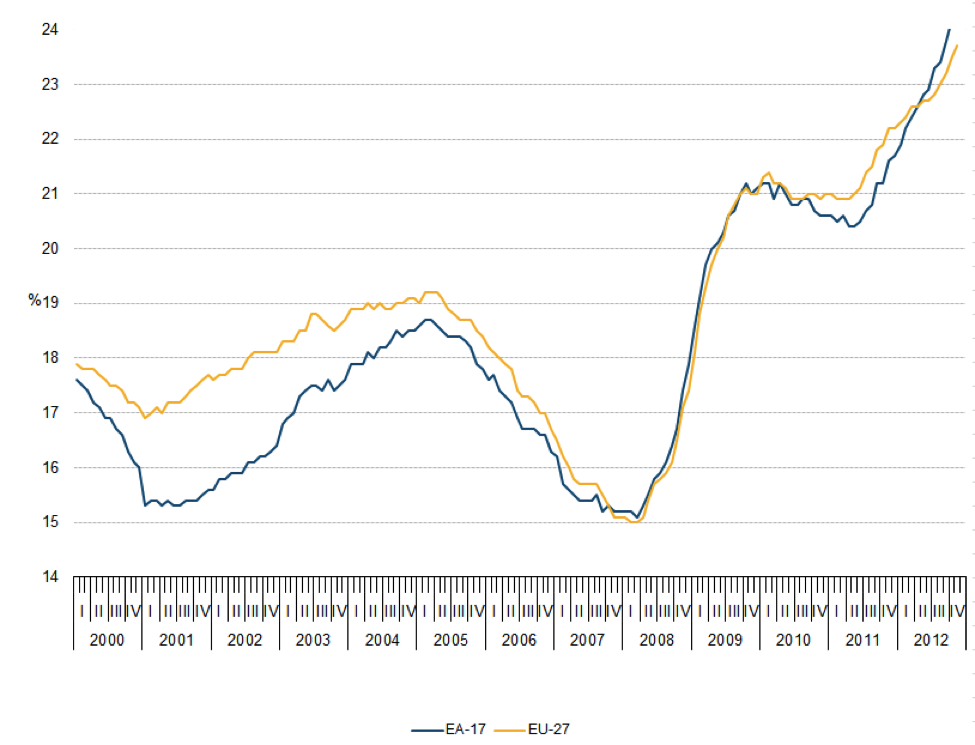 Note: "EA-17" refers to the Eurozone nations, nations that have adopted the euro. "Youth unemployment" refers to those aged 15-24.