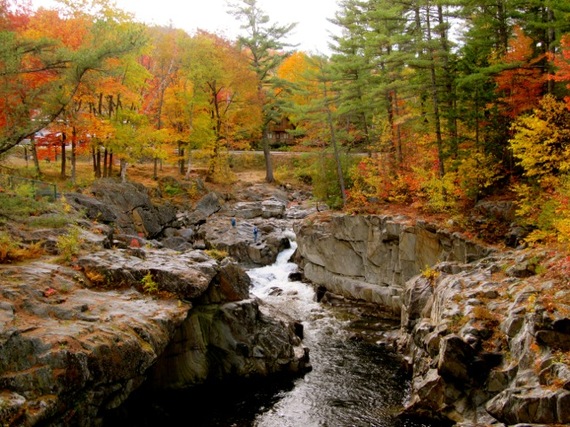 While coastal Maine is all about sailing, whaling, rugged Atlantic shoreline and lobster of course, the rest of this massive state is largely ignored. OK, the Western region of Maine has always been the darling of the "Sporting" set - those who love to hunt and fish (and now snowmobile) - but think "Fall Foliage," and Vermont, New Hampshire and Massachusetts come to mind. People just don't associate the beach towns of Maine with robust autumnal scenery.

The following western lake and woodland towns of Maine -- Greenville, Rangeley, Bethel and Fryeburg - about 200 miles from first to last, provide a fall foliage tour you will never forget. Plan to spend five or six days exploring the area, and a week if you need to unplug. And, as always, consult the Getaway Mavens for more about each town and other Offbeat Escapes in the Northeast USA.

The largest town on Moosehead Lake, find out about the logging industry, cruise the lake and yep, hunt for moose (with camera) in Greenville ME. 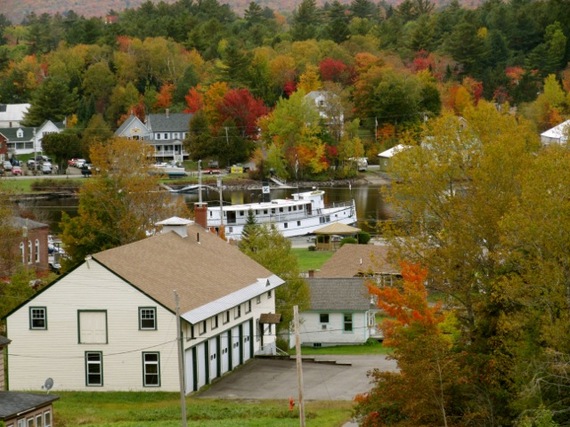 1. Take a 3-Hour Narrated Cruise on the S. S. Katahdin. Named after the mountain seen in the distance (the beginning or end of the Appalachian Trail depending on which direction you hike) this 115 ft. diesel-powered workhorse of a ship once hauled thousands of cords of pulpwood across Moosehead Lake to the head of the Kennebec River. Now, it hauls tourists on a wonderful narrated tour of this forty mile long, 18-mile wide body of water in mid-northern Maine. 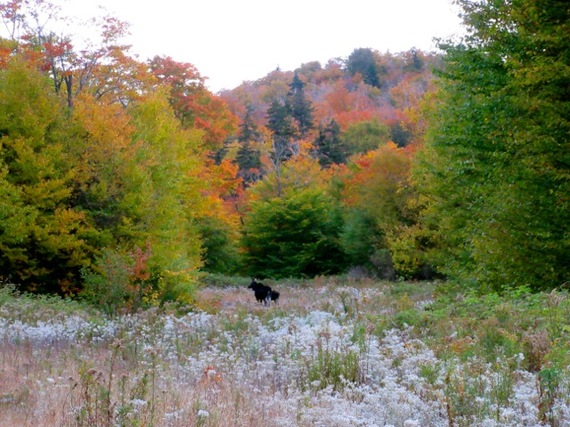 2. Shoot moose (with a camera) on an early morning Moose Safari with Northwoods Outfitters. To see these bashful, ungainly creatures, you've got to head out at dusk (5:30AM), when moose are most likely to be eating in a woodsy cove or slow-moving stream. Though the route is up to the discretion of the guide, this guided Moose Tour will take you on the dirt logging roads that criss-cross the Moosehead Lake region, a terrific way to see the area even if you don't spot one creature, but chances are you will. There are an estimated 60,000 of these "half-ton ghosts" in Maine (a moose population second only to Alaska), so keep your camera ready. 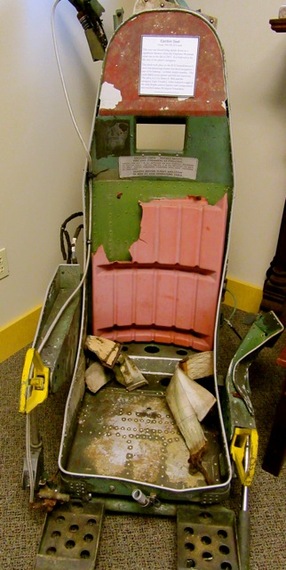 3. Visit the Museums of Moosehead Historical Society. Historical society museums can be cluttered, dreary, disheveled things. Many are run by volunteers who must make due with the resources they have. But not here at the Center For Moosehead History. With a focus on local history - sporting lodges, tourist steamships, and lumber - a docent led tour is a fascinating way to delve into what many would consider true wilderness but was and is in fact a thriving community. The Historical Society is comprised of four buildings - one of which is "in town" in a former church. Perhaps the most affecting artifact is the ejection seat from the 1963 B-52 crash, found "a significant distance" from its crash site, Elephant Mountain, in 2011. 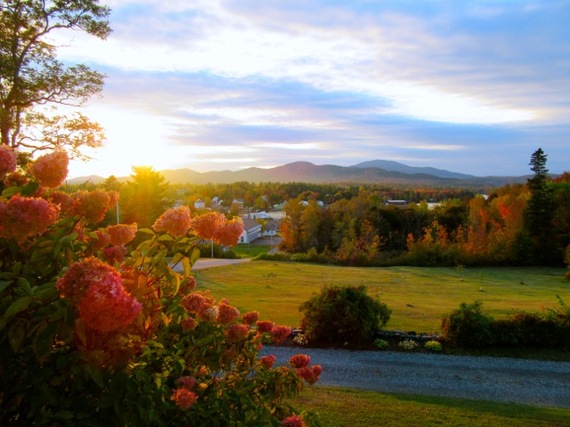 4. Stay on a hill overlooking Moosehead Lake at the Greenville Inn. You'll find astounding woodwork and museum-quality stained glass in this former lumber baron's home - now a 17 room B&B - but it's the warm welcome and hospitality of the owners, Jeff and Terry, that keep guests coming back. Upscale casual, with some rooms overlooking the lake, town and the S.S. Katahdin at dock, Greenville Inn, on the National Historic Register, is a pretty haven just a few steps from town.

Discover a former Science Institute straight out of "Lost" and the way that Big Trout put this stunning Lakes Region on the map. 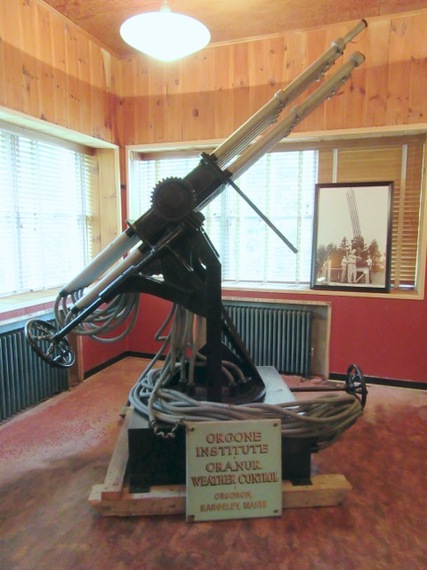 5. Tour ORGONON: Wilhelm Reich Home and Museum, Oquossoc. I'll come flat out and say it - this is one strange attraction, showcasing a very idiosyncratic personality. Wilhelm Reich was either a womanizing Mad Scientist or Misunderstood Genius (my guess is that it was a bit of both), his Home/Research Institute in the Maine woods a mélange of "Lost," "Masters of Sex," and Flash Gordon. Your visit begins with a 30-minute movie about Reich's life and work followed by a tour of his laboratory full of objects that Reich invented, including a pre-cursor to a lie detector machine, and a "Cloud Buster" used to draw energy from the air to reseed clouds elsewhere. Sexual release featured prominently in Reich's work - the function of orgasm was to discharge negative energy in the body. Pent up, it led to disease - a belief that led to his undoing. 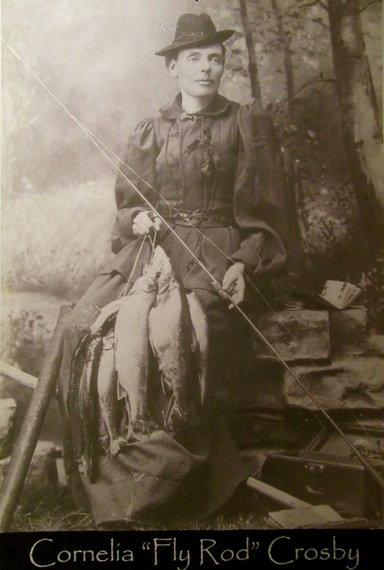 6. Visit Rangeley Outdoor Sporting Heritage Museum, Oquossoc. Opened in 2010 this gem of a museum illustrates the appeal of this blessedly gorgeous region of Maine through its local guides. Rangeley Lake became a hotspot for fishermen when it was found to contain some of the largest brook trout in the world. New York industrialist, George Sheppard Page, who came to Rangeley to fish in 1877, caught eight 11 lb trout, took a picture of them, and changed the fishing world forever. He sent the photo to newspaper editors in New York, they were published, and Rageley Lakes became a summer utopia for fishermen and their families. The Museum showcases famous women anglers and fly-designers as well. 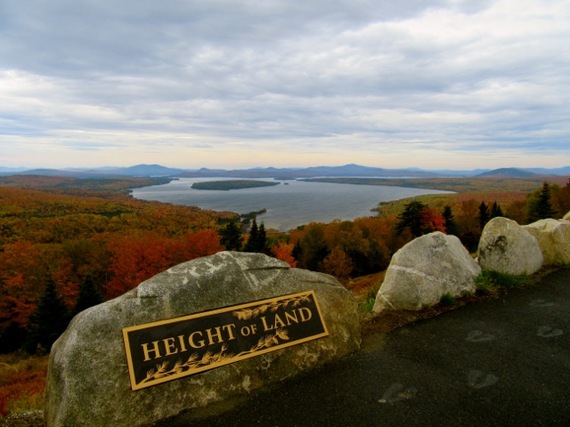 7. DRIVE 30 miles from Oquossoc to Rumford on Route 17. If you've timed your visit to coincide with Fall Foliage, this has got to be one of the most astounding drives ever. The kicker vista is a few miles from Oquossoc - at Height of the Land Overlook. Majestic at any time of year, this panorama, encompassing the Rangeley Lakes and mountains beyond, is particularly glorious. Step outside your car, put your camera/phone down for a minute, breath deeply, and drink in the view.

In the 1890's, Dr. John Gehring opened the Gehring Clinic for Nervous Disorders in Bethel, believing that city living caused all kinds of psychological problems. One of his patients, William Bingham, who arrived here in 1911 from Cleveland, was cured of his Nature Deficit Disorder, and fell in love with the area's natural beauty and tranquility. At his death, Bingham endowed Gould Academy, then a small residential school, with enough money to grow and prosper. The Academy is but one reason to visit Bethel. Sunday River Ski Resort is another. Here are a few more. 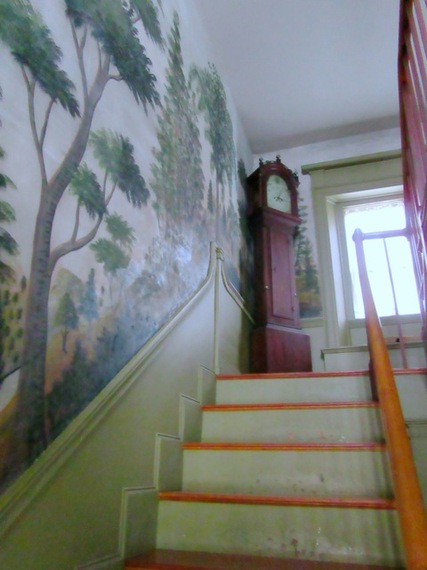 8. Visit Bethel Historical Society to discover how the local doctor double-timed as Post Master, and served as cabinet-maker on the side. His home contains a two-story mural, hand painted in the mid 1800's by famous muralist Jonathan Poore, astoundingly quite intact. 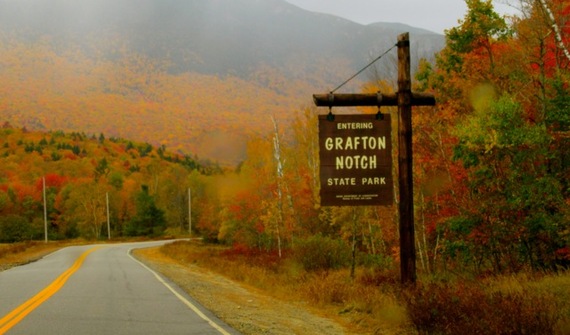 9. Be immersed in White Mountain terrain at Grafton Notch State Park. Route 26N runs through an area more reminiscent of New Hampshire's White Mountains than any part of Maine. Turn off of 2 onto 26N, go about 10 miles to the State Park entrance and stop at several trail heads where you can see waterfalls, gorges, or just take a lovely nature hike. 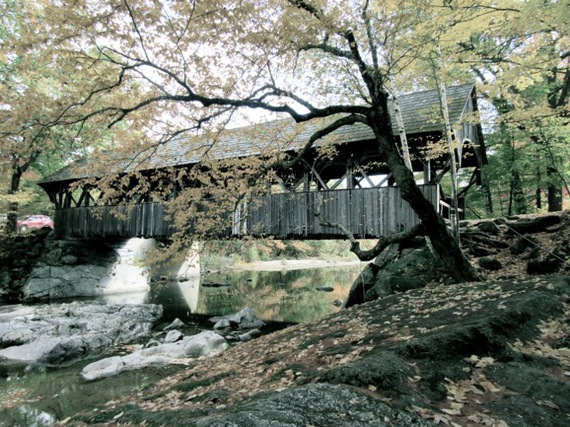 10. The Sunday River Valley along the Androscoggin and Sunday Rivers, is known for its swimming spots, like Frenchman's Hole. Most are on meandering dirt roads with no signage. So, you'll have to stop in to the Bethel Chamber of Commerce (open Mon-Sat 9-5, Sun 9-1) where in-the-know docents can guide you to their favorite swimming holes. 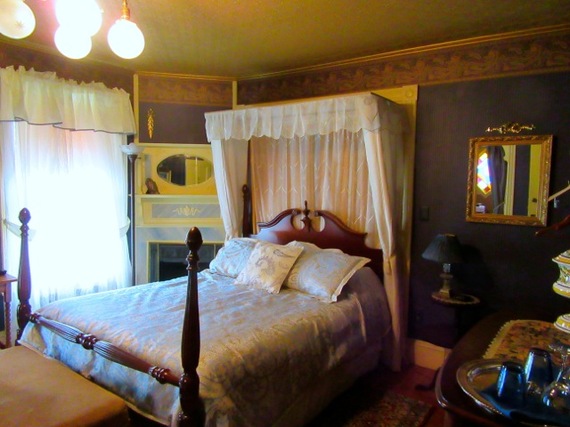 11. Stay at the Holidae House. On Main Street, steps from shops, restaurants and next door to the future Mineral And Gem Museum, Holidea House has been a fixture in Bethel and now there's even more reasons to stay here. New owners (since May 2015), John and Jeanette Poole, have breathed new life into a place that was flagging of late, immediately replacing sheets, bedding and making some cosmetic changes in all seven guestrooms. Thanks to Jeannette's masterly baking skills, afternoon treats and breakfast in the morning are to die for.

There's the famous Fryeburg Fair and Fryeburg Academy, but what else is there in this tiny New Hampshire White Mountain border town? This.... 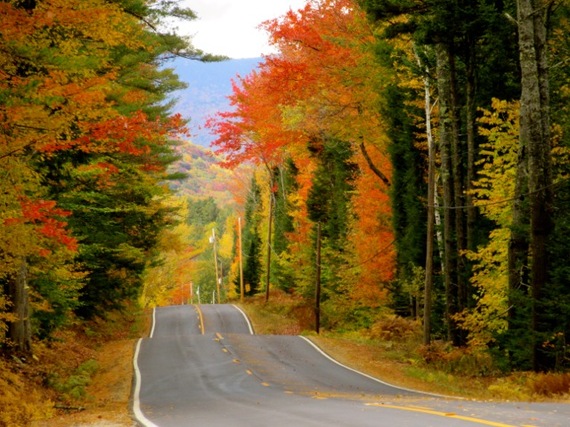 12. Drive Route 113 South from Gilead. This undulating mountain and river road is closed in winter, which gives you some idea of how rustic it is. But this kind of rustic is mind-blowing in September and October when the canopies of trees flame into color. You'll be weaving in and out of New Hampshire through Evans Notch on this National Scenic Byway, with breathtaking views of the White Mountains. 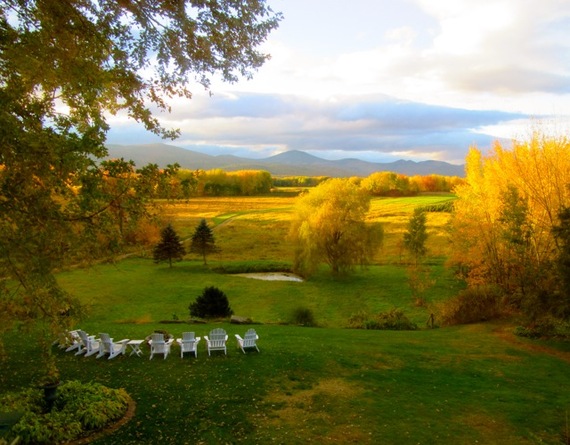 13. Eat and/or stay at the Oxford House Inn. I promised the locals eating here that I wouldn't write about this place; their secret treasure. But, sorry, the travel writer in me just couldn't keep quite. From the outside, the inn building itself is nice, but nothing special. Rambling, old, and sturdy, it's like thousands of other inns across the country. But walk through the door and a) one receptionist at one small table greets you like family, b) redone rooms are pristine and elegantly modern, c) restaurant space is upscale and eye-catching with food that would earn raves in New York City, and d) views overlooking farm fields and mountains beyond will take your breath away. In fact, it is this view - and the exceptional food served here - that keeps guests coming back and places Oxford Inn squarely as a Destination in and of itself.