Wake up, it is early December and filled with only rain. There is still time, for a White Christmas. But Christmas is a million miles away and tomorrow is my 37th birthday.

Feed my children pop-tarts and frozen waffles for breakfast, none of which they eat. Forget where I put their homework, kiss them goodbye, send them to the bus stop in the rain. Lay back down in bed, in yesterdays sweatpants and knotted hair, close my eyes for exactly thirty-six minutes. Wake up, put on my boots and drive to the grocery store. Turn up the music, extra loud. Drown out the silence that is even louder.

Thirty six was a year of in betweens. In between thirty (so young!) and forty (so old!) I got a little fat in the middle, but at least my boobs grew -- a little -- too. In between reckless and wise, in between knowing what's right and doing it. My husband's head at a resting place, in between my legs (but lets just keep that, between you and I).

I gave up beer and switched to red wine. I did shots with 25 year olds, at the bar, at closing time. I was in my pajamas at 8 pm on Saturday nights. Sometimes yes, sometimes no. That is thirty-six.

I started taking medication for high cholesterol. I read On the Road by Jack Kerouac, expecting to be "moved", like my old English Professor with the leather patches on his sport coat said he was "moved". But all I thought about was how pointless it was, how circular the dialogue was, how sad the entire story seemed. I wondered about Dean Moriarty's mother, about how much she must have worried about her son. Poor Dean Moriarty's mother.

I started hating my upper arms this year, for no plausible reason except that I realized that they wave long after I've stopped waving hello. I fell in love with my hair, let it grow long down my back. I learned to knot it up at the top of my head, to make my face look thinner. I had my 14 year old daughter teach me to do cat-eyes, but everytime I try it myself, I end up looking like my six year old did it for me.

Thirty six is all dressed up and no where to go. It is fighting with my mother and my teenage daughter, the same day. Because they are impossible. But maybe, one of them suggests, I am the one who is impossible?

I make dinner for everyone. Three different dinners, because one kid doesn't like meatloaf, because it is so meaty. And another one is only eating Things That Are White, this week. I do the dishes. It's a remarkably, unremarkable day.

Before I go to bed, on the eve of my thirty-seventh birthday, I call my mother and ask her to tell me the exact hour and minute of my birth. Then, I regret the call, almost immediately, for two separate reasons.

First, when she tells me that I were born at 12:27 am, just after midnight, which leaves exactly 3 hours and 11 minutes left of this 36th year.

Second, when she tells the story, again, of the painful experience of my birth. It was long and unexpected, beginning a whole day before I was actually born. There was the frantic call to her own mother, when the contractions came close--- but not close enough to go to the hospital. Then the recounting of the dubious advice given there-within, by my grandmother ("Take a shot of whiskey"), and then the second call to my grandmother ("Take another shot"). The white tennis shoes the doctor was wearing when my mother finally went to the hospital. Then the excruciating, unmedicated delivery. My first, slightly drunken cries. My 9 pound shape, stuffed into a receiving blanket, perfect---save for an extra digit on each hand. Unique. Fat. Remarkable. Mottled. Did she mention, fat?

I hang up the phone. I lie on the floor of my bedroom for awhile and remark over how I survived being born.

I look at the scars on my two hands, where those vestigial fingers once grew. Once I was remarkable, and now I am middling. Middling, up a winding staircase toward middle age. Or maybe I am middling, safe in the sweet spot. No more hard decisions to make, those seem far behind or looming far ahead. No major fears, no sworn enemies. I mostly like the skin I'm in, and I celebrate the skin of the women who have come before me, who take the time to surround me. These are good things. These are remarkable things, aren't they?

I look up the word middling in my old thesaurus: good, decent, modest, all right, tolerable. Aren't I those things? Aren't those things wonderful? I am okay, and that is okay.

But the truth is, I'd hoped to be a little further, a little more than halfway. Way past okay.

I walk to the kitchen. Take a shot of whiskey. In honor of my mother, in honor of this day in December, a long time ago, when I was waiting to be born.

One more shot, burning on the way down. Cheers to another year.

On the eve of 37, it is all possible still. And I am just waiting to be born, again. 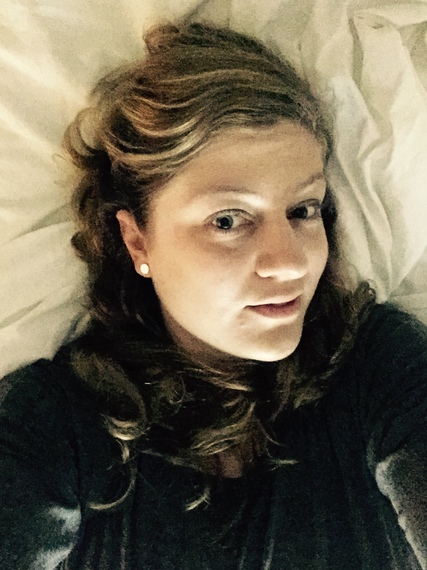