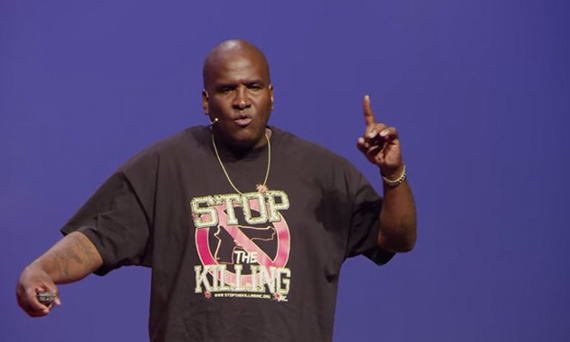 In Baton Rouge, La., Silky Slim, pictured above, has implored the United Nations to pay attention to what he calls the "hypocrisy" of the United States regarding the treatment of some of its own citizens, African-Americans. In fact, several UN officials have readily commented on racial and other violence in the United States as well as the conditions of blacks in the country.

As reported globally and partly captured on video in July, the capital of Louisiana suffered the shooting deaths of three police officers and the death of a man selling CDs at a convenience store parking lot, all within two weeks. Both episodes and other killings last month of black men and police officers jolted the US into a deep examination of how violent race relations had become in the country.

Slim, whose real name is Arthur Reed, lives in Baton Rouge -- the city's South Side, to be exact -- where he runs a nonprofit group, Stop the Killing, recording violence in the area to show in schools, churches and other community settings to educate people on injustices that may not get much scrutiny.

His goal is to stop street violence and other "senseless killings," he said in a phone interview after the Baton Rouge killings, by diverting young men and women away from criminal and self-destructive behaviors through building self-esteem.

Slim, who is 43, knows well a violent life. He was a gang member and drug user who tried to commit suicide and served years in prison before he turned around and found a lifesaving cause: antiviolence. He grew up in Baton Rouge in the "depressed neighborhood between Beauregard Town and the North Gates of LSU," or Louisiana State University.

By age 14, he was locked up for two counts of attempted second-degree murder. Years later, after surviving a near-fatal car accident, he said he heard God speak, "I just brought you out of that, now what are going to do for me?"

He opened Stop the Killing, where he tries to educate the community on nonviolence. His new civic venture is to increase awareness of the July 5 deadly shooting by Baton Rouge police of Alton Sterling, a black man who sold CDs in front of the Triple S convenience store. The night of his death, police reported they had been responding to a call that a man was seen in the vicinity wielding a gun. Sterling was apprehended and pinned to the ground by two white officers and shot instantly. Whether he carried a gun has not been fully established.

The US Justice Department announced soon after the death, recorded on video by Slim and the store owner, that it would investigate the killing. Slim's video set off a street protest, which remained calm, in the city the next day.

More violence in Baton Rouge ensued: on July 17, two days after Sterling's funeral, three local police officers were killed and five others were wounded on a strip mall. Louisiana officials labeled it an "ambush" by Gavin Long, a lone gunman and ex-Marine apparently intent on executing police. He was from Kansas City, Mo., and had brandished an assault rifle that Sunday morning before he fired at police and was shot in the gun battle.

The two incidents preceded by mere days the killing of a black man by police in Minnesota and then five police officers shot in Dallas by a black sniper. Yet the racially charged and retaliatory episodes were also interspersed with peaceful street protests, making neat summaries difficult.

As Teju Cole, a photography critic for The New York Times, wrote about the Baton Rouge incidents: "Rightful protests against murder are not to blame for other murders."

After Sterling's funeral on July 15 in Baton Rouge, Slim surprisingly invoked the UN in an impromptu video interview (the day before the Baton Rouge police officers were killed).

Speaking in the video, which surfaced on Twitter, Slim said that he hoped that the UN would look at Sterling's death and see America's "hypocrisy" for sending "the same young men" to fight for democracy elsewhere but denying them democracy at home.

"America has very persuasive power in the UN," Slim said in a later phone interview, noting that his country addresses inhumane conditions and humanitarian needs elsewhere, but not necessarily, he added, at home.

Slim was most likely unaware that Secretary-General Ban Ki-moon's spokesman had eagerly addressed the issue of the violent, racial deaths that occurred in July in the US, when the spokesman answered a question from a reporter.

The reporter's question said, in part, "two African‑Americans have been, in a very high‑profile way, killed, Philando Castile in Minnesota and Alton Sterling in Louisiana. One was captured on film, the whole incident. And I wanted to know, although these might seem to be disparate incidents . . . what does the Secretary‑General think, if the United States has enough protections for particularly members of minority or other groups . . . being shot by the police?"

Ban's spokesman, Stepháne Dujarric, said to the reporter: "First of all, our condolences go to the families of the victims involved in both shootings. I think anybody who's seen the videos, they are extremely disturbing to say the least, and we would hope that each of these cases are investigated thoroughly in order to find out what happened and also to establish if there is, in fact, any pattern."

Dujarric said that Ban also condemned the sniper deaths of the five police officers in Dallas, adding that the violence in the US "has put the focus on the need to address discrimination, including racial disparities in law enforcement, in a comprehensive approach."

Several ambassadors who represent their countries on the UN Security Council -- namely China, Malaysia and Venezuela, each experiencing varying degrees of tension with the US -- said in brief questioning that the topic of racial discrimination or racial violence in America has not come up in council meetings. The countries vehemently agreed that the topic should come up.

The UN's leading human-rights advocate weighed in two months ago about discriminatory gun attacks in the US.

In June, after the killing of 49 people by a gunman in a gay nightclub in Florida, the UN High Commissioner for Human Rights, Zeid Ra'ad Al Hussein, urged US leaders to live up to its obligations to protect its citizens from the "horrifyingly commonplace but preventable violent attacks that are the direct result of insufficient gun control."

In addition, a UN human-rights expert, Ricardo A. Sunga III, who heads the UN Working Group of Experts on People of African Descent, said after the deaths of Philando Castile in Minnesota, Sterling and the Dallas police officers: "The Working Group is outraged and strongly condemns the new police killings of two African-American men. These killings which were captured on video cannot be ignored. We call for prompt independent investigations to ensure the perpetrators are prosecuted and punished.

"We also condemn the attacks on police officers in Dallas and call for the perpetrators to be held accountable. Excessive use of force by the police against African Americans in the United States is a regular occurrence. African Americans are reportedly shot at more than twice the rate of white people."

In January 2016, the working group released its findings from a mission to the US to assess the situation of African-Americans and people of African descent regarding racism, racial discrimination, Afrophobia, xenophobia and related intolerance. The group said in its report, "The United States is still a long way away from dealing with the systemic and institutionalised racial discrimination that plagues it on all levels."

Conditions for blacks in the US, despite major advances, remain unequal compared with whites. The Lancet said in a July editorial that some well-being indicators of blacks have improved in the last decades, like better health care coverage, but "little movement has been made in reducing the number of black children from impoverished backgrounds."

In 2014, compared with 12 percent of white children, 37 percent of black children lived in poverty (defined as an income of $24,008 for a family of four), The Lancet said. "In a related metric, the percentages are similar for the stark divide in children living in food-insecure households (black, 34 percent; white, 15 percent).

"Just as in 1960, issues of race, racism, and inequality are once again at the fore of the national conversation," it noted.

Since the deaths of the Baton Rouge police officers, Slim said on the phone, his group has not been prevented from doing its video recordings by the police, yet: "It's a funny situation to be in. We are trying to stop violence and now we're viewed as anti-police."

If he could come to New York and talk to the UN -- particularly the Security Council's 15 members -- Slim said he would tell it to "make America rethink some of her laws, put racism on the table."