A paintbrush, paint tubes and a massive tent-sized canvas. There are no depressing or complex paintings in dark palettes. The artworks are simple; they depict the sun, the clouds and wide-open skies, injecting every tent with an innocence that echoes that of the Syrian children living in the refugee camps in Lebanon and Turkey.

Syrian artist Diala Brisly started this art project more than a year ago. With it, she has been able to find a new home for the drawings and paintings born in her comic books: the walls of refugee camps.

Armed with her art supplies, Brisly seeks to spread happiness in the camps. The project, originally conceived in Arsal town in Lebanon, has inspired children to express themselves through art. Brisly told HuffPost Arabi that “the children have welcomed the project with open arms because it gave them a taste of the home they left behind and of the parks they used to play in.” 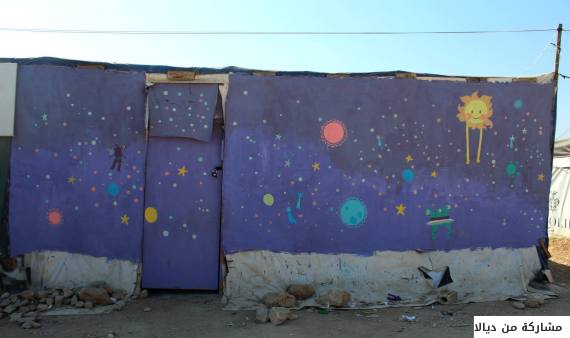 In one of the refugee camps in Lebanon, the artist created a painting that is simple in composition but complex in meaning. Through it, Brisly tried to capture the life of Syrian refugees. "This painting depicts a balloon-like aerostat that flies over a severely disfigured country. Flying here is a symbol for the state of refugees who find themselves at a loss for identification, who live on a land that is not their own, and regardless of how much time they spend in the camps, everything around them is surreal and temporary," Brisly said.

Brisly volunteers at the camps and is not seeking compensation for her art. She launched this project on her personal Facebook page, where she would share her paintings. She believes that “drawing and art can potentially have a great impact, but the problem is that in our culture, art is considered to be a mere luxury, even though it has a significant role to play in supporting major causes.”

To Brisly, the tent is an outstretched canvas with the power to “create new memories for young refugees, and transcend the miserable realities of the camps.”

“The camp is otherwise colorless,” she said. “The children are denied access to education, and are forced to take on strenuous jobs instead to support their families.” Brisly has one key rule: The simpler the drawings, the more accessible they are to the kids. She wants to create paintings that inspire the children, and that are easy enough for them to copy or adapt in their own individual styles.

She even involved the young refugees in one of her art projects. “In Al-Sa'adah camp in Lebanon, children participated in the project through sharing ideas and creating sketches and drawings, and in turn I painted them on the walls and on the tents.” 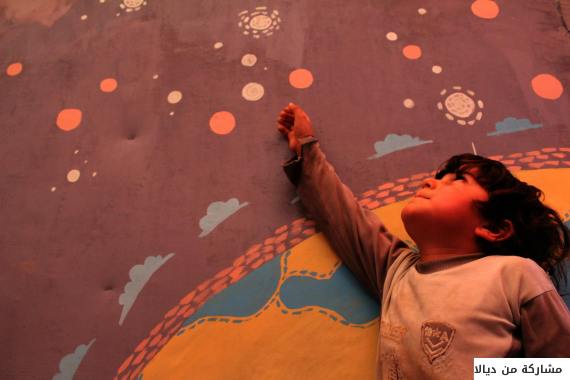 The artist is keen on carrying out her ideas on those tents that have been repurposed as schools for young refugees, in an attempt to attract the kids to the makeshift schools and motivate them to study despite the hardships they face on a daily basis.

Her dreams are not met with support from parents. “In the eyes of adults living in the camps, this artwork is mere decoration. They completely overlook all the other dimensions of this project," she said. “The younger refugees have a completely different reaction to the project. The artwork clearly has a strong impact on them. In short, their eyes glimmer at the mere sight of the paintings.”

Brisly is not the first to bring art to the camps. What sets her work apart, however, are those bright colors, which breathe life and happiness into the camps. This contrasts with an art project in Al-Zaatari camp, which in her view is “aesthetically impressive, yet it focuses on the negative, harrowing aspects of life in the camps.”

“For me, art is a beautiful experience that provides an opportunity to escape the cloud of misery under which refugees spend their days,” she said.

This article originally appeared on HuffPost Arabi and was translated into English.