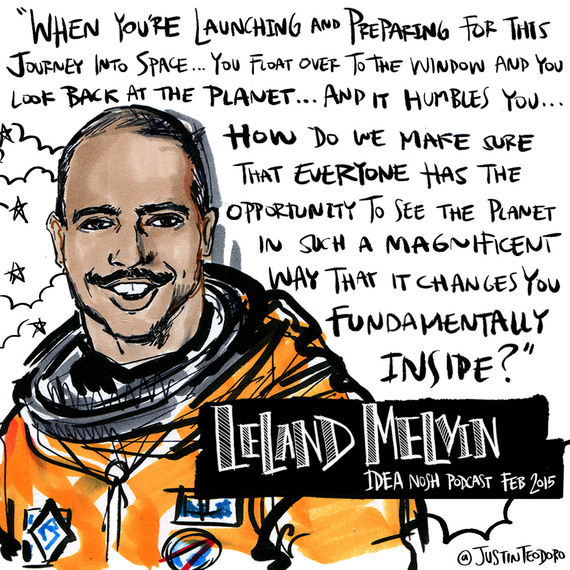 When I first entered through the door of Leland Melvin's home in Lynchburg, Virginia, there was a momentary feeling that I was walking down the long hallway of a chic hotel lobby. A grand piano came into view directly ahead, while a wall of cloud photos as seen from space lined the corridor; in my peripheral view I caught the colorful brush strokes of a Michael Kagan print -- yellow and blue splashes of paint shooting out of a shuttle propelling itself forth off its canvas with unbounded conviction. That's when it occurred to me that this wasn't a chic hotel, but was in fact, Leland's very inviting home.

Leland admitted how spacious it was in Lynchburg -- far more commodious than what we New Yorkers are used to -- but what really drew him back to his hometown was not the space, but his family. His father had fallen ill and Leland wanted to make sure he was there for him.

The day that I moved back here we had this great conversation about why he needs to take a bath -- and then he passed the next day. It rocked me, it floored me, but I remembered some of the things that my dad said to me and he said, 'Hey, take care of your mom,' so I'm here for my mom.

Leland's father, a former school teacher for three decades, is unequivocally his biggest hero. "He showed me that you can do anything," recalls Leland. "It really hit me when we converted a $500 bread truck one summer into our home-away-from-home RV."

It was those types of activities that primed Leland for his eventual move to NASA. Prior to his induction into that role, however, he had a brief stint in the NFL as a wide receiver -- first chosen by the Detroit Lions and then by the Dallas Cowboys; a pulled hamstring, however, prevented him from moving further with his football career. "It was really a series of events that led me [to NASA]," Leland recounts. "A friend shared with me that NASA was looking but I didn't apply. Then a friend entered the corps that year and exposed me to the job and I said, 'I can do that!' That's when I went out to pursue the dream."

Becoming an astronaut is easily the dream of many but sometimes that's all it ever is -- a dream. For Leland, who happens to be the 13th African American astronaut, that all became a reality through patience, hard work, and a knack for problem solving. About 14 years after Melvin joined NASA, he flew two missions on the Space Shuttle Atlantis -- first as a mission specialist in February 2008 and then as a mission specialist 1 the following year.

"I always think about my first flight; we were flying around the world 17,500 mph every 90 minutes and we are eating this meal with people that we [the United States] used to fight against," he recounts in the IDEA NOSH podcast. "We all float over to [the dinner table] and amass around [it] -- people from Russia, Germany, France, African American, Asian American, the first female commander -- and we are listening to Sade on the iPod through the speakers as we're tasting these different meals from around the world."

Leland says that was the moment where he recognized exactly where he was.

Everything before that was your task, getting the job done... but this was a moment where you can have this incredible meal with people that you used to fight against. That was the most transformative moment for me because it also helped me get my orbital perspective.

The orbital perspective was a term that Leland's colleague, Astronaut Ron Garan, first used to describe the shift that happens inside one's brain when you are looking at the Earth from above. It's the realization that, "we are all traveling together on the planet and that if we all looked at the world from that perspective we would see that nothing is impossible."

This shift was something that Leland discusses early on in IDEA NOSH: "When you're launching and preparing for this journey into space and you're sitting there on the launchpad... 3, 2, 1 lift off, you take off your seatbelt and you float over to the window and you look back at the planet... and it humbles you," he says reflectively. "How do we make sure that everyone has the opportunity to see the planet in such a magnificent way that it changes you fundamentally inside?"

It's this perspective that brought both Leland and Garan to the idea of starting Spaceship Earth Grants -- a public benefit venture whose mission is to make space more accessible through human spaceflight and parabolic flights. "We have a vision to democratize space by allowing others to get the orbital shift when you see the planet from the off-planet perspective," says Melvin. "Everyone can't afford the price tag to fly in space, so we wanted to pay for people that can return from a space-like experience and inspire through their story."

Stay tuned for more information on Spaceship Earth Grants here.
To listen to more of Leland's story, head over to IDEA NOSH via iTunes or Stitcher or watch below.