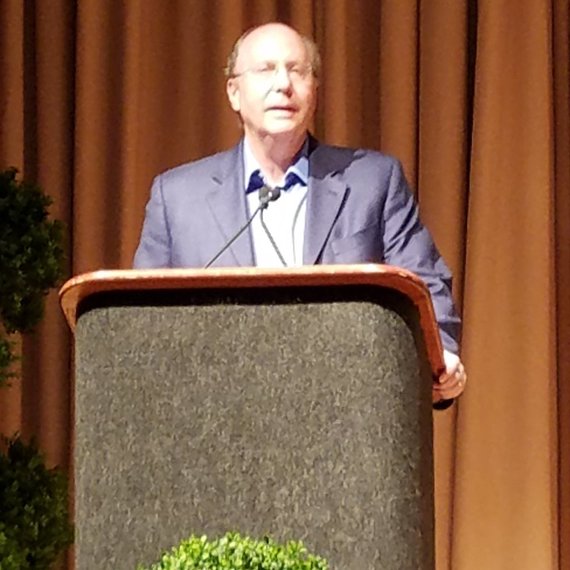 A local billionaire has a revolutionary idea that would overhaul public education in Philadelphia. The co-founder of Susquehanna Investment Group (SIG), Jeff Yass, presented his bold initiative at Philadelphia Magazine's Thinkfest. It would be easy to dismiss his idea as one from the clueless elite, but anyone who has known the renowned trader for a long time, including this reporter, knows that he can see profit or potential at the poker table, race track, and the stock market that others failed to notice. Unlike Donald Trump, he's a billionaire that did not start his empire with a "small" loan of $1 million from his father. He secured the stake to start his company, which is one of the world's most successful trading firms, the modern way-by winning at poker. Unlike many on Wall Street, he did not earn his fortune taking advantage of those less fortunate than him. The only toes he may have stepped on were of his fellow millionaire traders.

The investor, along with his business partners, Joel Greenberg and Arthur Dantchik, has long seen school choice as the civil rights issue of our time. Janine Yass, his wife, founded Boy's Latin, a charter school in West Philadelphia.

The usually reclusive trader surprised the audience at Thinkfest by proposing a bold initiative that would dramatically change the educational landscape in Philadelphia and could turn the region into an educational powerhouse. "We would give every child in the city of Philadelphia a voucher. The good news about Philadelphia is that it is the poorest large city in America so we have nowhere to go but up. I believe if we take this voucher idea we can go from the poorest city in America to the richest city in America. We can go from the Philadelphia 76ers to the Cleveland Cavaliers," said Yass without a trace of hyperbole. "What I would propose is that we give everybody $10, 000. You are free to go to any school that you want-a Catholic school, a charter school, a private school- and you are also free to go to your local district school. If you are satisfied with the government schools, you are welcome to stay there."

With the ease of someone that trades eighths and quarters for a living, Yass quickly rattled off the numbers to make his case. He noted, "$16,200 is the amount of money that the city of Philadelphia spends on its students per year. 69% of the schools are low performing. Basically, maybe 10% of the kids coming out of Philadelphia public schools are ready for college. At $16,000 a kid, about 200,000 kids so we are talking about $3 billion down the drain every year."

Educational voucher proposals are nothing new. Yass added a twist to his proposition that would change the paradigm of education if adopted. "Plus you would get $6000 that you could put in the bank. By putting the $6000 in the bank over 13 years (K-12), you could invest in the stock market, bond market, or whatever; on average you would have $109,000 when you graduated," suggested the investor. "So a kid in Philadelphia would have $109,000 when he graduates in high school. He could take that money and go to college with it so he would have no student loans. He could take that money and buy a business with it. He could start right out in the middle class." SIG analysts based the sum of $109,000 on an internal rate of return of 5% for 13 years.

Yass dared the crowd at Thinkfest to visualize his free market educational utopia. He exhorted, "Imagine a low income family of 4 kids in Philadelphia. Why are they poor? They are poor because they are forced to take that money against their will and spend it on the district schools. No one in their right mind who was low income and had $832,000 for 4 kids would spend it on the district schools and neither would these people. So if we had the plan where you got the $10,000 voucher and $6000 in the bank, when this family of four graduated high school they would have spent $520,000 of that money on a quality education. The education would be good and worth way more than the $520,000 not way less than $832,000. But each of the kids would have approximately $110,000 or $439,000 for the family of four to start their lives. $440,000 is what they would have to start a business, buy a home, do whatever they please, or go to college if they like."

If his plan was successfully implemented, Yass believes that Philadelphia would be at the center of the education revolution. He wasn't above drawing parallels to the revolution that occurred in Philadelphia in 1776. The lifelong advocate of free markets explained, "If we had 200,000 kids roaming Philadelphia with $10,000 in their pocket, ready to spend on any school that they want to, entrepreneurs from all around the country, charter school operators, private school operators, would flock to Philadelphia. They would say I am opening up my shop in Philadelphia because I have a customer base of 200,000 people who have $10,000 to spend. I will bring in more schools. If your kid is a math kid, we'll have math school. If your kid is an artist, we'll have an art school. If your kid is a computer programmer, we will have a computer programming school. If your kid wants to get a job in the trades and wants to learn a real vocational skill, we are going to teach him how to get that vocational skill."

One of the ways the libertarian firebrand, who sits on the board of the Cato Institute, plans to cut costs is to reduce tenure opportunities and benefits for teachers. There are probably few subjects that vex Yass as much as teacher's pay. He asked the audience, "How much do you think the average schoolteacher makes? All we ever hear about is how underpaid they are, how abused they are, and they need more and more money." He then flashed a PowerPoint on the screen that showed Philadelphia School District teachers make $70,600 plus benefits of $46,000 for a total of $117,400 with the national average teacher salary being $57379. He explained, "Benefits is where the real money is. The healthcare is free. The pensions are funded."

Yass seems haunted by ghosts of teachers past. He argued "Now many of these teachers are great teachers. The top teachers would stay. They would probably make even more money in a voucherized system. But many of these teachers are horrible. It is very difficult to be a good teacher. Not everyone has the knack for it. These bottom 25% of our teachers are tormenting our children and they have got to go. That is where a lot of the savings, improvement will come from."

His bete noire is Jerry Jordan, the president of the Philadelphia Federation of Teachers. "Jerry Jordan, head of the teacher's union was asked how come you didn't fire anyone out of the last 3500 people you hired, recalled the co-founder of a global trading powerhouse. "Jordan said well I am good at hiring. So if you believe that you can hire 3500 people and not need to fire anyone, then you don't believe the system needs a change and you are good. But if you believe that's absolutely impossible and that means they are just coddling people who can't do their jobs, then you would be in favor of this change."

Ordinarily, I would say that this flame thrower of an idea would have little chance of being implemented considering the teacher's union likely opposition. But we are in the Trump era. Trump's nominee for Secretary of Education, Betsy DeVos, is a strong charter school advocate.There is only one problem. Yass scoffed at the idea of a Trump presidency in the New York Times so he may have to eat his words before his ideas get a hearing by the President Elect. The question is will he prostrate himself for the kids?