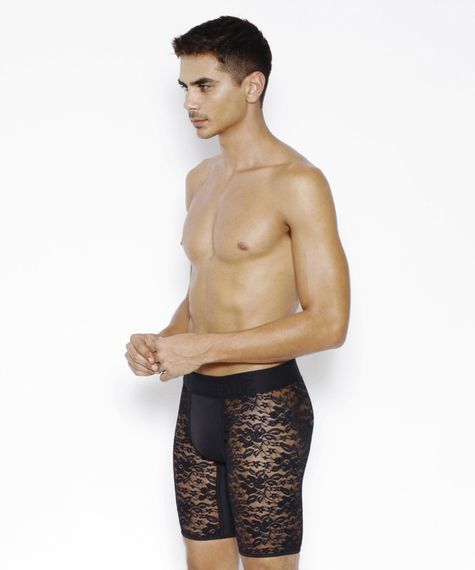 Here's a question you've probably never asked yourself: Why don't men wear lingerie? It's one of those topics that, until now, has never really needed addressing. But Menagerié, an actual lingerie brand for men, is here to change the discourse on gender-specific intimates.

Founded by Roman Sipe in 2014, Menagerié has a pretty obvious etymology, but its mission is more complex. In Sipe's own words, "[We want] to bring more adornment and beauty to men's fashion, but still remind people that it is a brand for men." With that, Sipe acknowledges the flamboyant aesthetic of the brand, but strives to preserve masculinity in his efforts to appeal to men of all sexualities (by way of brief and boxer-short cuts). Understandable, sure, considering lingerie has been marketed only to women for over a century.

Menagerié offers everything from underwear and loungewear to fragrance and even its version of a male waist trainer. Ahead, we spoke to Sipe about male body diversity, the reaction the line has received from customers, and what the heck a male waist trainer actually does. 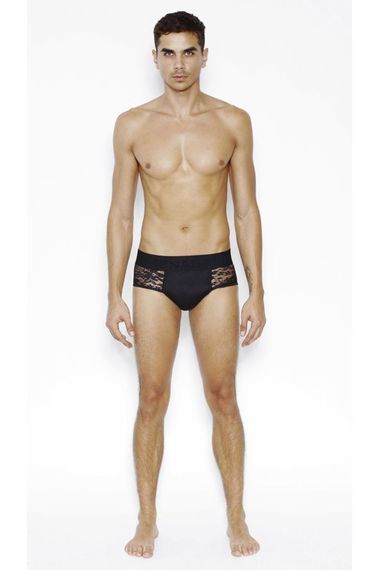 What made you want to make lingerie for men?

"You know that expression 'Create the things you wish existed'? Well, after working in the fashion industry as a stylist for a little over six years, I began feeling slightly unfulfilled. 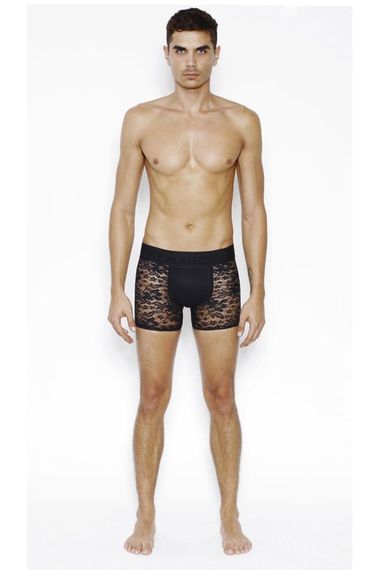 "Designing has always been in the back of my mind. When I decided I was ready to pursue design, I wanted to develop a concept that wasn't heavily explored. I decided that I would start in my own closet when looking for ideas. What was missing? Was there anything I didn't currently own that I wanted?" 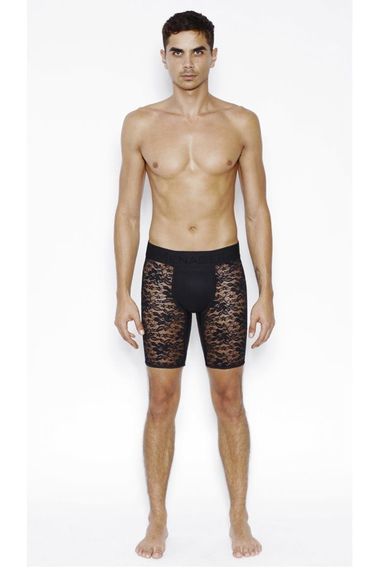 "I ended up in my underwear drawer, and realized it was the most unfashionable and disorganized area of my closet. However, I had an unopened package that contained one pair of black Calvin Klein silk knit boxer briefs. I had been saving these for so long that I forgot about them. I put them on right away, and after prancing around in them, I sat down and just started Googling. I first typed 'men's silk underwear' in the search bar, and after scrolling through two or three pages, I came across a pair of lace underwear for men. I then searched 'men's lace underwear.' Page by page, I looked for a lace pair of underwear that I might actually consider purchasing, but found nothing." 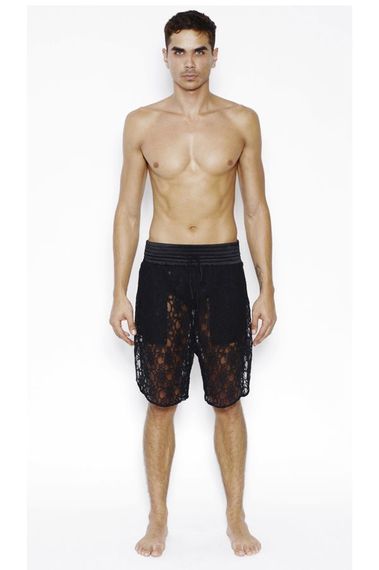 "I went on to search 'men's lace lingerie,' and there they were. Versace's fall 2013 collection included one pair of lace boxer briefs that were everything I imagined. Unable to find the Versace underwear anywhere online, I soon realized they weren't actually put into production in lace, only mesh. I moved on to see who was actually focusing on men's lingerie and noticed no one was taking that leap in the way I envisioned it should be done. That's when I decided to create Menagerié." 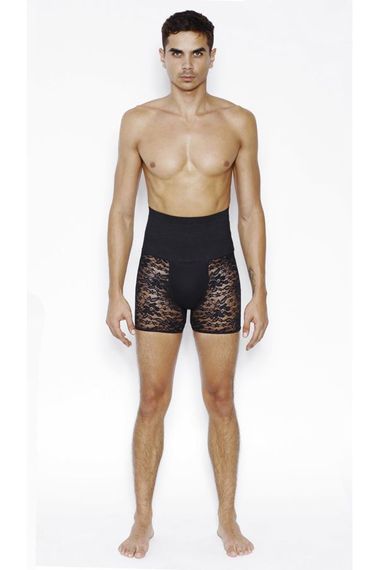 What was your first prototype?

"I introduced the brand as 'men's lingerie' with three pairs of classic lace underwear: the Low-Rise Trunk, the Boxer Brief, and the Cycle Short. These were the first samples created, and they took about four months to perfect. Once the samples were complete, they were sent into production and I began selling them individually or as a three-pack. As sales began to pick up, I was able to create coordinating pieces and start forming a collection of formal nightwear for men." 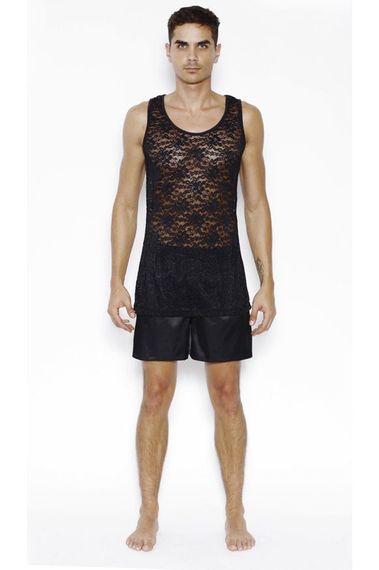 What has been the reaction?

"People either love it, hate it, or find it interesting. The reaction from heterosexual men is pretty much what is to be expected. Most don't think they need it, or couldn't see themselves actually buying a pair of lace underwear. However, there are a few who find it intriguing and simply ask things like, 'Well, are they comfortable?'

"The homosexual community grasped the concept. It seemed that most were happy that they now have options that are classier and more elegant than what's currently on the market. However, I've been most impressed with how well women took to the brand. In the early stages of sales, I was able to track all my orders by simply looking up the customer's name on Facebook or Instagram. I was shocked to see that more than half of the orders placed were by women. Whether they were buying for themselves, their significant other, or their best gay friend is beyond me. I also noticed a lot of women tagging guys on Instagram in our posts, saying things like, 'OMG, I could see you in these!' or 'This made me think of you.'" 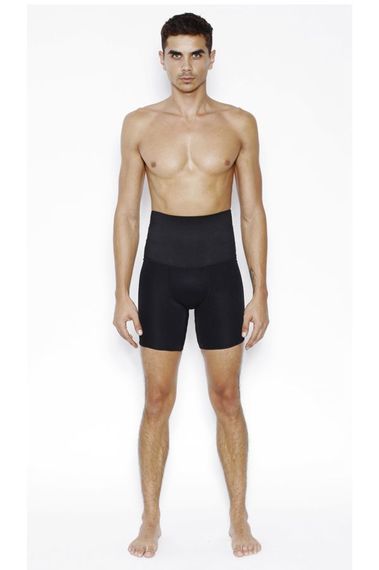 What's with the waist trainer?

"Our High Waist Control Boxer Brief can be compared to Spanx or other shapewear garments whose main purpose is to reduce the waist size by one or more inches. However, it also serves as back support and helps with posture." 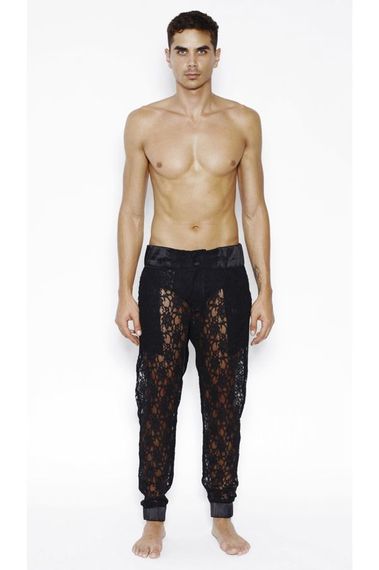 What are your thoughts on genderless or unisex fashion?

"Though genderless fashion has been causing a buzz the past couple of seasons with Louis Vuitton, DSquared2, and Zara, I personally believe we have a while to go before we actually see the trend move off the runways and into the streets. You can't help but notice that most of the items being sold as 'unisex' are traditional men's pieces that are easily picked up by women, like T-shirts, sweaters, jeans, and jackets. While we're happy to see men walk down the runways in skirts and heels, these pieces are not readily available, and the runway styles certainly aren't sold at reasonable prices. They aren't so easily accepted by American culture, either."