This kitty is living it up, sailing the high seas.

Amelia the Tropicat lives with her human, avid surfer and California native Liz Clark, on a sailboat. The pair have been sailing around together since 2013, and the kitty's gained her own following for her life as an adventurous, furry sailor.

because above all else, it's feeling connection with others that really enriches our lives ... especially with beings quite unlike ourselves... @patagonia_surf @mizulife @loveavasol @ecoflex_ @zealoptics #tropicat #weareone

"She has a lion heart!" Clark, who is currently in Japan, told The Huffington Post. "It’s really fun to see the way that her adventures resonate with people, possibly because of her courage to step outside of her cat comfort zone."

#Ameliathetropicat tells all in her freshly released short film by my friend and fellow earth and animal lover @tevaperrone!! ... link in my profile... #loveandfreedom #forallanimals #beaStevie

Clark, who's spent about 10 years sailing around the world in her boat, "The Swell," has traveled along the western coast of Mexico and Central America as well as the South Pacific, BuzzFeed reported.

She told the Dodo that she found her feline friend in an abandoned house in Polynesia. Though she brought Amelia aboard to feed her until she could find a suitable owner for the then-6-month-old kitten, she eventually decided that the cat was at home with her. Living afloat the water took a bit of getting used to, but Amelia soon adapted to life with Clark.

Clark and her furry companion like to go on walks on the beach, hike in the mountains, visit friends and go to open-air restaurants, in addition to sailing around. Amelia also has another fun hobby.

“On calm nights, she fishes off of a soft-top surfboard attached to the side of Swell with a small light that attracts fish,” Clark told BuzzFeed News.

me and Tropi sending out all our infinite christmas love and positive vibes to you and yours!! ❤️💚😻may all beings everywhere be happy and free....so stoked my family decided to give to each others favorite charities this year!! Miss you my dear Clark family, love you all so much!! and thank you to all my family across the world who have taken me in on holidays abroad. #weareAllonebigfamily #givingisgoodliving @leenbean11 @bkulinsk @jamesclark78 @captainmillie @dadmiral1 ❤️❤️❤️❤️❤️❤️❤️❤️❤️❤️❤️

The dream life that Clark and Amelia the Tropicat live sounds almost too good to be true. The captain explained that she's able to support herself and her kitty through various sources of income.

Amelia gloating over her first official fishing success...🐟 i have tried to make her a few different kinds of floating platforms to fish from, but she never liked them. recently a friend gave us a soft-top surfboard and it turns out that #Tropicat finds it up to her standards. woke up to 2 of these on the floor of the cabin...she ate one, then carried this one around all morning...🏆 #thanksGael!! @patagonia_surf @mizulife @loveavasol @zealoptics @ecoflex_

"I make enough income to keep living this way through my brand ambassadorships with environmentally conscious businesses, especially Patagonia, Inc, who has supported me from the beginning of the voyage," she told HuffPost. "I also write articles, take photos, pick up odd jobs and keep a blog of my adventures."

Clark explains that ultimately, there's a lot we can all learn from Amelia's bravery and knack for exploration.

Apparently it's National Cat Day, so here's a huge salute to my #felineFirstMate, elegant muse, and best furry friend #AmeliatheTropicat. the adventures are so much more fun together!!! and while we're on the subject--a huge high five to @uber for partnering with @humanesociety in such a unique and wonderful way to encourage kitten adoptions on car rides!!! We are not above animals, we must #learncompassion and end animal suffering!! 😽 Favorite singlefin by @aquaticoddities and earth-friendly bathing and everything soap by @drbronners!!

"The unlimited possibilities that arise by living with courage and passion are so well represented in her adventures," Clark said. "She is ... a living example of the messages I am trying to spread about following your dreams." 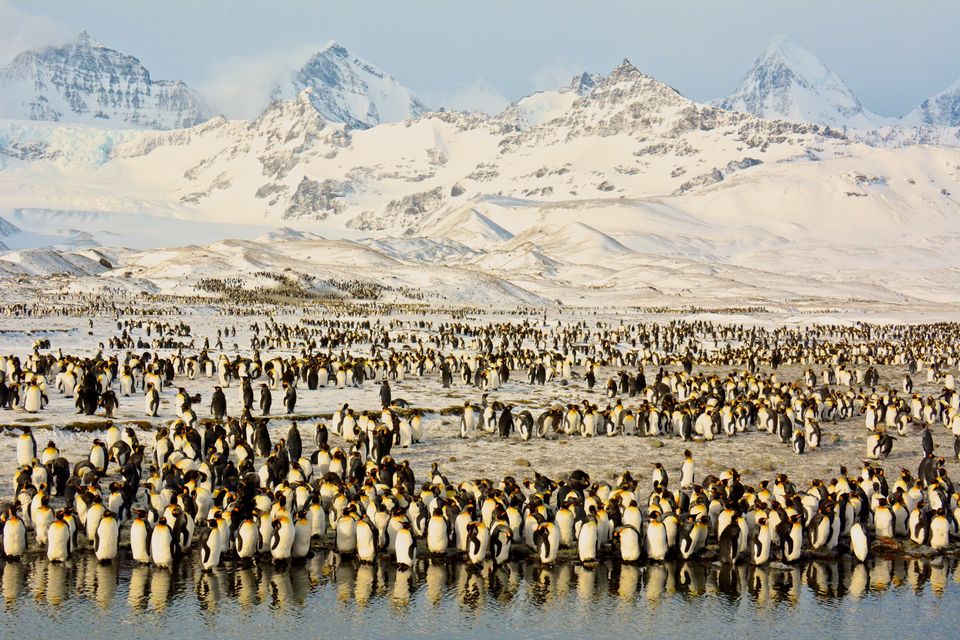 1 / 10
South Georgia Islands
Title:&nbsp;<strong>Peaks &amp; Penguins in Antarctic Sunrise&nbsp; &nbsp;</strong><br><br>"Stunning peaks and thousands of King Penguins on South Georgia in soft early sunrise. The photography challenge was to resist shooting only penguin&nbsp;close-ups (very tempting for sure) and step back occasionally to be equally amazed by the landscape in which they live. Special Bonus: It was 100 years to the month that Shackelton's boat (Endurance) finally went under the Antarctic pack ice in Nov 1915, precipitating his epic traverse of South Georgia, before finding help at nearby Stromness (a year later)."
Shivesh R.