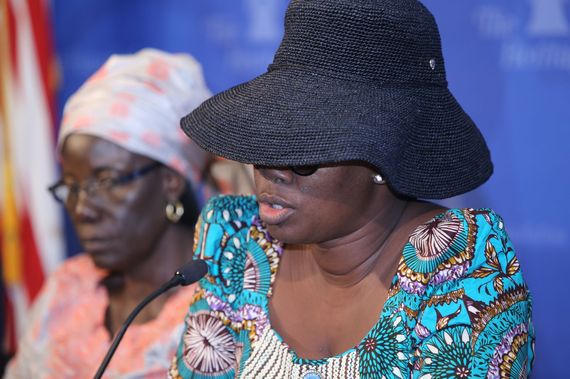 Mary, the mother of one of Nigeria's kidnapped Chibok girls, speaks in Washington DC on Thursday, June 9, 2016.

For the first time, one of the mothers of Nigeria's kidnapped Chibok schoolgirls is here in Washington DC, sharing her story firsthand and speaking out for the release of her daughter and the more than 200 other Chibok school girls who remain in captivity.

Last September I met with ten of the fathers of the kidnapped Chibok girls in Jos, Nigeria. Today, I spoke with one heartbroken mother.

Her daughter's 18th birthday was yesterday, Mary* tells me. She never expected that it would be spent held in captivity by Boko Haram.

"I just want my baby girl back," Mary told me, her voice quivering with emotion. "For 26 months, day and night, I have been thinking about my baby, but she is nowhere to be found."

Brought to Washington DC by the 21st Century Wilberforce Initiative, Mary joined the launch of the group's new report, Nigeria: Fractured & Forgotten. The report addresses discrimination and violence along religious lines throughout Nigeria. Mary spoke on her own experiences as the mother of a kidnapped girl, and the ongoing heartbreak endured by the Chibok families. Due to security concerns, she concealed her identity while in front of the camera, wearing a hat and sunglasses throughout the duration of the event.

Since the return of Amina Ali, the first missing Chibok girl to emerge after the mass kidnapping, the parents of the girls are living in a new desperation, waiting to hear from Amina about her daughters' plight.

According to Mary, one of the fathers of the Chibok girls, Yakubu Nkiki Maina, met with Amina and was able to learn some information on the whereabouts of the girls. Some have been forcibly married, according to Amina, while others are in the Sambisa Forest, reportedly living out in the elements.

The idea of her daughter living outside for 26 months, being subjected to abuse by militants of the world's deadliest terror group, brings Mary to tears.

"I want the global community to assist us," she pleads. "Please assist us."

Documenting the brutal onslaught of Boko Haram and the terror perpetrated by Fulani militants, the 21st Century Wilberforce Initiative report says that "what is unfolding in northern and central Nigeria is one of the gravest current humanitarian crises in the world."

When asked how the mothers of the girls are coping with the mass kidnapping two years later, Mary looks down.

"It is a great destruction, what the mothers are suffering," she says. "They have no strength. Most of the Chibok girls are [among the] last born in their families, and so their mothers are older. We have many parents on their sick bed."

In the last two years, at least 18 of the parents of the Chibok girls have died.

Mary is among the younger parents of the kidnapped girls. She has four younger children - all of whom have suffered immensely after their older sister was taken by Boko Haram.

After the kidnapping of their sister, Mary says her younger children were terrified of going to school. The schools in the area all shut down, their closure fueled by fear of another mass kidnapping.

When the family moved to Abuja from Chibok, Mary says her children's fears over school began to dissipate. "By the grace of God, they are now in school," she says.

Every parent comes up with plans and ideas for their children, and Mary is no different. In fact, she told me, she has dreams for all of her children. One thing her dreams never included was her oldest daughter's kidnapping at the hands of a deadly terror group.

"I have a better plan for her but God has not fulfilled it for me yet," she says.

Mary's family is not alone in their dire challenges. Many of the Chibok families have endured intense trauma as a result of the kidnapping, their children are afraid to attend school, and many of the families still live in danger of regular attacks by Boko Haram.

Open Doors works closely with the families of the Chibok girls in Nigeria, providing trauma counseling and practical support. We've recently launched an advocacy campaign, asking President Obama to visit Nigeria (in nearly two full terms, President Obama has not yet visited Nigeria). We're asking him to engage with Nigerian President Buhari on crucial human rights issues, including urging him to investigate claims that prominent politicians within the country are funneling money to Boko Haram.

Listening to Mary share her story, I'm hoping that more people will become aware of the tragic plight of the Chibok girls and their families - and take action to help them.

When I was in Nigeria meeting with the fathers of the Chibok girls several months ago, one father told me, "Sometimes, for a short time, I can feel okay, when I'm with my family or when I'm with my church." He paused, his voice breaking. "But when I'm alone, it all comes back."

As the hours, days, months, and years drag on, Mary clings to the hope that her missing daughter will be found.

"Please remember our girls," she pleads. "We really need your prayers that our girls will be found."

*Mary's name has been changed for security purposes.