The United States has a long history of using mean-spirited and often brutal laws to keep "certain" people out of public spaces and out of public consciousness. Jim Crow laws segregated the South after the Civil War and Sundown Towns forced people to leave town before the sun set. The anti-Okie law of 1930s California forbade poor Dustbowl immigrants from entering the state and Ugly Laws (on the books in Chicago until the 1970s) swept the country and criminalized people with disabilities for allowing themselves to be seen in public. 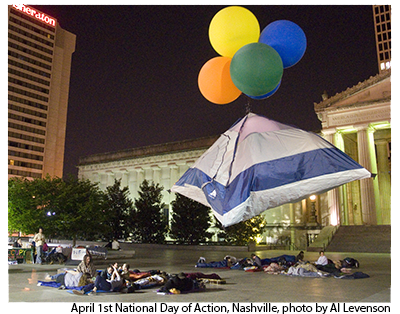 Today, such laws target mostly homeless people and are commonly called "quality of life" or "nuisance crimes." They criminalize sleeping, standing, sitting, and even food-sharing. Just like the laws from our past, they deny people their right to exist in local communities.

In June of this year, Rhode Island took a meaningful stand against this criminalization and passed the first statewide Homeless Bill of Rights in the country. The Western Regional Advocacy Project (WRAP)--a West Coast grassroots network of homeless people's organizations--is now launching simultaneous campaigns in California and Oregon. Rhode Island will only be the beginning.

Today's "quality of life" laws and ordinances have their roots in the broken-windows theory. This theory holds that one poor person in a neighborhood is like a first unrepaired broken window and if the "window" is not immediately fixed or removed, it is a signal that no one cares, disorder will flourish, and the community will go to hell in a handbasket.

For this theory to make sense, you first have to step away from thinking of people, or at least poor people, as human beings. You need to objectify them. You need to see them as dusty broken windows in a vacant building. That is why we now have Business Improvement Districts (BIDs) with police enforcement to keep that neighborhood flourishing by keeping poor, unsightly people out of it.

We have gone from the days where people could be told "you can't sit at this lunch counter" to being told "you can't sit on this sidewalk," from "don't let the sun set on you here" to "this public park closes at dusk" and from "you're on the wrong side of the tracks" to "it is illegal to hang out" on this street or corner.

Unless we organize, it isn't going to get much better soon. Since 1982, the federal government has cut up to $52 billion a year from affordable housing and pushed hundreds of thousands of people into the shelter system or into the street. Today we continue to have three million people a year without homes. 1982 also marked the beginning of homelessness as a "crime wave" that would consume the efforts of local and state police forces over the next three decades. Millions of people across the country sitting, lying down, hanging out, and -- perhaps worst of all - sleeping are cited in crime statistics.

WRAP and our allies recently conducted outreach to over 700 homeless people in 13 cities; we found 77% of people had been arrested, cited, or harassed for sleeping, 75% for loitering, and 73% for sitting on a sidewalk.

We are right back to Jim Crow Laws, Sundown Towns, Ugly Laws and Anti-Okie Laws, local laws that profess to "uphold the locally accepted obligations of civility." Such laws have always been used by people in power against those on the outside. In other words, today's Business Improvement Districts and Broken Window Laws are, at their core, a reincarnation of various phases of American history none of us is proud of.

And they reflect a political voice now openly entering the political and media mainstream that dismisses social justice as economically irrelevant and poor people as humanly irrelevant.

This is not about caring for or even advocating for "those people." This is about all of us. As Aboriginal leader Lilla Watson said, "If you have come here to help me, you are wasting your time. But if you have come because your liberation is bound up with mine, then let us work together." If you are not homeless, if you are not the target now, then understand that you are next. Isolated and fragmented, we lose this fight.

But we are no longer isolated and fragmented. On April 1, WRAP and USCAI (US Canadian Alliance of Inhabitants) sponsored a Day of Action in 17 cities. We are one of hundreds of organizations and allies, from Massachusetts to NewYork and from Tennessee to California, all separate but all working together to give meaning to social justice and protect the civil and human rights of all of us.

We can only win this struggle if we use our collective strengths, organizing, outreach, research, public education, artwork, and direct actions. We are continuing to expand our network of organizations and cities and we will ultimately bring down the whole oppressive system of policing poverty and treating poor people as "broken windows" to be discarded and replaced.