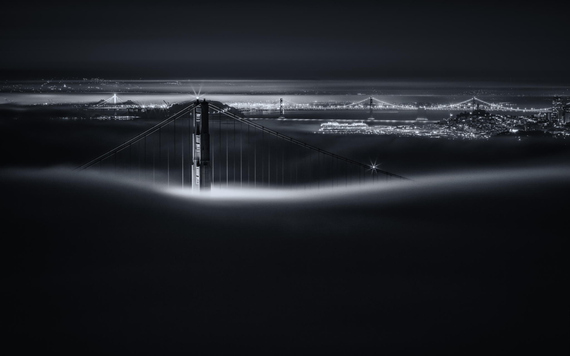 Roiling fog, cars speeding across iconic bridges, late night cityscapes, all of these are commonplace in a city time-lapse. What makes Gotham City SF different is that all of this happens in black and white -- almost unheard of in time-lapse these days -- with an original soundtrack worthy of the next TRON movie.

But don't take my word for it, check it out for yourself:

One of the most intriguing details about Gotham City SF is how long this time-lapse has actually been in the making.

This idea came from the aether; it emerged over time. Several years ago (2012), while exploring my passion for black and white photography, I found myself wandering into a look I call 'Gotham'.

I have a passion for time-lapse as well, so it wasn't long before the two processes started to merge in my mind, and the concept for Gotham City SF was born! Over the intervening years I have collected and edited this footage while juggling my freelance career and time working at Lytro.

The resulting footage was put together using shots like these:

In case you're curious about gear, Toby says all of the images used in the time-lapse were captured with either a Canon 6D or a 5D Mark III and "a variety" of Canon L glass. The motion controlled shots were helped along by an eMotimo 3-Axis system as well as a Kessler Shuttle Pod Mini 8 foot dolly.

Music for Gotham City SF was composed by 16-year-old James Everingham from the UK, and branding credit belongs to David Hultin.

To learn more about this time-lapse and see some of the spectacular stills that made it up, be sure to visit the Gotham City SF webpage. And if you'd like to browse through more of Toby's work, visit his 500px profile or give him a follow on Facebook.

This post originally appeared on the 500px ISO blog.