He was not hard to spot. In the shadow of Oxford Castle, under the dome of the Bodleian Library, or from the tower of St. Mary's Church, the vivid feather headdress was impossible to miss, as was the face of the man who wore it, Chief Tashka Yawanawa, in Oxford, England, earlier this month for the Skoll World Forum on Social Entrepreneurship. Here, where the history of the place is somehow strangely still alive, his headdress stood for a different kind of history. Not one of bards and decades upon decades of scholarly thought and soaring architecture, but an even older history - of forests and the people who make the trees and the land their home.

Tashka made the long journey from his village in the northwest corner of Brazil to join more than 1,000 social entrepreneurs at the conference. There, Malala Yousafzai, the Pakistani girl shot in the face by the Taliban for speaking out about girls' education, told a packed auditorium of her compulsion to speak for those who could not speak for themselves. Experts spoke on impact measurement, sustainable development, and "cross-sector peace-building."

And in a centuries-old pub, over ale and steak pie, Chief Tashka spoke of the 800 members of his people, the feathers of his headdress brushing against the low stone ceilings of the place. The Yawanawa, like other indigenous people, are struggling to keep their way of life and traditions alive in the face of serious threats, such as illegal logging and mining. They are fighting for the rainforests, often described as the "lungs of the planet." 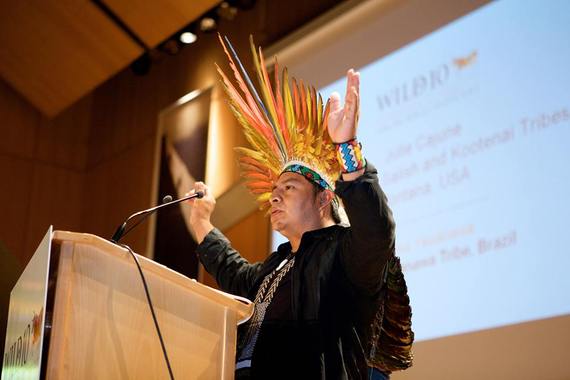 Tashka spoke of his people's "Plan de Vida," or Life Plan, a document that maps out their growth over the next 50 years, identifying strategies for key areas, including health, education, and security. It is a dynamic map for the future, deeply informed by traditional knowledge and values. The Plan de Vida is an invaluable instrument, vital to the Yawanawa's work as stewards of the forest. Tashka spoke of how the values embedded in the Plan were vulnerable to the pressures of those from the outside, who would, in their short-sightedness, strip the land of its very being.

And as improbable as it might seem, that vulnerability is what brought Tashka to the Skoll conference and the social entrepreneurs who for five days swarmed the cobblestones of Oxford - to see if somehow he and other indigenous leaders could work with modern markets to save the world's forests.

Throughout the week, conference participants parsed economic markets in the context of social entrepreneurship in lecture halls and seminar rooms, discussing hybrid business models, "Profit With Purpose," smallholder productivity. How does the Yawanawa Plan de Vida, then, fit in with such ideas, with emerging markets? In the evolving realities of indigenous people in a world of fast change, how are they absorbing the changes and continuing to lead?

How can a remote, isolated, tiny group of forest stewards embrace today's technology and the business models of modern markets - and more importantly, how can emerging financial instruments (like the forest-carbon financing mechanism REDD) embrace the values and structure of a Plan de Vida?

The answer to these questions may contain the kind of conservation success story that can seem elusive at times. It is in the intersection of these two elements - the old and the new - that solutions on climate change are emerging. One such effort is a new and unique initiative that will empower forest-dependent communities to engage equitably and productively with new sources of finance, including REDD+ and other compatible initiatives. In shorthand, it is called AIME - which stands for Accelerating Inclusion and Mitigating Emissions - and it is a partnership of environmental and indigenous organizations that we at Forest Trends have been leading, thanks to the generous support of the United States Agency for International Development (USAID).

It's useful to identify the "sweet spot" that exists when technology and the modern world meet the forest. The Yawanawa are using Android phones to collect and transmit valuable data about the forest to the government and others, sophisticated mapping systems of their lands, and the Internet to communicate far beyond the borders of their territories. The modern marketplace, in turn, is being led by traditional cultures to think more broadly into the future, realizing that entrusting the asset that is the rainforest to indigenous people is the smartest move they can make.

On Earth Day this year, let us focus on this sweet spot. As the social entrepreneurs think big, as the economists crunch numbers, and as the scientists cast gloomy eyes on the burgeoning climate crisis, let us embrace the values that have sustained indigenous people for so long - a capacity for evolving and adapting with a deep respect for the traditions of the past. As Chief Tashka's headdress symbolizes the millennial tradition of protecting one of Earth's most valuable resources, we can be optimistic that with the right strategies, we can solve some of the most pressing climate change and broader environmental issues of our time. As Tashka said, "Each one of us has a responsibility to care for Mother Earth." 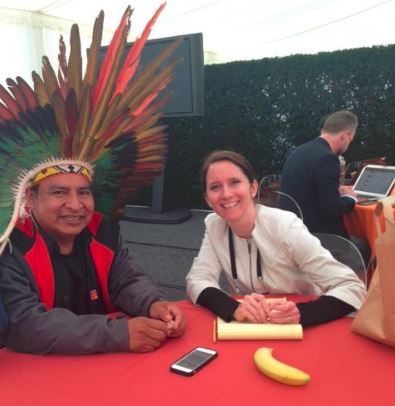 Chief Tashka Yawanawa in Oxford
with Ann Espuelas of Forest Trends, who filed this report.