We are often told that the United States is more divided now than at almost any time in our history. If you're following the presidential election, it's easy to see what they mean. And it's not just in America.

Scanning your Twitter feed or browsing Medium, the world can look very chaotic and deeply polarized: devastating terrorist attacks in Turkey, refugees unwelcomed in Europe, and continuing armed conflict around the world. This sense of division can make us feel separate, alone and uncertain about the future.

It's understandable to feel this way. But it also misses a lot of what's true about the world today. Although dangers today are real, data show that armed conflicts and related casualties are at the lowest levels in world history. We must be focused on continuing to reduce violence and inequity in our world, but we are safer than we've ever been. We are also more connected globally as individuals and nations than at any time. And although it may not always seem like it, we actually know and understand more about each other than ever before.

Prove it? Let's take climate change. The problem couldn't be growing any faster. Just a month after world leaders agreed to a goal of limiting global temperature increase to no more than 1.5C, global temperatures crossed that threshold for the first time in January. And then again in February. At the same time, winter Arctic sea ice appears to have hit a new low at levels 400,000 square miles below historical average. Let's say that again -- 400,000 square miles below average. Closer to home, the Alaskan fire season has just begun -- two months early. And the newest tourist attraction in Miami is 'sunny day floods' when ocean fish swim down the streets after bubbling up from the sewers at high tide. This real world truth led a bipartisan group of 21 mayors from south Florida, to demand that that questions about climate change be asked at the presidential debates. This is not your son's or daughter's climate change -- it's here today.

That doesn't sound like good news, you say? It isn't. It is some of the worst news that we aren't talking about. But luckily, it's only half the story.

Here's the good news, and it's huge:

But my favorite version of this story isn't about one group of us, but about all of us. It is about breaking down old barriers and connecting with each other and Earth like never before. Last December in Paris, all of the nations on Earth pledged to act together to protect the most vulnerable communities among us from the impacts of climate change. They recognized that the unprecedented commitments on the table were still not enough, and they agreed to do even more together in the future.

We are seeing this global movement grow. As we saw last week when Canada and the US reached a new post-Paris agreement, more and more of the world's response to climate change is happening across national borders and as traditional rivalries are forgotten. Civil society groups are working together like never before to push for a just transition to renewable energy that leaves dirty fuels in the ground. Businesses are developing collaborative approaches to ending deforestation and switching to clean energy that commit all of them to do the right thing, together. And people are starting to understand that we are all in this together. That countries like the United States, with more responsibility for the pollution driving climate change and more capacity to respond, have a greater role to play including by supporting the new Green Climate Fund.

This Saturday, March 19th, is the tenth anniversary of Earth Hour, a global movement that has reflected this shift toward a more connected, collaborative approach to facing the climate crisis. At 8:30 pm local time, millions of people, hundreds of cities and some of the most iconic places on Earth (from Big Ben in London to the Eiffel Tower to the Empire State Building and the Golden Gate Bridge) from 178 countries will be joining this global hour of solidarity. More importantly, they will be making 'Climate Resolutions' pledging to do more to fight climate change after the hour is over.

Some things in the world today are scary. But don't let that hide some truths: on important issues like climate change, the world is coming together and we've never had more momentum. Join the movement this Saturday. 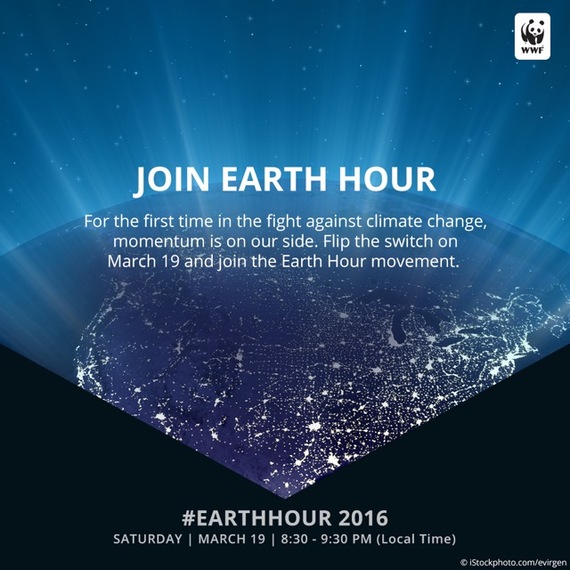