Wonder why I joined #VetsVsHate? Why I do all this to oppose a candidate that is probably going to lose anyway? This is why.

This happened two days ago at the local mosque back home in Rhode Island. 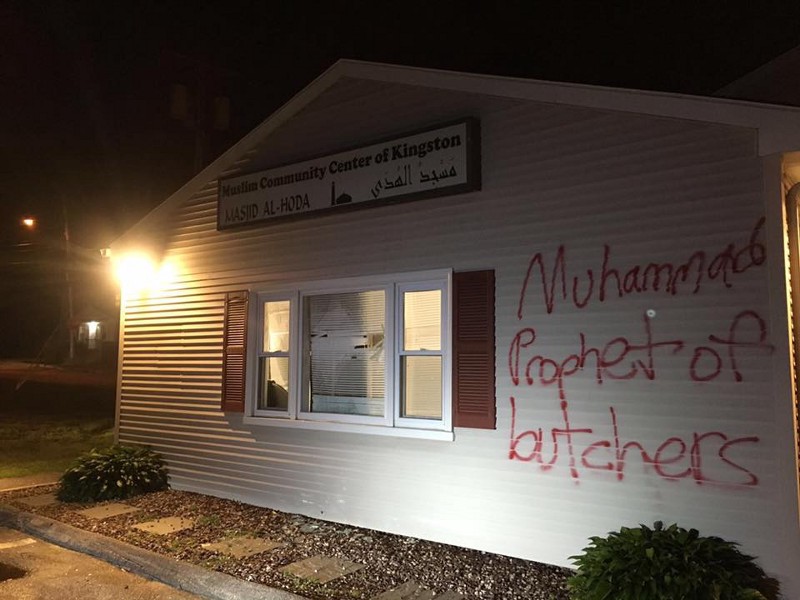 This kind of un-American hate doesn't come out of nowhere. While it is impossible to blame demagogues like Donald Trump for individual acts of bigotry and violence, he is responsible for the rhetoric that has normalized, inspired and empowered the worst elements of our society by using fear to divide us in his grasp for political power. As a British newspaper wrote in the aftermath of the murder of a member of Parliament who defended the human rights of Muslim refugees, you can't blame politicians for the weather, but they created the climate which allowed it to occur.

Trump is responsible for the rhetoric that has normalized, inspired and empowered the worst elements of our society by using fear to divide us...

In our fraught political discourse, shrill comparisons to Hitler are generally overwrought, but there comes a time when it can no longer be seriously avoided. I believe now is one of these times. In the past week, in an attempt to woo Donald Trump's favor for the selection of Vice President, Newt Gingrich called for every American Muslim to be given a public test, asking them if they faithfully adhere to their religion, and, if they answer yes, Gingrich said they should be deported. To where these American citizens would be deported is unclear, but the message was not. It said "you are not welcome here. You are not one of us."

Donald Trump, Gingrich, and other Republicans have called for massive, invasive, blanket surveillance on all Americans who happen to worship a particular God. Trump's signature policy is to "ban Muslims," including American citizens born here from immigrant parents, including refugees fleeing oppression, including workers with the skills to help keep our economy vibrant. This policy is so contrary to the values our country was founded on that Trump's own Vice Presidential pick, Mike Pence, called it "offensive and unconstitutional."

Trump has not just tolerated, but actively embraced racism and bigotry amongst his supporters, sharing content on social media that was literally created by neo-Nazis, retweeting white supremacists who talk about "white genocide," adopting a campaign slogan invented by fascists who supported Hitler, appointing an open white supremacist to his delegate slate in California, and using racist rhetoric so blatant he's been gleefully embraced by neo-Nazi and "alt-Right" hate groups, as well as the KKK. Meanwhile he's responded to criticism by literally banning entire press organizations, and explicitly encouraged violence against peaceful protestors, saying he would personally pay the legal fees of supporters who attacked them and beat them bloody.

This is beyond the normal partisan bickering. This is beyond the usual debates over whether we should raise taxes or lower them, cut welfare programs or the defense budget. This is not a normal election, and we must not allow it to become normal, must not allow ourselves to slip into the normal patterns. This is an existential moment for this country that tests what we really stand for.

This is beyond the normal partisan bickering. ... This is not a normal election, and we must not allow it to become normal...

My home state of Rhode Island was founded on religious liberty. Now we see places of worship vandalized and citizens threatened for the simple act of worshiping according to their beliefs. I served in the Marine Corps alongside Muslims, and also alongside refugees whose Muslim families fled oppression in Iraq and Eritrea. These Marines were no less American, no less citizens than I am. They are no less patriotic, and no less deserving of the liberties our Constitution grants us, and which we swore to defend.

I can't stand by. It's not enough for me to quietly vote against the likes of Donald Trump. His ideology of hate and divisiveness must be utterly defeated, and his tactics of using fear to turn Americans against one another must be delegitimized completely.

To my conservative friends, you don't have to like Hillary Clinton, but you can at least be confident that our country would survive a Clinton presidency. I honestly am not sure I can say the same for Trump.

This week, I head to Cleveland to go to the Republican National Convention. I'll be joining members of #VetsVsHate from around the country to make our voices heard. While I'm there, I'll be thinking about this little Muslim community center in my little home state. I hope that together we can overcome irrational fear and make Rhode Island, and this country, once again a haven of toleration and Liberty.