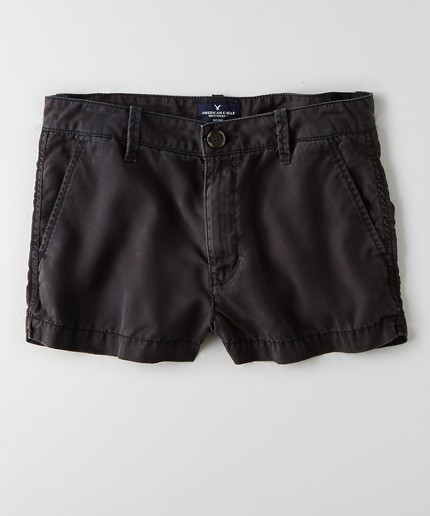 Vanity and inconsistent sizing is, unfortunately, not a unique issue: You'd be hard-pressed to find a universal size 4, 6, or 8 across various retailers found on your average mall floor plan. (Amy Schumer even spoofed that frustrating reality in a recent Inside Amy Schumer sketch.) It's not as common to encounter this issue with threads from the same retailer. But that's what one shopper says she experienced at American Eagle Outfitters, and her story has been getting a lot of attention on social media, Today reports. 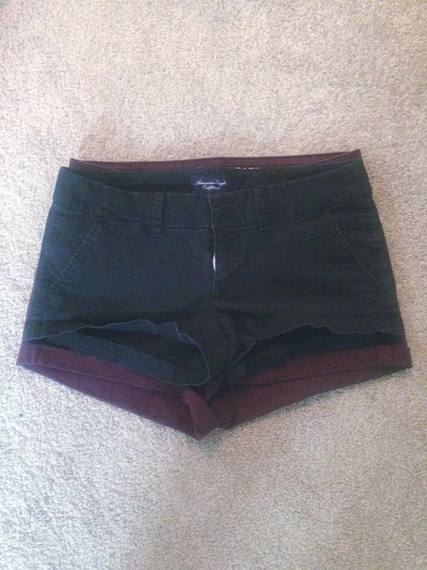 Missy Rogers posted an image on Facebook of two pairs of shorts she says were purchased from American Eagle, two years apart. Despite seemingly having the same waistline and width, she writes that the black style (bought back in 2014) is labeled as a size 4, while the maroon pair, spotted on the selling floor recently, is tagged as a size 10. "How is it that what was considered at size 4 is now the same dimensions of a size 10?" she asked in her post. "How small has a size 4 become?"

Rogers shared an anecdote about going to an American Eagle store and trying on the maroon shorts in a size 4, as she normally has in the past. However, during this visit, she was disheartened when she couldn't fit into them and had to go up three sizes -- only to come home and compare the waist bands and realize they were essentially the same. "Once I brought the shorts home and compared, I realized that size is literally just a number," she wrote.

Rogers' fitting-room revelation (or ire) will, she hopes, bring attention to the subtle messaging -- not just at American Eagle, but in the retail industry at large -- that sizing can have on younger shoppers. "I think it's important to show that clothing size should not define your beauty. If a size 10 is what a size 4 used to be, what message are you implying to younger girls?" She concludes that size "is literally just a number printed on a tag" and that it's more important to feel confident than to obsess over a seemingly arbitrary designation. The message seems to have resonated: The post has been shared over 72,500 times in less than a week.

"Although it may just be a number, we grow up under the perspective that anyone who fits in the smaller sizes is more beautiful and closer to being 'perfect' than those in the larger sizes," Rogers told Today. She poses the question: "Isn't it more important to look after the physical and mental health of the population rather than printing a random number on a tag?" This isn't the first time popular retailer is questioned for its sizing practices: J.Crew, Gap, and Banana Republic were called out by FitBay last year for this very reason, StyleCaster reported.

Chad Kessler, American Eagle's global brand president, echoed Rogers' concern in a statement obtained by Refinery29. "We agree fully with Missy that women are so much more than numbers, which is why we are so strongly committed to body positivity," he wrote. "Like every retailer, we strive for consistency and clarity to help our customers make decisions. We've reached out to Missy to get her feedback on her shopping experience and look forward to engaging in a discussion around this important issue."

Sizing aside, the brand has put a lot of focus on body positivity and it's not going unnoticed. Its Photoshop-free #AerieReal lingerie campaigns have been widely praised and have proven to be quite profitable for the company. (Its most recent quarterly report was strong, which is notable, considering other fashion retail companies appear to be struggling.) The retailer hit a snag in its inclusive messaging with its criticized April Fool's hoax, but has since reiterated its commitment to zero retouching. American Eagle has been at the forefront of size inclusivity as far as mass market retailers go, and inconsistent sizing remains an issue that a number of retailers deal with (and perhaps, should focus on a bit more).