Last year, I was saying, "I'm almost 30" for the few months leading up to my birthday. I remember people kept responding to the admission with apologies and sympathetic, furrowed brows. They would inevitably jump in with some consoling exclamation like, "Oh! I'm so sorry." "Oh, no. You'll be okay." Or my personal favorite, "Oh, I'm not worried about you..."

Everybody seemed to want me to freak out about that particular milestone. And even now, a year later, I still get heckled with people insisting life should be anxiety inducing because I've hit 30. But, everybody -- respectfully and I mean this in the nicest way possible... I must tell you to shut it.

I love my 30s. This age bracket suits me, I think. Lord knows I don't want to relive my 20s. A time spent in a constant state of middle ground. My footing always uneven. Feeling like I was constantly waiting for my life to start. And I'm not saying I have it all figured out now (that's for damn sure), but I am much more aware of the power that I possess. And maybe, more than anything, I've accepted this whole life situation as a moving, changing entity. One without right or wrong. Time, a flow that brings you to the next step. Never able to get there without being here.

Sure, when I was young I thought that by 30 I would have an Oscar and a husband (oy). A house. High thread count sheets. My closet wouldn't be full of polyester blends, and I would be the most conventionally successful person the world has ever seen! Reality is, I live in a "charming" prewar apartment, I'm more singular than I've ever been, and not only is the majority of my wardrobe from the Super Target, my sheets are from aisle 5. Clearly, Nostradamus was a bit better at the whole "predicting with accuracy" thing.

But, In the grand scheme of my younger days, I also had aspirations to be happy and to fill my life with things that I love. And I can tell you, unequivocally, I can check those two doozies off of my list.

Getting older is amazing and incredibly weird. My body is a mystery sometimes, sleep is a hard and fast necessity. My friends are pairing off, moving to (ugh) Jersey. And my brother has spawned another human... I mean, shit is weird! But 30 years of collecting knowledge is pretty cool, too. Tucking lessons away like lint collected in a back pocket. Saved tidbits from parents, friends and strangers. Things I've learned from wild successes and blunt failures. From building relationships and watching some crumble to jagged pieces on the floor of a midtown living room. From sharing quiet, dark parts of myself with people I've trusted (and some who I didn't).

After 30-plus years maneuvering through the world, I now know that attitude is everything. Connection is critical and words are powerful. (Though, so are glances. Ask anyone who's been on a crowded train.) I know never to underestimate the value of a good solid nervous breakdown. That outfits should go, not match. That the thread between people is thin, and a smile at a stranger can change the course of the world, especially if it's before 8 a.m.

I know that the days you really don't feel like it are probably the days you need it most. That many people value money over basic human interests -- and that many people have fucked up priorities. I know that falling in love is insanely fun. It's also insanely annoying. Nothing can interrupt your day quite like a barrage of hormones. I know that almond butter may have more nutrients, but peanut butter absolutely annihilates in a side-by-side taste comparison.

I've come to realize that no matter how hard you try, you can't make people do things. Or feel things. The same is true in the opposite direction, no matter how much you wish it weren't so. I know the universe talks. Listen. That people can surprise you. But you shouldn't count on it. I see that loyalty is an incredible trait. But sometimes nothing will do like a firm, incontrovertible goodbye. I've confirmed PMS is real. And that baggage is inevitable. But that you should be wary of people that keep having to buy new suitcases. And I've found that honesty and authenticity are drama's worst nightmares.

As it turns out some of the age-old (pun intended) stereotypical things are true, too. I've grown to appreciate quiet Friday nights in. Flats. Black coffee. Productive days. I'm most confident in yoga pants on a lazy Sunday morning. And I'm aware that nothing good happens after 2 a.m. I love a good farmers market. Hell, I love a bad farmers market. A gross bar bathroom is enough to make me call it a night. And if you see me doing shots of anything other than wheatgrass, aliens have taken over my body. I love conversation as opposed to chit-chat. And over the years, my parents have become close friends.

I still struggle sometimes with the passing of time, with everyone around me getting older. And, to a certain extent, with the idea that success doesn't look quite like what I thought it would. But it looks like time is pretty damn inevitable. And all the things that I've done and all the people I've known have brought me here. Fingers typing this 30-year-old story to you.

And, I mean, I've got a lot to show for these three decades. I've been through a lot and remained (relatively) sane. I'm pursuing things I'm passionate about, and putting (sometimes hurling) myself out into the world. And I'm capable. I can move through this life with dexterity. (Some days are more graceful than others, but still.) I have to remember that changing course is not defeat. And (not to be so bold, but while I'm pretty sure that I'd blow Anne Hathaway's every performance out of the water) I've accepted that someone else's accomplishments don't mean my failure.

Between getting my own start-up off the ground; auditioning and working as an actor; being Fun Aunt Sarah to a super cute nugget of a human; and writing (including attempting to write a screenplay -- a creative project I'm finally okay sharing with the world), I have so much to be excited about. Every day is a new adventure.

And I get excited thinking about the next 30 years. About how much I can get done. I mean in the past 30 I had to learn to walk, and talk, and make it through high school without getting arrested or pregnant. I don't have to do any of that! So much opportunity...

So, everyone. Yes, I will be okay. And, no. Don't worry about me. Because I am doing fine. I just try to keep widening my eyes. Keep seeing 30-plus-year-old things as if they're new. And I try to meet each day as if life is saying, "Oh hey, You. You're right on time." 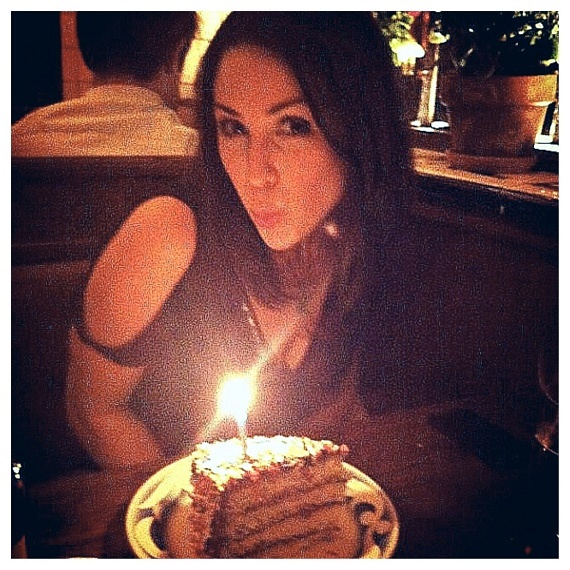