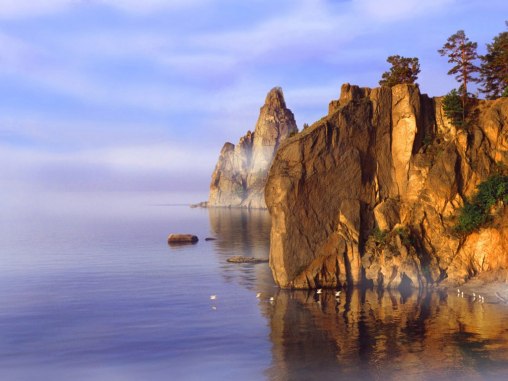 In 2008, a Russian newspaper and TV channel held a massive competition to name the official "Seven Wonders of Russia." Topping the list was a place that few international tourists (less than 30,000 every year) visit due to its remote location: the "Blue Eye of Siberia," the "Sacred Sea," sickle-shaped Lake Baikal.

Though it's less than one-tenth the area of Russia's other amazing lake, the sprawling Caspian Sea, Lake Baikal actually holds more water! Baikal holds fully one-fifth of all the world's liquid freshwater. If all the rivers in the world could somehow be diverted to drain Baikal at once, it would still take over a full year to empty, and the resulting deluge could provide the entire population of Earth with drinking water for fifty years.

Baikal's amazing volume is a result of its depth--it's the deepest lake on Earth. The bottom of the lake is over a mile down in some places. It would be impossible for erosion to carve a lake so deep. Lake Baikal's secret is that it's the world oldest lake as well. It sits on a continental rift zone between two plates of the Earth's crust, which are pulling apart about an inch every year. So Baikal is actually getting deeper as you're reading this.

It's also been called the clearest lake on Earth. In summer, the lake's water is all pristine melted ice from the surrounding Siberian mountains, and observers can see down 130 feet or more. When playwright Anton Chekhov visited the lake in 1890, he wrote, "I myself have seen to such a depth, with rocks and mountains plunged in the turquoise-blue, that is sent a shiver all over me . . . I shall never forget it as long as I live."

Chekhov wasn't the only famous visitor inspired by Baikal's mysterious depths. Director James Cameron dove to the bottom of Lake Baikal in 2010, and announced that the underwater settings in Avatar 2 will be based on the lake's remarkable animal life. In fact, the region is home to more than 2,000 species, from scaleless, oily fishes called golomyanka to unique freshwater seals called nerpa, most of which can be found nowhere but Lake Baikal. Until James Cameron puts them on the moon of Pandora, of course.