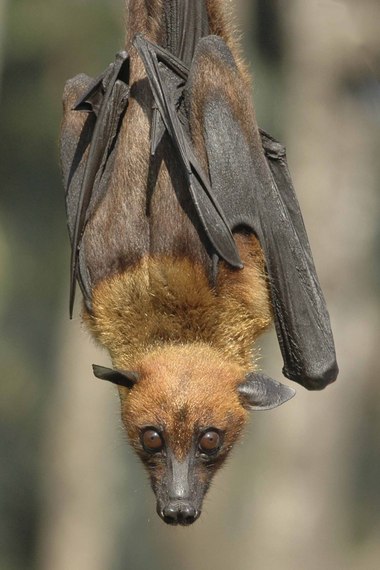 Contrary to creepy Halloween images of witches, ghosts and ghouls, one of the traditional icons of the season -- the bat -- deserves to be a star. For centuries, Chinese cultures regarded bats as the harbinger of good fortune and health, and in Chinese art a depiction of five bats is called "Five blessings," long life, ease, wealth, joy and a natural death. We may lose these blessings soon because bats are disappearing at an alarming rate. They are persecuted, hunted for food and medicine by the hundreds of thousands, and their habitats are being destroyed. To make matters worse, a new disease named white nose syndrome, possibly introduced from Europe, has killed millions of bats in the U.S., wiped out entire colonies in the east and has now spread from New England to Canada and across the Mississippi.

Admittedly, some tiny bats of the new world do indeed drink blood (though only three of the over 1200 bat species in the world do so) and they do have the ability to spread rabies when the disease is not controlled in domestic animals as it should be. In fact, domestic cows and domestic dogs were introduced to the new world by humans and thus created the unnatural contact that allowed rabies to spread. To a vampire bat foraging for food at night, a cow standing out in a field looks like an abandoned 500-pint blood donor bag. Similar unnatural animal contact happens in Asia. A SARS-like virus has been indentified from bats in China and scientists think that viruses jumped from bats to other wild animals in wildlife food markets and led to the SARS pandemic. The newly discovered coronavirus infecting humans in the Middle East is thought to come from bats, and several other viruses that are deadly to animals and humans are found in bats. As we look more closely at bats around the world, we continue to make new discoveries.

But don't blame the bats for our health problems. Diseases like Ebola, Nipah, Hendra and rabies are a result of humans disturbing wild habitats, putting unvaccinated domestic animals in contact with wildlife, and even catching bats for food, folk medicine, and novelty. Yes, Americans import bats illegally from around the world to display and trade as collector's items.

The solution to preventing these diseases and ones we have yet to discover is to reduce our impact on wild places and protect bats from disturbance, hunting and misguided persecution. As Bat Conservation International Executive Director Andrew Walker says, "Humans put their own health and well being at risk when contributing to the destruction of bats and their habitats." Indeed, we still have much to learn from bats -- such as how their immune systems fight off disease from the same agents that kill people and other animals. Demonizing bats and eradicating them is not a viable, cost effective, or ecologically sound approach for our own future.

Actually, the Chinese had it right hundreds of years ago, bats do indeed portend health and prosperity. Every night, insect eating bats consume billions of bugs that damage our food crops and fruit trees, and spread diseases such as West Nile Virus, Dengue fever, yellow fever and malaria. Fruit bats serve to disperse seeds over wide distances to create forest diversity and balance. Half of the trees that make up some tropical forests are completely dependent on bats for their continued existence. Hundreds of plant species are dependent on nectar feeding bats for pollination of their flowers to generate fruit and seeds that feed people and animals. In fact, this same group of bats pollinates the mezcal plants from which tequila is made. Recent economic studies indicate that if we lose bats in North America alone, we will spend at least 3.4 billion dollars more annually to reduce insect pests and ensure pollination for our food crops.

Maybe this Halloween we can begin a new tradition. Mix up a witches' brew, maybe with a little tequila for the adults, and give a toast to bats for their contribution to our well-being. We can tell our children about the value of bats and other creatures of the night, and support efforts to protect and conserve a vast diversity of the animal kingdom that is poorly appreciated and greatly misunderstood. In fact, we have little to fear from bats but they have much to fear from us.