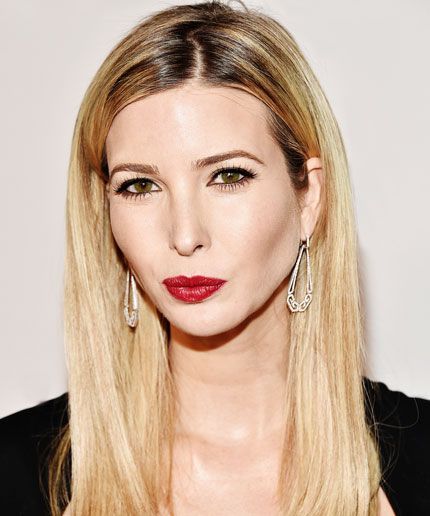 Scores of fashion folks have been showing their support for Hillary Clinton's race for the White House -- just see here, here, and here for the loud-and-clear proof. Between the sequined T-shirts, supportive social-media posts, and donations made by brands and designers, the fashion industry is making a strong case for the first female president. But we have yet to see a brand take on Hillary's opponent quite as directly as Lady Grey, a New York-based indie jewelry line designed by Jill Martinelli and Sabine Le Guyader. The duo sent a hand-written note to Ivanka Trump after she apparently placed a personal order from the brand.

On Tuesday evening, the jewelry brand tweeted a picture of a wrapped box with a note on official Lady Grey stationery, addressed to the daughter of GOP presidential nominee Donald Trump. It read: "Dear Ivanka, thank you so much for your web order! We're happy to let you know that the proceeds of your sale have been generously donated to the American Immigration Council, the Everytown for Gun Safety Organization, and the Hillary Clinton campaign. We hope you enjoy your new Lady Grey [Helix Ear Cuff]," and was signed by Jill Martinelli and Sabine Le Guyader, the brand's cofounders. They tagged Ivanka Trump and added the hashtags #thanksbutnothanks, #payitforward, and #hillary2016.

Martinelli and Le Guyader posted the note on Instagram as well. It's a pretty bold move, but the comments the photo has accrued thus far appear to be mostly positive and supportive, with remarks like "Well played, ladies" and a whole lot of "Yesssss."

"While we were flattered to receive an order from Ivanka Trump, our social and political views couldn't be further from those of the [Donald] Trump campaign," Martinelli and Le Guyader told Refinery29. "When we received her order, we instantly felt compelled to take the money and donate it to a few organizations that were more aligned with our ideals...We strongly feel that everyone and anyone can make a difference through actively supporting the causes that they believe in, no matter how big or small."

While she is involved in her father's presidential campaign and spoke at the Republican National Convention in Cleveland earlier this summer, Trump has remained mostly quiet on her personal political stances. She's been tied to the Democratic Party in the past and is a registered Independent, but has become a trusted adviser of her dad's on the campaign trail.

She reportedly pushed back on some of the then presumptive presidential nominee's anti-immigration comments earlier this year, even urging him to recant them back in April, according to New York magazine. She went on to clarify in a deposition later this summer that she only recommended her father clarify the comments, not totally retract them, according to BuzzFeed. Her dad, however, has spoken against immigration, gun control, and his political opponent -- all causes to which Lady Grey will apparently be donating the money from Ivanka's new jewelry purchase.

This is the first time we've really seen a brand take a political stance at the customer-service level (as opposed to releasing a capsule or donating money). But let's be real, anyone can shop whichever brands they please, regardless of political leanings. Ivanka Trump's camp has declined our request for comment. All politics aside, we totally respect Lady Grey for taking the activism route, but we just hope Ivanka Trump enjoys her #helixearcuff. We'll be keeping our eye out for it on her next public appearance -- that is, if she still chooses to sport it following this one-of-a-kind incident.

By: Alyssa Coscarelli and Ana Colon