A new documentary called Soul Boys of the Western World follows the British band Spandau Ballet from its New Romantic beginnings in London in the late 1970s through an appearance at Live Aid in 1985 and a 1999 fight over royalties that landed most of its members in England's high court for a whole month. Blitz Kids, yacht parties, acting gigs, beaches in Ibiza, marriages, divorces, side projects, the promise of a reunion ... it's all in there. So is the music.

Everyone remembers 1983's "True" -- a white-boy nod to Marvin Gaye that hit #1 in 21 countries. That song became an audio meme (remember PM Dawn?), appearing in dozens of film and TV projects from Sixteen Candles to Modern Family. It is but a small taste of the pleasures to be mined from the band's catalog of new wave dance beats and swashbucklingly oozy balladry. Three decades ago, Spandau Ballet's videos on MTV ("Gold," "Only When You leave," "Communication," "Highly Strung," "Round and Round," "To Cut A Long Story Short") rivaled Duran Duran's for exotic locales and sexily styled singers. At the time, nobody thought the sounds of that era would be remembered for their longevity. Yet, the music stuck. And Spandau Ballet's songs are still quite good:

A 2010 UK reunion tour (named after the band's label, a song on its first album and a 2002 hits CD, Reformation) gave way to an appearance at this year's SXSW Festival in Austin, Texas, which was the band's first concert in the US in 28 years. Now, Spandau Ballet is ready to try and conquer America again in 2015.

"The film and the tour make up our new campaign of creativity," songwriter and guitarist Gary Kemp says. Although three new songs -- one of which was performed on Jimmy Kimmel Live this week -- are part of a recent iTunes hits package called The Story, Kemp says the focus is on playing to fans.

The fans can't wait. When Yahoo, Brooklyn Vegan and even David Fricke at Rolling Stone get gushy and excited about the prospects of a Spandau tour, it means that the love for this band is alive and well. And, with a string of eleven North American dates on the horizon this winter, folks across the US will be coming out of the woodwork to get their fix. [Have you been waiting 30 years to see a Spandau Ballet concert? Are you Spandau Ballet deficient? Test your symptoms for SBADS (Spandau Ballet Acquired Deficiency Syndrome). The (fictional) disease is explained in the infographic below.]

Kemp says the quintet is delaying "the commercial thing of doing an album" in order to promote the film and simply reconnect with its audience. After being away from the spotlight for so long, he says the band wondered what it could offer listeners, and the answer was right in front of him.

"What we have is our story," he says. 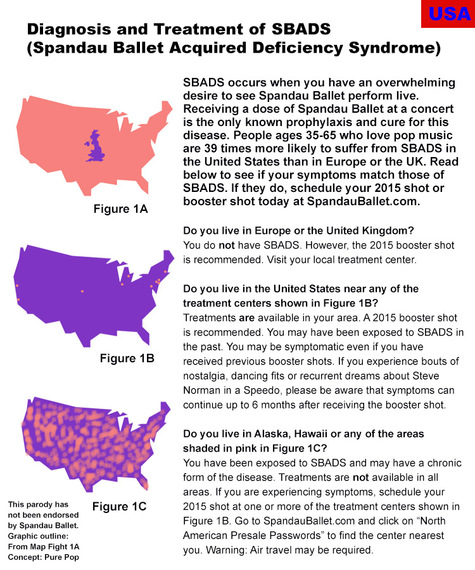