I loved our This is Childhood series this winter. I loved writing "This Is Ten" about my first child, my pioneer, my grace, my Grace.

I haven't been able to stop thinking about what it's like NOW, in the high noon of adulthood.

Thirty-eight is new lines at the sides of my eyes and mouth. From smiling, maybe, but still.

Thirty-eight is realizing that certain shorts and skirts are now just too short. Thirty-eight is wondering if this is the summer to put away the bikinis.

Thirty-eight is thirteen years of marriage. It is knowing all the ways that marriage is both less and more than I thought it was, when I walked into a church wearing white and hearing thunder. Less score-keeping, less candlelight, less drama. More small acts of kindness, more forgiveness, more abiding. Fewer flowers, but more cups of coffee made exactly how I like them, without being asked, brought to me in bed in the morning.

Thirty-eight is realizing that my lifetime passion for peonies probably has something to do with their life span, which is as short as it is spectacular. It can't be an accident that I love best of all the flowers that blaze more brightly and most briefly.

Thirty-eight is not having any more grandparents. It is hearing about the illness and death of my friends' parents. It is going to funerals, and also christenings, more often than weddings. Thirty-eight was leaving my injured mother's side before surgery a couple of years ago to run home to my daughter, who was crying that I wasn't spending enough time with her. Thirty-eight is the middle place.

Thirty-eight is knowing who your friends are, for real, for certain. It is understanding that though there will be a small handful of true native speakers, it is OK for many friends to access only certain parts of you. These friendships, while different, can offer great joy, deep laughter and tremendous companionship. Thirty-eight is still learning that not everybody will like you, no matter what you do.

Thirty-eight is drinking homemade green juice and Diet Coke most days. It is developing a taste for kombucha, and drinking coffee with coconut milk and xylitol. It is drinking wine still, but not as much, because I'd rather sleep and I've realized that alcohol interferes with that.

Thirty-eight is finding that each year she grows more sensitive, more aware of life's beauty and pain, more attuned to the world around her. Thirty- eight cries every single day, and laughs that much too (see: lines on my face).

Thirty-eight is in the heart of the grand love affair that is motherhood, both smitten by and exasperated by her daughter and son. Thirty-eight is watching, awestruck, as these children develop into people in whom bloom traits uncomfortably familiar and absolutely foreign in equal measure. Thirty-eight reads Harry Potter aloud, packs lunches, drives to and from soccer and hockey and baseball practices and games (see photo), plans surprise adventure outings and can still make a bruised knee feel better with a kiss.

Thirty-eight is its own kind of phosphorescence. Different than ten's ephemeral incandescence, but no less dazzling and no less fleeting. Just like 10, just like life itself, 38 is bewilderingly beautiful, maddeningly confusing, achingly bittersweet and vanishingly transient. 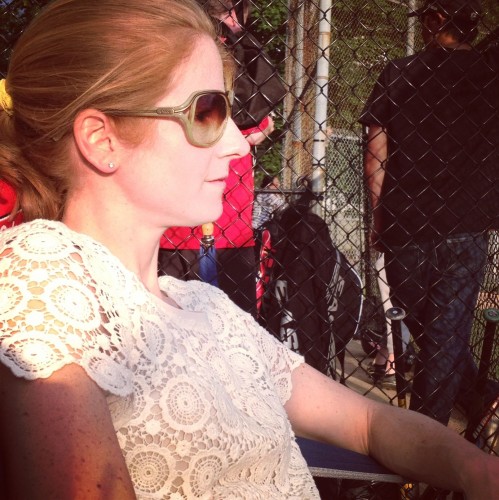