T.H. Culhane rocks the Middle East like no one else I know. I mean he literally rocks the Middle East. A few years ago, on a U.S. State Dept.-sponsored tour, he road-tripped through Egypt and other Middle East countries with Solar Circus, a rock band formed by his brother Michael and his pal, James Dean Conklin, that performed on solar-powered instruments. T.H. and Michael are the youngest-ever graduates of Ringling Bros. Circus Clown School in Florida (they were like 7 and 9 at the time). When Solar Circus performed its finale, T.H. would unicycle back and forth across the stage while playing his guitar.

T.H. rocks with the school kids in Cairo about all the garbage in the streets, and what they ought to be doing about it.

T.H. -- who has a PhD in Urban Planning from UCLA -- and his buddy Mike Rimoin -- who by day manages sustainability for the Seattle transit system -- rock two-week sessions in Cairo helping people living in the slums convert engines to run on biogas and helping them build solar powered hot water heaters on the roofs of their buildings using mostly-recycled materials.

He rocks it back home in Germany, where he lives with his wife, Sybille, and their 18-month-old son, Kilian Arelius Sol Invictus Bashful Baloo Culhane. Mom and Dad bring Kilian along on their amazing adventures -- to Senegal, where they teach villagers how to build homemade biodigesters; to Alaska, where T.H. and a team of his fellow National Geographic 'Emerging Explorers' are running experiments on how to capture and convert methane escaping from the melting permafrost into fuel; to Santa Rosa, California, where he and a group of his former students from L.A.'s Jefferson High School -- where he taught for four years with Teach For America -- built a 100% sustainable model home last year.

And oh yeah, late one night, after we'd eaten cactus and grasshoppers (which didn't suck btw) in a local L.A. restaurant, he taught me how to play the theme song from The Flintstones on the guitar. Which rocks.

His mother, Hind Culhane, the Executive Director of the Global Engagement Center at Mercy College in New York, grew up in Baghdad, and worked there with the Red Cross in the first couple of years after the U.S. invaded that country. What she saw saddened and angered her.

His father, journalist and animation historian John Culhane, was the model for characters in Disney animated films. At an early age, T.H. learned from the greatest Disney Animators who ever lived, the Nine Old Men, how to 'squash and stretch,' and it's a good thing, because he has one foot in Walt Disney's America, where he grew up, and the other foot halfway across the world in the Middle East, where his mother's family lives.

Closing the gulf that separates people at either end of the economic spectrum, bridging the Arab and American cultures, and suturing the wounds we are inflicting on the planet are the problems T.H. and his network are taking on. That's all.

If I ever even begin to waver in the slightest on what my convictions are about what I see in the news about the Middle East, whenever I wonder what is animating those people on the streets of Cairo, I only have to look at it from T.H.'s perspective to know what is good for the people.

It is through this lens, which I have watched get shaped, polished and come into focus for nearly 30 years, that I observe the demonstrations in Egypt. And one thing is crystal clear: 'Ending the game' cannot be the objective.

"Game over?" Now what? Another game will take its place. The question is not whether the people can put an end to a despotic ruler's 30 year game. They can, and it looks like they will. The question in the balance is How will the people change the game?

The people cannot change the game by themselves. They need help. The politicians can't help, they're too busy talking to each other about the money. These are complex problems caused by power accruing for 30 years to a money culture instead of a production culture. This is what happens when we invest in powermongers instead of in communities. (The Chinese are doing community work in Africa while the U.S. pisses away money and human resources propping up Karzai in Afghanistan.) The street genie has escaped its government-issue bottle in Egypt, and nothing Mr. Mubarek and his armies can do or say will force it back in. In fact, no mere mortal is going to be able to do that job. No, this situation calls for a legion of comic book heroes. 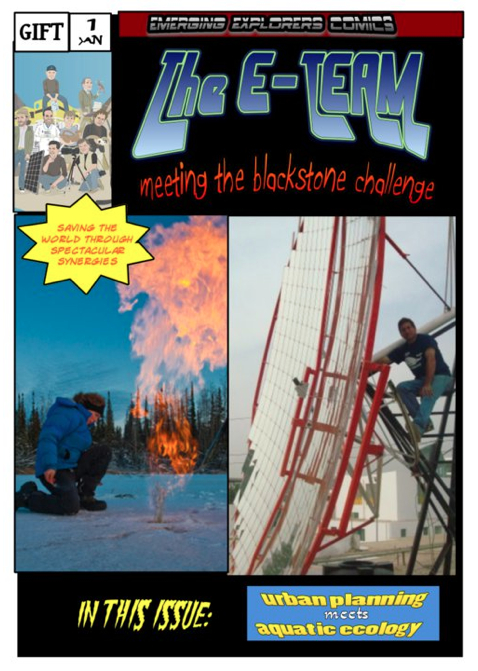 The first issue of the The E-Team -- Emerging Explorers Comics, is on its way. What will it take to change the game in Egypt? Get the E-Team on it! And not just one E-Team. Thousands, and tens of thousands of them. Musicians and inventors and sustainability technologists and engineers and hackers and urban planners and entrepreneurs and hydrologists and animators and filmmakers and guys from Seattle and girls from Germany and children from all over. And clowns. Must have clowns.

As I write this, T.H. is in Palestine with his Solar CITIES project, helping people in the slums there build homemade biodigesters to turn waste into fuel. Sybille and Kilian are back in Germany, where Sybille is monitoring the whereabouts of their friends in Egypt through Facebook posts.

Mike Bonifer is the CEO of GameChangers.