It seems this story has finally come full circle. Annie Moore, the Irish teenager who was the first to alight at Ellis Island, came into my life back in 2002. Working on a PBS documentary, I discovered that the Annie Moore who had been so frequently credited was actually born in Illinois.

I told the appropriate parties and waited, but no one seemed interested in correcting the error, so in 2006, I impulsively blogged a contest offering $1,000 for the first proof of the real Annie. In just six weeks, a virtual gang of genealogists solved the mystery and found Annie. The resulting family reunion was featured on the front page of the New York Times.

Last month, I wrote about Annie again - this time about a photo that was discovered (by Michael Shulman) that appeared to be Annie with her brothers on the day of their arrival at Ellis Island. At that time, I was asking for help proving it was them. 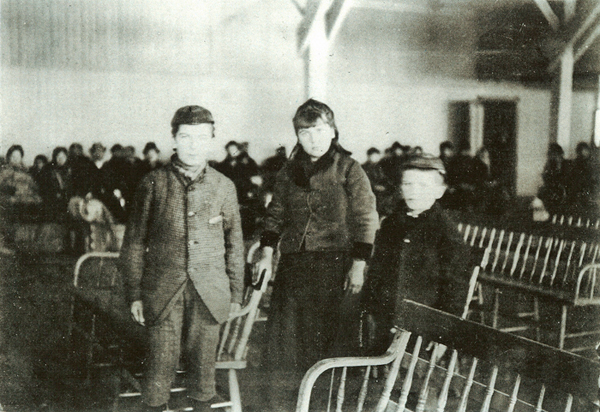 Since that time, I've received additional assistance and have done more digging, and as a result, have reached the conclusion that this photo is indeed Annie with her brothers, Anthony and Philip, at Ellis Island. In fact, I'm so sure that I'm putting my money where my mouth is and offering $1,000 to anyone who can prove me wrong. If anyone can provide convincing evidence to the contrary, please share it with me. But since I'm doubtful that any such evidence will be forthcoming, I'm pleased to take this opportunity to introduce everyone to this iconic image Annie Moore at Ellis Island.

Here's a summary of my reasoning:

The only remaining piece of conflicting evidence is the denial by Ellis Island that this photo is of Annie and her brothers. The counterclaim is that this photo is of a random group of immigrants at the Barge Office. But as this illustration from an 1891 issue of Harper's Weekly shows, the Barge Office looked nothing like the room in which Annie and her brothers are standing.

It's also unfortunately relevant to point out that Ellis Island has been mistaken before. While I have great respect for the facility and its associated institutions, I was assured that they had the correct Annie when I first informed them that they were dealing with an accidental impostor back in 2003. Extensive research unearthed the true Annie on that occasion, and research now indicates that Ellis Island is mistaken in its claim about this photo.

That's why I'm putting $1,000 at stake again. The last time, it restored Annie to her rightful place in history, and this time, I want to do this same with this photo - because it matters. Ellis Island is synonymous with immigration, and as the first to arrive, Annie symbolizes the fabled American dream that so many came here to pursue. As an Irish girl, she also represents the Irish diaspora which is so intertwined with the story of Ireland itself. On the surface, she may seem to be a random teenager who accidentally stepped into history, but when she did, she became an important symbol for two nations. This image captures that moment and belongs to all of us.

[Many thanks to Michael Shulman, Maureen Peterson, Maureen Taylor, Marian Smith and Tim McCoy who have contributed so substantially to this research.]