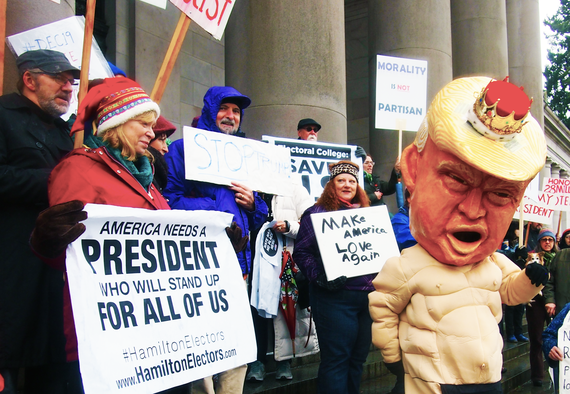 Donald Trump never tires of calling the millions of Americans who oppose his policies sore losers and paid protesters. He and his minions tell us that they won the election fair and square, and that the rest of us should 'just get over it'. In his mind, it's personal. The way The Donald sees it, like everything that happens in the world, it's all about him.

But what Trump and his minions aren't able to grasp is that the unprecedented upwelling of opposition is not about a lost election. It's not about a flawed voting process that has put the second-place finisher in the White House. For the most part, it's not even about partisan politics. The anger that's manifesting itself in a wave of unprecedented citizen action is about the undermining of basic American values.

Perhaps the most egregious example among many is the Muslim ban. Discriminating against people on the basis of religion rubs most Americans the wrong way. After all, equal treatment under the law is the most fundamental of our founding principles. It says so right in the Declaration of Independence. "We hold these truths to be self-evident, that all men are created equal, that they are endowed by their Creator with certain unalienable Rights, that among these are Life, Liberty and the Pursuit of Happiness."

Take that away and what have you got?

Darby Roach is a writer and world traveler. His latest book, Over The Hill And Around The World is an Amazon best seller.