This post is the sixth in the series "This Is Childhood," which captures moments in our children's lives, from age 1 to 10.

You and I have met on several occasions. Twice you've blazed through my house.

Upon your arrival, you've brought beaming faces to your 6-year-old owners, proud to hold up not one, but two hands as proof of their new status.

You've brought the words to the national anthem, sung in the most innocent and pure of voices, with hands over 6-year-old hearts turned to face our flag.

You've also brought the words to the most recent One Direction and Taylor Swift hits, sung with equal fervor and punctuated with gyrating, still uncoordinated, 6-year-old hips.

You've brought snapping and whistling to accompany those hips.

You've brought the Tooth Fairy. To deliver treasures in exchange for those two front teeth... that exquisitely delicious gap that captures that finite moment... too brief... in time before the adult teeth emerge and threaten to take over that precious little 6-year-old face.

You've brought the removal of training wheels... the thrill of afternoons spent trying, trying, trying and finally succeeding to ride, unassisted, beside an older brother who's already conquered the challenge.

You've brought a mastery of puzzles. Your wiry body paces eagerly awaiting Daddy's arrival home from work to show off the 100-piece puzzle you've completed, tongue protruding from lips in concentration, all by yourself.

You've brought a love of art, as evidenced by the hands covered in purple marker and the school jerseys that return home spotted with Elmer's glue.

You've brought piggy back rides up the stairs to bed because your body has grown too long to be carried.

Which leads me to potty humor... Six, you devil, you brought that too. You brought a belly laugh like no other at the mere mention of the word "butt." Always at the dinner table. And typically with grandparents present.

Age 6, you now help write the grocery list. Your attempts to spell words phonetically leave me grinning at the store, when it finally occurs to me that "aa bat trees" are in fact AA batteries.

Six-years-old, there is not a mean bone in your growing body. Yours is a world far more fair than my world was when, long ago, you were my companion.

You look at your playground buddy, who has two moms, and your eyes see only the love of a family.

You peruse the names on the cubbies outside of your classroom, and you don't see different ethnicities. You see -- and now know how to spell -- the names of your friends, all so different, yet mostly alike.

You know nothing of prejudice and bigotry.

You navigate this world with a fair and open mind, and your heart is that much fuller for it.

As many leaps forward as you take, 6, you're still so preciously innocent.

Afraid to lie, you prefer to "kid."

You're a staunch believer -- in Santa Claus, the Easter Bunny, the Tooth Fairy, Captain America, and that Mommy's kisses take the sting out of boo boos.

You scare easily. I'm still able to keep you close with a warning: "Remember what happened to Nemo when he swam ahead of his Dad?"

Your innocence remains intact. You're enveloped in a bubble that protects you, for a short time longer, from equating fear, despair and heartbreak with the names Jerry Sandusky, Aurora, Colo., and Sandy Hook.

But this last year, with my third son, I've loved you the most.

His was a heart that hadn't yet closed on the day he was born. It mended itself before we left the hospital.

But I should have known then that this boy would accomplish things in his own time.

His mind works furiously to find the right words, for his is a story that takes longer to tell.

He hides it as best he can at school but, when he sees me, his is a thumb that still needs sucking.

He walks confidently alongside me, yet his is a hand that still seeks holding.

But, 6, you came to this boy... this boy whose hand still seeks holding, whose thumb still needs sucking, whose story takes longer to tell, whose heart had not yet closed upon birth -- and, 6, you showered him with your magic.

For this was the year that he learned to skip. A skill so easy for his peers to master, but painstakingly difficult for him.

This was the year he gripped his pencil with precision, drew a skeleton, and smiled proudly when his older brother recognized it and complimented him.

This was the year that he ran with confidence, his eyes no longer on his feet, but peeking over his shoulder to see if his little brother raced to keep up.

This was the year he jumped off the diving board with reckless abandon, screaming "Unacceptable!" as he leapt, while wearing a fedora atop his head.

And, yes, that fedora stayed put.

While I waited in shadow, listening from the next room, willing them to leave him be, he mustered the courage -- with 6 on his side -- to stand up to his brothers.

It was the year he found his voice.

The very same year he was invited for playdates.

The year his friends screamed his name from the playground, beckoning for him to join in their games.

And, 6, you've filled this mother with hope.

And with that hope came the luxury of drifting off to sleep without worry. For the first time in a very long time.

And for that I will always love you.

So much so that I even forgive you for bringing Gangnam Style.

Eighteen short months from now, you'll slip into the house while we sleep to spend your fourth and final year with us.

And I'll be here to welcome you back with open arms.

I'll even bake your favorite chocolate cake for the occasion.

Until then, old friend... 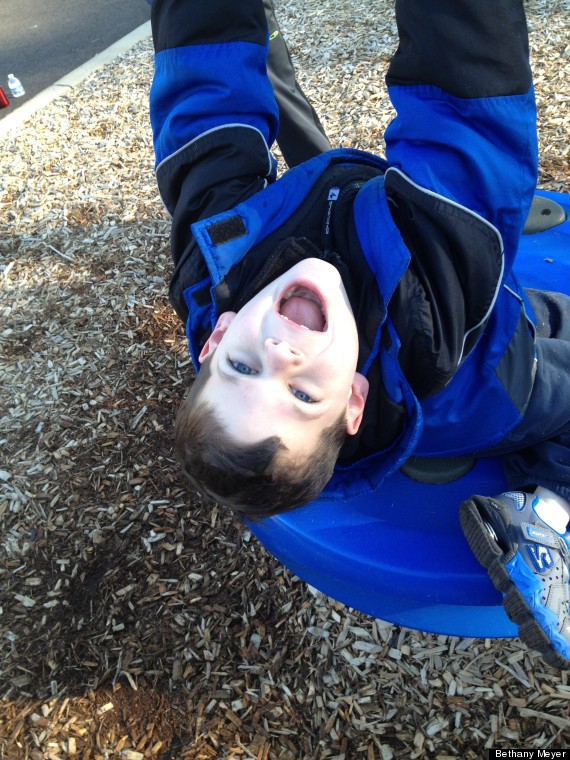 More "This is Childhood" Posts

Blogger, I Love Them the Most When They're Sleeping