Coverage of crises can burnish reputations, as the networks attract worried viewers who sample news and stock-picking shows for the first time -- or at least for the first time in a long while.
--Brian Stelter, The New York Times.

ANNOUNCER: This is CNFMNSTV, the most reliable source for up-to-the-minute financial news from Wall Street and around the world, with far more letters than any other cable financial network, and hosted by our crackshot team of economists, gurus, and wizards -- literally. Reporting live with your mid-day market report are anchors Stewart Brownberg and Andrea Chavez, Wall Street analyst Vince Robertson, and Udurtar-gul-ana, our CNFMNSTV Babylonian bārû-priest.

BROWNBERG: Welcome to Lightning Brunch, where we give you behind-the-scenes coverage and in-depth analysis of today's financial headlines, mostly through the art of restating the obvious.

BROWNBERG: All the while striving to ignore any nuance to the naturally reactive cycles of free-market economies, but always bearing in mind our ethical responsibility not to further exacerbate or in any way worsen the current financial predicament, especially through the shallow pursuit of hype or ratings, by willfully cultivating any sense of PANIIIIIIIIIIIIIC!!!!!!!!!!

ROBERTSON: Thank you, Andrea. The market was volatile for most of the morning, volatiley fluctuating with a volatility that was quite volatile in a volatile sort of way, with volatile periods of heightened volatility, which, though volatile at times, proved volatile. This market volatility -- in noun, verb, and adjective form -- will continue just so long as we keep talking.

UDURTAR-GUL-ANA: Thank you, Stewart. Extispicy, as some of you well know, is the ancient Mesopotamian art of divining the future by examining the organs of ritually sacrificed animals. To determine whether we'll be entering into a bear market or a bull market, we took a bear, and we took a bull, and we dressed them in garlands of wheat and barley, perfuming their brows with myrrh and balsam, before hacking them open with a ceremonial dagger, allowing us to survey their bloodied entrails, thus giving us an accurate survey of the financial terrain ahead.

UDURTAR-GUL-ANA: We conducted a side-by-side analysis of the bear/bull innards, and our team is happy to report that the bull's lower intestine had a small deviation near the third rung, whereas the liver of the bear was good and true. Thus, the harvests will proceed in bounty and plenty, which certainly is good news for agricultural commodity futures.

CHAVEZ: It certainly is good news. Thank you, Udurtar-gul-ana.

BROWNBERG: Turning our attention for a moment to the tech sector, a light chop is forecast, with cool breezes out of the Northeast, so don't forget to bring your sweater!

CHAVEZ: Altostratus clouds will be gathering in the early evening, obstructing any nighttime views of Jupiter and Neptune, meaning that our CNFMNSTV Astrologers won't be able to get an accurate read on Pharmaceuticals.

BROWNBERG: Later in the evening, these mid-layer clouds will give way to Cumulonimbus clouds, some of them ominously shaped like a goat eating a squirrel, manifesting itself in a shaky outlook for high-yield corporate debt. Expect these clouds to bring with them some heavy showers and thunderstorms. Udurtar-gul-ana, what's your take?

UDURTAR-GUL-ANA: These storms obviously signal the displeasure of the cosmological triad Marduk, Anu, and Ea, so you may want to increase your portfolio's exposure into energy derivatives.

CHAVEZ: Thank you, Udurtar-gul-ana. Gold prices rose again, reflecting the international mood of uncertainty, and a sudden demand for building idols to Drishliltu, a wealth-bearing deity our Babylonian analysts have just invented and to whom you should now be praying.

BROWNBERG: Switching now to the trading floor, the market appears to be up in high volume trading, underscoring the resiliency of the American economy despite the S&P's downgrade of US debt earlier in the week, and the heartening news that the European Central Bank will help stabilize interest rates on Spanish and Italian debt.

CHAVEZ: Oops, hate to interrupt you, Stew, but it looks like the market's down again.

BROWNBERG: Obviously a ripple effect related to the ongoing situation in the Eritrean hinterlands, namely, where is Eritrea, what's a "hinterland", and how does the situation there affect the situation here.

BROWNBERG: A clear show of consumer confidence in signs that the upswing in cassava exports from the Comoros Islands reflects a broader economic recovery.

CHAVEZ: Annnnd the market's down again. Yup. It's down.

CHAVEZ: Let's give it 30 seconds before analyzing anything.

BROWNBERG: This excruciating 30-second-long period of what could possibly be a downturn, or a downturn about to become an upturn, undoubtedly highlights the growing concern among traders about the housing and job markets, and rumors coming from Capitol Hill that a good portion of our country may or may not be seceding to France.

CHAVEZ: Could we get a graphic on what our new flag will look like? 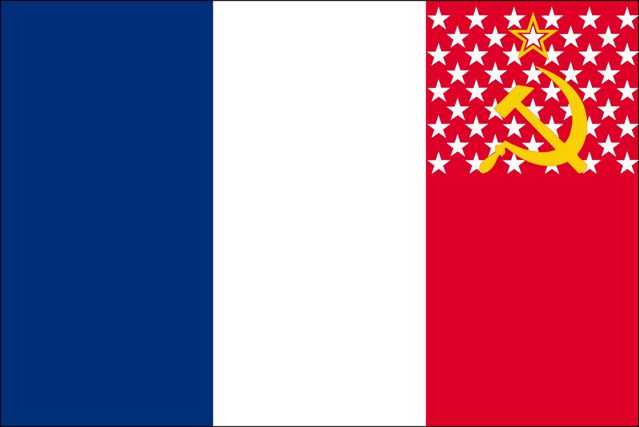 BROWNBERG: Please keep the image of this flag in your head while we start to use the phrase "Double-Dip Recession."

CHAVEZ: We would like you to keep on imagining the phrase "Double-Dip Recession," letting it ring through your mind in all of its terribleness, as we begin to use really spiffy-sounding technical-terms such as "contango" and "backwardation," oftentimes employing them in ways that cancel each other out.

BROWNBERG: And now, we will use several more readily-identifiable words, in no particular order and as they come to us.

BROWNBERG: Whatever you do, do not panic.

This has been your CNFMNSTV Lightning Brunch mid-day market report, with Stewart Brownberg, Andrea Chavez, Vince Robertson, and Udurtar-gul-ana.