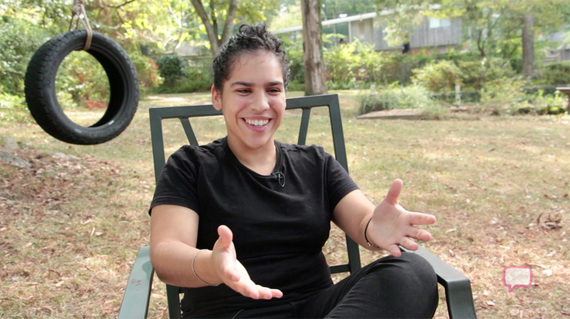 Alexa Espinal is 23 years old and had been teaching for only two weeks. But that's all the time needed for Alexa to experience homophobic words from her middle school students. Alexa recalls:

Being young and inexperienced as a teacher was one challenge, but the other was the possibility of revealing herself as a lesbian. In Mississippi, it's possible to be fired simply for being LGBTQ. Fortunately, Alexa controlled the situation with poise:

And this one kid kind of straightened up, looks forward and he's like, "Okay, I'm not going to do it."

Knowing that middle school students don't care much about what adults say, Alexa hoped her words would make an impact on the students so peer-to-peer communication might happen. It wasn't long before Alexa got to witness the change she created:

Time passes on and I still hear it every now and again. And the first time I saw maybe like a small light was, this one kid decided to say it in my classroom, the word comes up again and these two boys start saying, "You're gay, you're gay" and all I did was give a look and this one student says, "We're not using that type of language."

And I was like, yeah, that's amazing, and I'm planting a seed and something's happening, there's going to be change, it's just going to take some time.