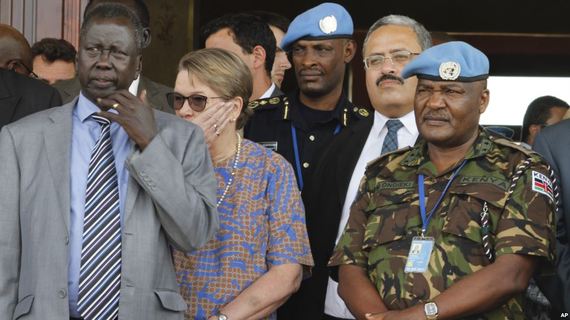 The dismissal of Lt-Gen Johnson Mogoa Kimani Ondieki as commander of the UN Mission in South Sudan (UNMISS) comes off as a knee-jerk reaction that fails to address structural limitations of the UN peacekeeping operations.

Even more worrying for Kenya is that the action practically eviscerates the country's unrivaled contribution to peace and stability in Sudan.

The reason given for the action was that the commander had failed to protect civilians during the violence in Juba last July. He arrived in Juba on 10 June 2016 and officially took over on 17 June 2016. The violence in Juba took place from 08 July to 12 July 2016. The tragic attack on the Terrain Hotel happened on 11 July 2016. The ex parte decision was arrived at against an individual who had arrived at the workplace just three weeks earlier, raising reasonable doubts about his culpability. This was clearly a scapegoating verdict rather than an honest intent to troubleshoot.

Kenya has taken part in peace keeping operations in more than 40 countries, sending out over 30,000 soldiers in the process. However, its military involvement was not the first contribution to peace in Sudan.

Kenya provided a huge logistics and operations hub for Operation Lifeline Sudan (OLS), way back in 1989, following a devastating famine and the civil war between the then Government of Sudan and the Sudan People's Liberation Movement Army. Kenya supported the first humanitarian programme that sought to assist internally displaced and war-affected civilians during an ongoing conflict which helped save millions of lives. It was by far the largest humanitarian assistance programme.

Kenya also took the lead in the Comprehensive Peace Agreement (CPA) signed in January 2005, by the Sudan People's Liberation Movement and the Government to end the civil war. It also set a timetable for a Southern Sudanese independence referendum. A top Kenyan soldier, General Lazaro Sumbeiywo, led in mediating the negotiations.

The two processes were quite long-drawn and laden with disappointments as would be expected of any belligerent setting, and Kenya bore the brunt squarely. This is why the latest decision to, as it were, blame the country's military leadership on peacekeeping's structural weakness did not go down well in Nairobi.

The government of Kenya has already protested the lack of formal consultation prior to the dismissal of Lt-Gen Ondieki, terming it a demonstration of disregard of Kenya's key role in South Sudan.

What's more, one discerns a whiff of jury inconsistency; in August last year following allegations of multiple sex abuse allegations against peacekeeping troops in Central African Republic, it was the UN peacekeeping envoy Babacar Gaye who was fired. Inexplicably, in South Sudan case the axe fell on the newly-arrived military commander.

Kenya's ire is quite expected, given that the international community was already getting exasperated with the situation in South Sudan. Just a few months before the incident in Juba, the United Nations Security Council had authorised an increase in troops and the use of lethal force to protect civilians.

At the time, we in the region were acutely aware that something was amiss and the ability of UNMISS to operate was so crippled that it required urgent attention if its mandate was to be achieved. That was also precisely why most of South Sudan's neighbours offered to contribute to the protection force and started working on making it operational.

It was also critical that the peace process in South Sudan be continuously encouraged along and any challenges that arise be quickly addressed, if justice was to become the cornerstone of the governance architecture in South Sudan. It had become abundantly apparent to many of us that in fact the situation in South Sudan required more sustained political negotiation and support than military presence.

A report by the UN Office of Internal Oversight Services released recently acknowledged that operational and political constraints within missions were at odds with their legal authority and mandate to act and that some missions felt outnumbered and stretched "making the use of force only a paper option".

As was the case in many conflict areas, military action without commensurate effort in political negotiations sets any mission up for only limited impact. Tough questions must then be asked not only regarding the success rate of UN peacekeeping missions, but also how to deal with the center when it is reluctant or too slow to respond to the needs of the field. Perhaps we have not learnt from Srebrenica, Rwanda, the Democratic Republic of Congo.

The Security Council should much more actively support regional efforts by ensuring that the forces on the ground have the enablers and multipliers needed to ensure successful missions. History shows that missions with adequate resources and attention are more often than not successful.

Unless the international community goes back to the drawing board, well-intentioned efforts by countries who contribute troops such as Kenya will appear unappreciated, and the civilians in South Sudan will continue to shed blood needlessly. Member states will not want to participate in missions set for failure ab initio and where the speed to condemn is disproportionate to the urgency in supporting the mission.

Firing one of our generals for the systemic weaknesses of UN peacekeeping and without prior consultation is not only disrespectful, but dishonors Kenya's contribution to peace in South Sudan.

Ambassador Amina Mohamed is Cabinet Secretary in the Ministry of Foreign Affairs, Kenya.

A previous version of this post incorrectly stated that Lt-Gen Johnson Mogoa Kimani Ondieki arrived in Juba on 10 January 2016. He arrived on 10 June 2016.