2014 has been called the "year of mindful living," and talk of a mindful revolution seems to be everywhere from Davos to Silicon Valley. Most recently, mindfulness was the subject of a controversial cover of TIME Magazine.

TIME's "Mindful Revolution" cover in January stirred up debate among the online mindfulness community, in part for featuring a beautiful, white blonde woman meditating on the cover. As some commentators pointed out, this wasn't the first time that the magazine has portrayed mindfulness this way: Its last cover on the "science of meditation" also featured an image of a beautiful white model.

"It's one thing to feature a young, fertile white girl on the cover of TIME and promote it as 'mindfulness,'" wrote Joanna Piacenza, web manager of Tricycle: The Buddhist Review, in a HuffPost Religion blog post. "It's another to do it twice over the course of a decade."

It's undeniable that there is a mindful revolution going on, and that more people than ever before are embracing the well-documented physical and mental health benefits of meditation. But unfortunately, a homogenous representation of mindfulness practices isn't uncommon in the media -- especially in the case of yoga, which is often depicted by a thin white woman with a "Gwyneth Paltrow body." But the image of the serene, young white woman closing her eyes and breathing deeply doesn't come close to telling the whole story of how mindfulness is beginning to transform lives.

Despite the often-exclusionary media representation of mindfulness, the "mindful revolution" is spreading everywhere.

"Everyone benefits from meditation," Russell Simmons, who is on the board of the David Lynch Foundation, a non-profit organization that aims to bring Transcendental Meditation to in-need populations, told CNN. "This idea of letting your mind settle is in every religion, but is also in every spiritual teaching. But also everyone needs to look inside for reflection in order to work outside. Operating from a calm space has gotten to be the greatest gift that anyone can be given... all happiness comes from inside."

Here's proof that mindfulness is for everyone, and that it's transforming both individuals and communities across lines of gender, race, socioeconomic status and cultural background. 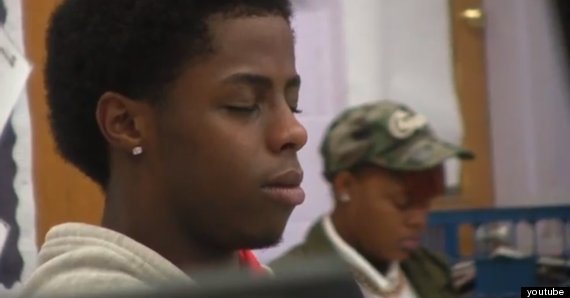 Meditation has been proven to have a number of benefits for students: It can boost focus, attention and memory, lower stress levels and improve sleep quality, and some studies have even found mindfulness training to improve test scores. An increasing number of schools, both private and public, from elementary to high school, are beginning to integrate mindfulness into their curriculums.

At Patterson High School in Baltimore -- a school with a number of at-risk students and has a four-year graduation rate of only 86 percent -- the Holistic Life Foundation's "Mindful Moments" program is working yoga, meditation and breathing into the students' daily schedules. As part of the program, faculty and students take part in a 15-minute yoga and mindfulness practice at the beginning and end of each day.

"It's our hope that by bringing Mindful Moments to our school, students will improve their self-esteem and self-awareness, and develop a better way of making decisions," said Patterson principal Vance Benton.

Veterans and soldiers using meditation to cope with PTSD. 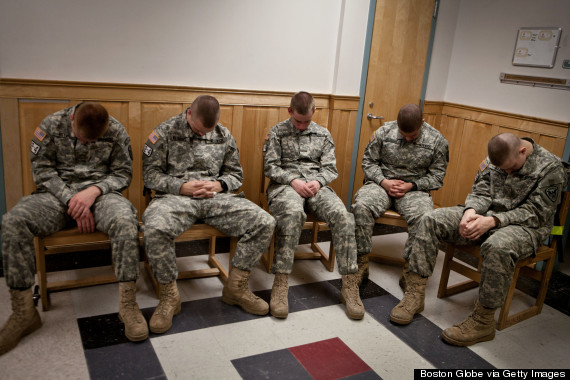 Meditation is becoming increasingly common among a population that's at high risk for stress and stress-related health problems: Soldiers and veterans. Through Operation Warrior Wellness program, the David Lynch Foundation is bringing Transcendental Meditation to over 10,000 veterans with PTSD and their families. The program is helping to promote resiliency and well-being among soldiers, empower the families of veterans, and relieve symptoms of PTSD, which as many as one in eight returning soldiers may suffer from.

"The research... found about a 50 percent reduction in symptoms of depression and post-traumatic stress disorder. The research shows a reduction in heart disease, which is a byproduct of PTSD, as well as anxiety and sleep disorders," Bob Roth, executive director of the David Lynch Foundation, told CNN on Veteran's Day in 2012. "It's medically sound and scientifically-tested." 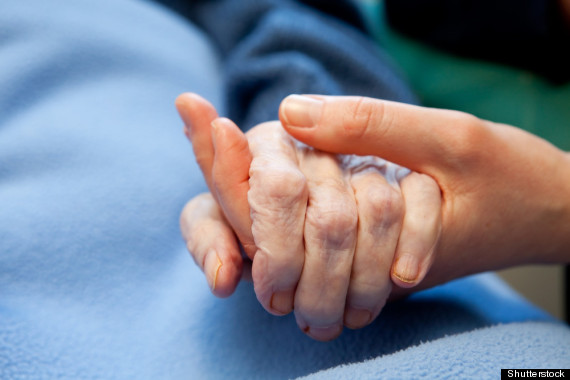 More generally, mindfulness can help all of us to better cope with aging and death. Two Zen Buddhist monks, Koshin Paley Ellison and Robert Chodo Campbell, are starting a movement to transform end-of-life care through mindfulness and other Buddhist principles. They founded the New York Zen Center For Contemplative Care to help both the terminal ill and their families and friends come to a more peaceful acceptance of death.

Our culture has a tendency to fear and push away death, says Ellison. Oftentimes when a person is dying, the people around them become so uncomfortable with what's happening that they try to avoid facing the reality. But the more accepting and intimate we become with death -- an attitude that mindfulness can help us to cultivate -- the more we're able to accept it.

"We need to move into the fear," Ellison told the Huffington Post. "We need to say, 'I can be here, I'm scared out of my mind, but I can breathe and be with it.'"

Mindfulness has become part of a revolution in mental health care. 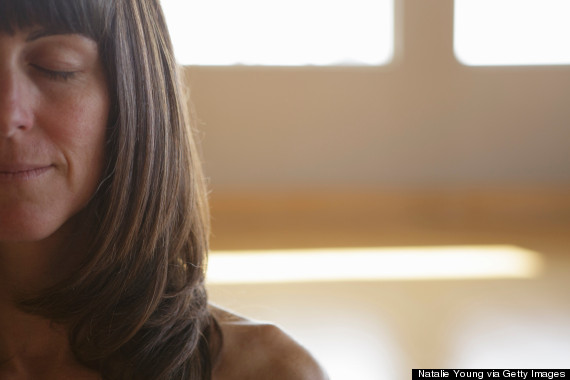 The potential for mindfulness practices to revolutionize mental health and psychiatric care is enormous, and it's already well underway. With his Mindfulness-Based Stress Reduction program, meditation expert and MIT medical professor Jon Kabat-Zinn helped to bring mindfulness into the world of psychiatry. So far, the research has proven meditation to be an effective, low-cost, side effect-free intervention that can reduce anxiety and depression, as well as lowering stress levels and boosting emotional well-being. Mindfulness has even been used in addiction treatment and has been shown to help smokers kick the habit.

“Get out of our heads and learn to experience the world directly, experientially, without the relentless commentary of our thoughts," Mark G. Williams, John D. Teasdale, Zindel V. Segal and Kabat-Zinn wrote in The Mindful Way Through Depression: Freeing Yourself From Chronic Unhappiness. "We might just open ourselves up to the limitless possibilities for happiness that life has to offer us.”

Mindfulness is slowly beginning to transform the medical profession. 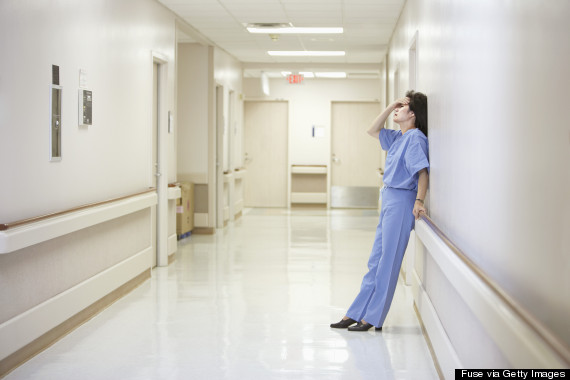 Burnout may affect up to 60 percent of doctors, according to Association of American Medical Colleges estimates. But recent studies have found that mindfulness prevents burnout and boosts compassion among physicians, which may improve the doctor-patient relationship. And some hospitals have actually started bringing mindfulness into their facilities.

At the Cleveland Clinic in Ohio, a new emergency alert, "Code Lavender," has been introduced to address cases of emotional or spiritual stress and burnout. The Code Lavender program aims to support nurses and physicians during emotionally troubling or exhausting times, often after experiencing the death of a patient. The Healing Services Team utilizes holistic methods including spiritual support, counseling and therapeutic massage, while the Clinic also offers yoga classes and mindfulness training for its staff in an effort to promote "compassion-based care."

"[Compassion-based care] does go against an old style of medicine where it was just, 'Go go go, stay tough, don't be impacted by it, keep moving,'" Amy Greene, director of spiritual care at Cleveland Clinic, told the Huffington Post. "We're seeing that this is long-term not sustainable. Doctors and nurses are human beings."

Athletes -- from at-risk youth to NBA stars -- are improving their game through meditation.

The Mind + Sport Institute (MSI), a San Francisco-based organization dedicated to helping athletes (including at-risk youth) reach their highest potential, wrote that the TIME Magazine mindfulness cover "said one thing to the male athlete (possibly of color) that we work with in the Bay Area: Mindfulness is not for you."

MSI is right that the TIME cover doesn't reflect the diverse range of athletes, of both genders and from a variety of ethnic and cultural backgrounds, who practice mindfulness. Kobe Bryant, LeBron James and Michael Jordan are just a few of the many professional athletes who say that they turn to meditation to reduce stress and improve their game.