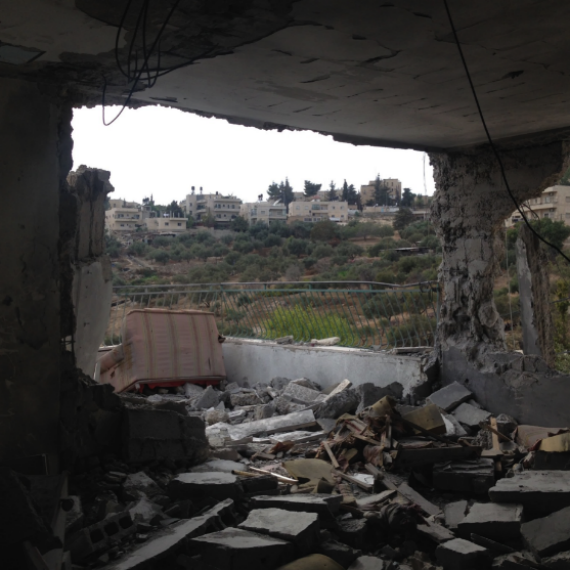 At the southern edge of Jabal Mukaber, a Palestinian neighbourhood in occupied East Jerusalem, the hills form a wide, natural amphitheatre. Here olive groves adorn the gentle slopes, horses whinny, and birds flit out from the eaves to play in the evening sky. The views out towards Herod's great fortress Herodion are breathtaking. The air where I was sitting, however, was thick with concrete dust, driven up by the feet of two small children chasing one another between piles of rubble and shattered furniture. It was here, in an idyllic setting 200 metres away from the manicured grounds of an illegal Israeli settlement, that I discovered what being "tough on terror" looks like.

From the road there is no indication of what you are about to see: it is only after you pass along the side of another house and turn into a staircase that your feet are suddenly confronted with unexpected obstacles. Thick chunks of bashed up breezeblock pile up on the edge of the path and grey dust covers the ground. At the top of the stairs: devastation. Buckled columns have cast off the walls they once supported, and the front half of the house tilts forward, looking as if it is pondering a complete collapse. 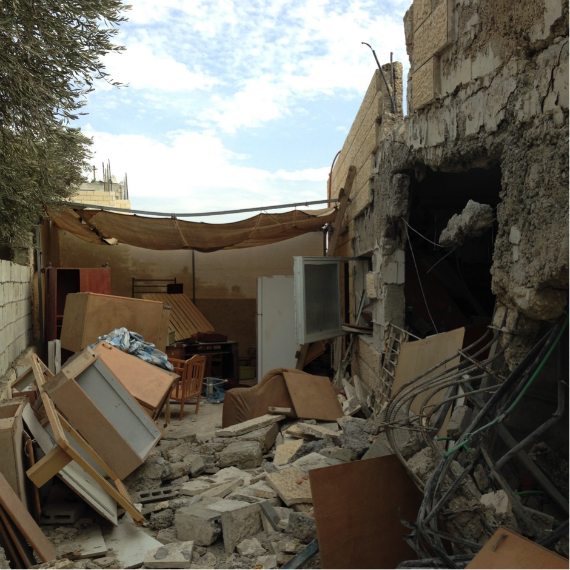 This used to be where Ghassan Abu Jamal lived with his wife and three children. Along with his cousin 'Uday, Ghassan carried out the 18 November 2014 attack on the Har Nof synagogue in Jerusalem, killing five Israeli civilians and an Israeli border police officer before both were shot dead. It was an attack that we at Amnesty International condemned as "abhorrent." With the attackers dead, and beyond further punishment, the Israeli authorities have instead enacted a series of measures that punish their families. No matter how abhorrent the actions of 'Uday and Ghassan, the treatment that I saw that had been meted out to their families was absolutely unjustified.

"On the day of the attack the police raided the house, arrested many of the family members, and took me to the Russian Compound," Mo'awiyeh Abu Jamal, Ghassan's brother, told me. "They held me there for six days, and interrogated me for many hours. During the interrogation both my arms and legs were shackled, and when they were not interrogating me they made me sit on a very small chair, which caused me a lot of pain." This stress position, known as shabeh, is a form of torture: he also described having a bag placed over his head and tied tightly round his neck, and being deprived of sleep for long hours. Amnesty International has documented how Israeli interrogators have tortured and otherwise ill-treated Palestinian detainees for many years with impunity. Mo'awiyeh was released without any charges being brought against him, as were all the other family members arrested that day, which indicates that the Israeli authorities do not have evidence to suggest that any of them were involved in the attacks.

In the early hours of October 6 this year, Israeli police arrived to carry out the demolition order. "They arrived at midnight and for two hours we could hear them breaking all the furniture in the house. Then we heard sounds of drilling, before a big explosion at 5.30 [am]." Despite the Israeli Supreme Court instructing the police to avoid damaging any other apartments in the building during the demolition, Mo'awiyeh's apartment -- adjacent to Ghassan's -- was completely destroyed, and neighbouring houses were damaged. Downstairs, cracks run across the ceiling and down the walls of a cramped bedroom where Mo'awiyeh, his wife and four children now sleep. Catching my breath at the door, I could see a new apartment tower rising in the settlement just up the hill. But down here, the family have not even been allowed to remove the rubble. "My son can't understand what happened," Mo'awiyeh tells me. "He just keeps asking me who did this, and why." 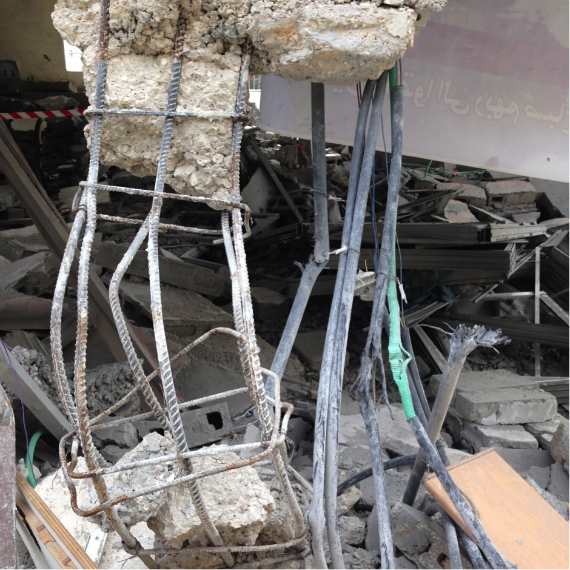 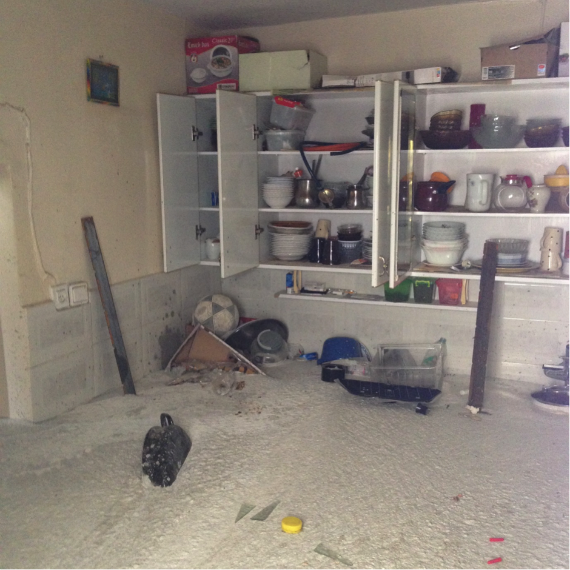 In addition to the destruction of one house, the Israeli authorities ordered that the rooms where 'Uday lived in his grandfather's house be "sealed." The word "seal" gives the impression of something neat, precise and hygienic, but as I saw this process is anything but. To "seal" a room, the Israeli authorities break a window, insert a hose from a cement mixer, and pump cement into the house. The result looks like a strange cross between a natural disaster and a contemporary art installation, with cement, now dry, two-thirds of the way up the walls, the detritus of everyday life poking out of the surface. At the house of Mutaz Hijazi, a Palestinian killed after he attempted to assassinate a right-wing Israeli activist, architects have told the family that the 90 tons of concrete pumped into his bedroom will slowly drag the house off its foundations and down the steep slope on which it is perched, destroying it completely. 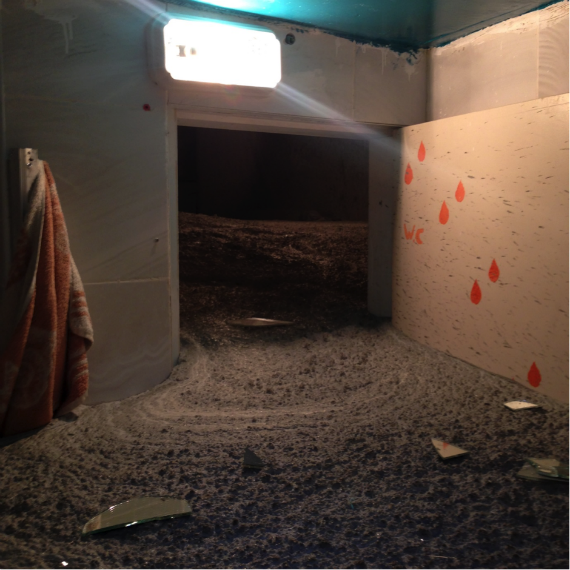 The Israeli Supreme Court has stated that these demolitions are not aimed at punishing the families of attackers, but are meant to be deterrents: warnings to others considering carrying out attacks on Israelis that their families will pay a price. Such a justification cannot disguise the fact that such demolitions and "sealings" of homes are the very essence of collective punishment: punishing people for the actions of others.

In addition to all those made homeless by the demolition I saw, the Israeli authorities have revoked the residency status of Ghassan's wife and three children, a move that has deprived them of access to healthcare. Such actions, regardless of whether they are being carried out in response to a heinous attack, amount to collective punishment, and are illegal under international law.

Every government has a duty to protect people under its rule from attack, but these measures must respect human rights and international humanitarian law.

Like targeting civilians, collective punishment is absolutely prohibited and can never be justified. When such punishment takes the form of extensive destruction of homes, it is a grave breach of the Geneva Conventions and a war crime. The Israeli authorities must immediately stop punishing those who are not responsible for the attacks: the perverse logic of this type of being "tough on terror" ends up inflicting suffering on the entire Palestinian population.