On Thursday night, around 5:20 p.m. ET, reports began surfacing of massive Internet disruptions in Egypt. It is now believed that the Egyptian government ordered Internet service providers (ISPs) to sever international connections, at least temporarily. This action by the government reportedly occurred shortly before some of the largest protests against President Hosni Mubarak were scheduled to take place.

Critical European-Asian fiber-optic routes through Egypt appear to be unaffected for now. But every Egyptian provider, every business, bank, Internet cafe, website, school, embassy, and government office that relied on the big four Egyptian ISPs for their Internet connectivity is now cut off from the rest of the world. Link Egypt, Vodafone/Raya, Telecom Egypt, Etisalat Misr, and all their customers and partners are, for the moment, off the air. [...] Virtually all of Egypt's Internet addresses are now unreachable, worldwide.

The Telegraph calls this action "unprecedented in the history of the Internet." The Telegraph went on to write that news and social media websites like Facebook and Twitter have typically been targeted by the likes of China, Iran, Thailand and Tunisia during times of civil strife. "The ongoing attempt by the Egyptian government to shut down all online communication is, however, a new phenomenon," The Telegraph concludes. "It not only prevents ordinary Egyptian internet users from accessing any websites, it cripples Tor, an anti-censorship tool that technical experts and activists were using to circumvent the Facebook and Twitter blocks."

A tweet, posted by tech journalist and civil liberties activist Danny O'Brien (@danny_at_cpj), links to a graph that visualizes the sudden halt of Egypt's Internet traffic on the evening of January 27. "This is what Egypt's cutoff from the Net looks like," O'Brien tweeted when he posted the graph. According to a tweet by Craig Labovitz (@labovit), chief scientist for Arbor Networks, the graph is "based on data from 80 carriers around the world." Below, you can view both the original graph and an updated version that includes data from January 27 and 28.

Visit our live blog for the most recent updates about the ongoing protests in Egypt. 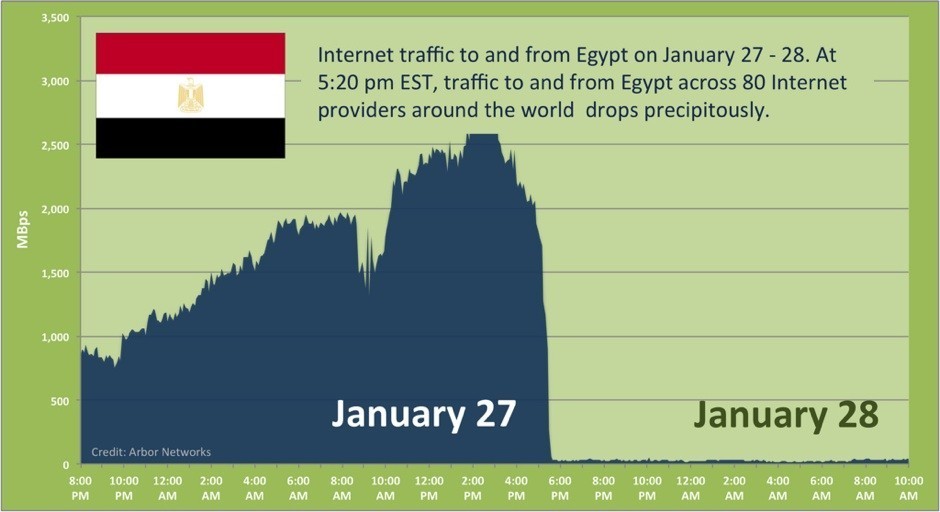