We're sorry. We really are.

Spring is officially upon us, which means a fresh crop of mosquitos, the buzzing of hungry honey bees and apparently, a lot of promiscuous flies. Getty photographer Nicholas Kamm captured these aroused arthropods in Washington, DC on Thursday. 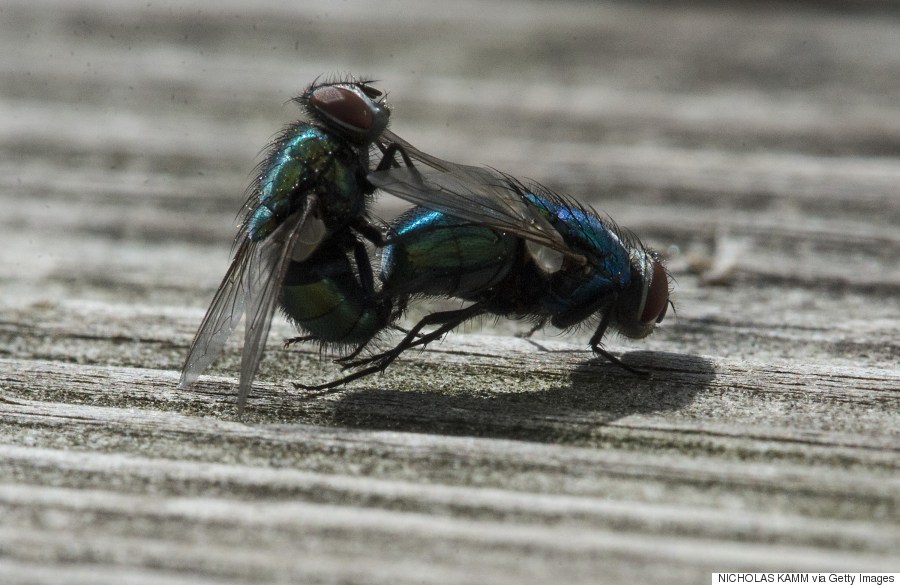 Flies' mating habits look surprisingly human. Male flies will usually approach a female from behind, sometimes in mid-air, but usually while both parties are on a solid surface, according to a 1964 paper on the breeding habits of the insects. After the initial "strike," things get interesting:

The male now reaches forward and strokes or "caresses" the head of the female with his prothoracic legs, which have been moved from their position on the wing base. It should be kept in mind that this reaching forward by the male occurs simultaneously with the outward movement of the female's wings. Some pressure appears to be exerted, for the female's head is forced down.

At times it appears that the male uses his head to "nuzzle" the head of the female, but this action is difficult to see since the flies are in constant motion. The female, if previously mated, may struggle violently to throw the male off.

A 2009 study also noted that female fruit flies fight to keep sex short and sweet, while males want it to last longer, according to National Geographic. "After about a minute and a half [of mating], the female begins kicking and struggling," co-author Kirsten Klappert told the outlet.

Let it be noted that George Carlin was very wrong. The comedian lambasted golf and golfers in an infamous attack, calling the sport a "meaningless, mindless activity" only engaged in by "white, well-to-do male businessmen."

"It's a boring game, for boring people," he said. "Do you ever watch golf on television? It's like watching flies fuck."

Golf may be a bore, but fly sex? We really can't look away, George.