I have one foot firmly enough on ground to know it sounds crazy -- but only one foot. The other half of me believes.

I think houses have spirits.

That's why it's important to do your chores and clean up. It shows them you care about and appreciate them, and that changes the energy they radiate back at you.

Not like they have veins and a lymphatic system tucked in between the HVAC unit. It's an extension of that feeling you get when you're a kid and your stuffed bear feels sad if he falls off the bed in the middle of the night.

And not like houses are necessarily haunted with the spirits of deceased humans. I think a house, itself, can be a d-bag.

I don't believe houses are alive, per se. But they're definitely not dead.

I know this because I used to live in a mean one.

I grew up in the Colorado mountains in an old farmhouse. Rumor was, it was built on an old Native American burial site. That would explain why the house's groans sounded like a slow rain stick, and why we found curious objects buried everywhere in our backyard: arrowheads, jewelry, painted rocks. It wouldn't explain the tiny, hidden room behind the bookshelf, though. We never knew what that room was for.

Growing up, I quickly compartmentalized my friends into two categories: Those who were too scared to come over, and those who quite possibly only wanted to be my friend so they could come over.

The latter became my best friends, and because I had no other choice, I became one of them: the odd crew. The crystal-collecting, alien-book-reading, scary-movie-watching mountain kids. I wore lacy, floor-length Gunne Sax gowns and full petticoats to school, and my neighbors and I played "circus," when other kids played, well, I don't know. What do normal kids play? I had a club with my five dogs and one (somewhat domesticated) wolf: the Diamond H Club. We had regular meetings to talk about the hauntings, which I chronicled in a "diarrhea" (that's fancy for "diary") entitled "Earth No. 2."

I did a goblin puppet show to the "Labyrinth" soundtrack, when the cool girls sang "My Boy Lollypop" and did gymnastics routines to New Kids On The Block.

But how could I care about Jordan (wasn't he the cute one?) when my house was such a grumpy, old brat, and I had to live inside of it? It regularly spit up old, rusty keys -- just randomly on a shelf, or in the corner of the playroom. Sometimes, we'd find piles of ashes (which added to my belief as a child that the carpet was made out of hot lava).

The house to the west of us was struck by lightning -- twice. The house to our east was nearly swept away in a flood. The house directly to the north caught on fire when the propane tank exploded. But our yellow farmhouse with the big red barn remained untouched.

It clearly wanted to be alone. So we moved.

In our new house, which my parents built from the ground-up (an intentional choice after living in a haunted house for a decade), I could feel the difference. At first, it was peaceful. The air was cool, slow and smooth. The new house was young, unscathed, grateful and happy. But something was missing.

I was in seventh grade, going through a "theater kid" phase, so my walls were adorned with those ceramic masks that were all the rage in 1992. I remember one night sitting in my room staring at the masks. The eyes were empty. I dared a ghost to tease me. Nothing happened.

It was so boring.

I missed my yellow jerkface house, with its raw sense of humor and defiance -- like a pucker-faced old man throwing mashed potatoes at the helpers in the cafeteria, pretending to be senile but totally doing it on purpose. Now, in a very normal house with a very normal temperament, I felt even freakier than before. Now, even asserting that houses could have spirits, I realized how completely ridiculous I sounded.

I was an outsider in my own bedroom.

Every few years, I still go back to visit that yellow house.

Every time, she tries to shoo me away with a scary stunt, usually involving a rattlesnake. Oh yes, she used to hide those things in my sock drawer at least once a month. I'm used to her old tricks.

And secretly? I think she's just a little odd and likes the excitement.

Maybe that's why I visit her, too. 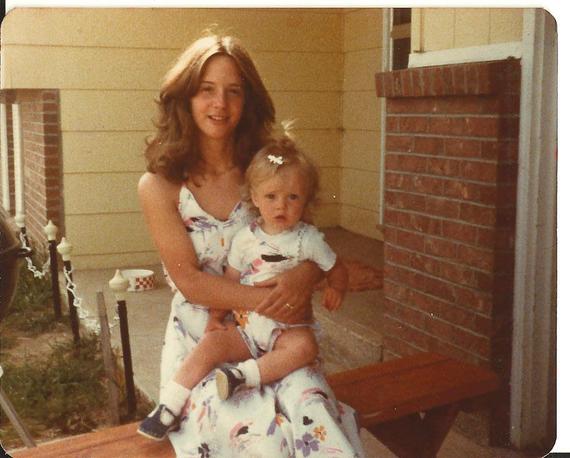 Photo: My aunt and I in front of my old yellow house.

Want to read more stories from the weirdest city in the world? Check out Only In Boulder.