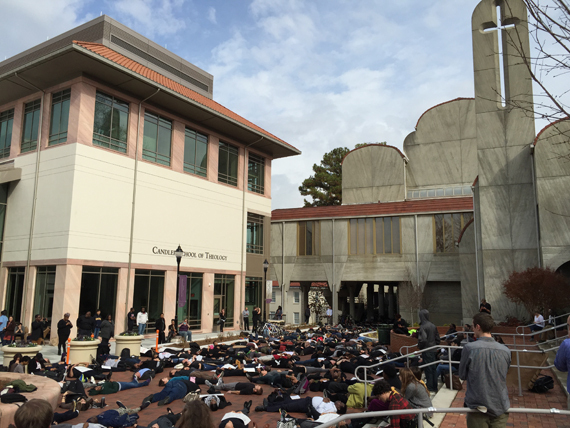 On Thursday, December 4, hundreds of Candler students, joined by faculty and others from the entire Emory community, participated in a "die-in" protest outside our school's chapel. While the die-in demonstration was important and moving, it was what happened prior to it inside the chapel that hit home for me.

During our worship service, students interrupted the planned liturgy to speak the names of the lives lost to police brutality and violence.

" Let us mourn black and brown men and women, those killed extra-judicially every 28 hours," they prayed. "Let us lament the loss of a teenager, dead at the hands of a police officer who described him as a demon. ... Let us be humble and listen to the pain, rage, and grief pouring from the lips of our neighbors and friends."

I was vested in a robe and sitting front and center as a member of the school's choir. I was also on tap to lead the Prayers for the People near the end of the service.

After the interjected prayers, the service resumed. Yet later, students again interrupted by beginning to chant, "Black lives matter!" as they led a mass exodus out of the chapel.

Among the very last to leave was my fellow first-year student Angela Johnson. She held a sign high as she processed toward the exit that read, "This is what theology looks like."

I sat stunned, at once admiring my fellow students' witness and bravery while also desperately conflicted about what I should do. I felt caught in the tension between institutional association and the belief that this was bigger than me or the institution of which I'm a part. Yet I was there as a committed member of the choir, and I was committed to lead prayers later in the service, I told myself.

In my heart, I was marching out of the chapel with my fellow brothers and sisters. But in reality, I sat still in my seat feeling crushed inside.

How will I possibly stand up and lead the scripted petitions to God, I thought? I felt so conflicted and disturbed. I felt like I was left as an outsider, wearing my official school robe as a badge of shame. I silently prayed that the Holy Spirit would lead me through the prayers, and somehow, through God's grace, I managed to do so. The planned prayers ended up being appropriate:

"We pray for your servants gathered here -- and those who are no longer here: Fix our eyes on the places of injustice in your world, that we might participate in the great reversal of which the Gospels tell."

Struggling to focus the rest of the day, I kept replaying the walk-out and the "die-in" afterward in my head. Ultimately I came to the realization that this was all good. It was good that I felt disturbed. It was good that I was made to feel like an outsider. As has oft been quoted in recent days, the Rev. Dr. Martin Luther King, Jr., taught us that "a riot is the language of the unheard." While my fellow students' demonstration was by no means a riot, its point was indeed to disrupt things. It was intended to make me think and to challenge me.

As I've written before, my only small reality enabling me to see slightly past the privilege of being a white cisgender man born in the U.S. is the fact that I'm gay. And because I wasn't alive during the civil rights movement, my only experience of witnessing historic changes to our justice system is the recent wins in LGBT equality.

Yet it seems to me that the nationwide uprising we've all witnessed following the non-indictment of the two white male police officers who killed Michael Brown and Eric Garner has unleashed a movement that is more than riots, protests, "die-ins," and other acts of civil disobedience. Ultimately what so many people are crying out for is the validation of their very lives -- and a recognition that their nation's laws and justice systems are so flawed in a way that they value white lives over black and brown ones.

And for theology students, and people of faith especially, these events cry out to us with the question, how are we going to participate in bringing about needed change?

In the words of Candler's student body president and third-year student, Samuel Lee White III, "There is no place better than the ivory tower of academia where conscience is enamored by activism, to learn how all life is interrelated and flourishes in intentional community."

And so I thank my fellow students for the opportunity today to be both challenged and inspired. And Angie, I couldn't agree more: that was definitely what theology looks like.