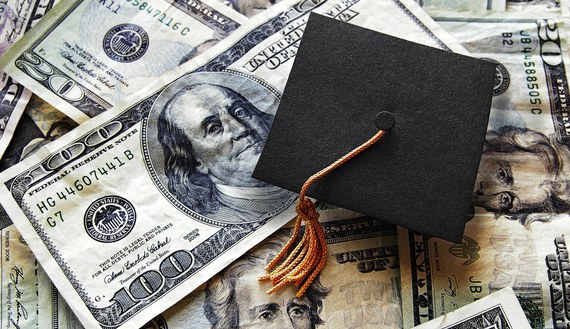 Graduation is finally upon us, and if you're one of the apprehensive seniors forced to give up college life and get that degree, you're probably freaking the f*ck out. Obviously getting a job is jarring and paying your own bills is even more so, but paying back your student loans is probably the worst element of post-grad life you'll encounter. Until you get married and have a kid -- then your life is really over.

But back to a problem you can actually control: what if everyone stopped paying their student loans together?

In an article published by Vice last year around graduation, writer Jennifer Schaffer spoke with Andrew Ross, an NYU professor who's also a member of the Debt Collective and an advocate for debtors' rights. She asked him what would happen if everyone collectively stuck it to the man and sacrificed their credit scores.

In the likelihood that you want to do just that, we reminisce on what could happen if you completely abandon your student loans with the rest of your graduating class, according to a professional.

When questioned what would happen if post-grads stopped paying their student loans altogether, Ross reveals that it's actually already happening.

If you look at the rates of student debt default, one in three student debtors are in default. So it's already happening on a mass basis. It's just happening individually, so you don't necessarily see any political impact. But millions of students are in this predicament, and they simply can't pay back their debts, even if they wanted to. It's not a question of meeting your responsibilities: These people simply cannot pay back their debts and will never be able to. So we are in that kind of situation as a society where we have turned higher education into the cruelest of debt traps. It should be a social good. It should be a social right, in my opinion. And it's turned into the cruelest of debt traps from which only students from well-heeled families can escape.

Now, in the Occupy Student Debt campaign we had set a goal of finding 1 million students who would agree to collectively default, back in 2011. We didn't get anywhere near those numbers for all sorts of reasons, but 1 million student debtors did actually default that year. They just did so individually; if they'd collectively defaulted as we had planned, then we would be having a different conversation. We'd have had a political impact. And that's why we decided after several years to start much smaller. We started the Debt Collective with a much smaller group, but we've already had quite an impact with that small group, these 100 or so students who went on debt strike.

Ok so you should probably join the Debt Collective if you're thinking about doing this. If we've learned anything from this election cycle, it's that virtually no one listens to one person. But 70,000 people? The public has no choice but to hear them.

So what should people do? Ross elaborates,

What kind of political result do you think is actually feasible, if millions of students stop paying their loans?
A strike of any kind is a tactic. It's not a solution. It's a tactic towards a goal, and the goal here ultimately is for the US to join the long list of industrialized countries around the world that make it their business to offer a free public higher education system. None of these other countries are as affluent as the US; there's no question that this country could afford to do so. In fact, we produced an estimate not that long ago about how cheap it would be for the federal government to cover tuition at all two and four-year colleges. There are several estimates in circulation, and a few years ago that kind of proposal was dismissed out of hand. But now we're beginning to see it pop up on Capitol Hill in various forms. It's a proposal that's part of Bernie Sanders' campaign for president. It's a proposal that pushed President Obama in the direction of making community colleges free, at least for two years. It's becoming a little more respectable to talk about [solutions for student debt], on Capitol Hill and in the public sphere in general. None of that would have happened without a student debt resistance.

Valid point. But he also points out that the organization of these kinds of groups is the most important element to collectively going against student debt. Without it, you're not getting anywhere.

So is it possible? Or course. Would you want to do it and sacrifice the possibility of ever buying a home? That's up to you.

If worse comes to worse, you can always move to Europe.