Washington, D.C. is an absolutely beautiful city. In fact, as someone who used to live "inside the Beltway" when I was one of tens of thousands of interns in the Washington area, I came to appreciate everything that America's capital city had to offer. The food is outstanding; the diversity of the city's population is a microcosm of the American population at large; most of the people I encountered were friendly, and the history is second to none. The only thing I despised was the summertime, when the blazing heat got up to the triple digits and the humidity was so bad that I at times felt like dropping dead on the sidewalk from exhaustion.

So, when you hear the common refrain about Americans hating Washington, they aren't talking about the city in general. Rather, they are referencing the politicians, lobbyists, campaign staffers, and the black-and-white, us-versus-them partisanship of U.S. politics. There is a reason why Congress rarely gets above 25 percent in the approval ratings -- tens of millions of Americans are tired of the snark, backstabbing, the hypocrisy and the near-ending name calling that we have all come to expect on House of Cards (Season 3 coming this week!)

Indeed, hating Washington is such a popular position to have that politicians who have been in Washington for decades try to cast themselves and their brands as anti-establishment, blue-collar and outside-the-beltway. Off the top of my head, the only person I can think of who has done this successfully over the decades is Vice President Joe Biden, a man who has been a fixture in the Washington politics since 1973, but carries himself like a fun-loving, gaff-prone average Joe.

If there was ever a time that exemplifies the Washington that Americans have growth to hate, it has been the last two weeks. Whether it's a ridiculous partisan squabble about what to call the effort against the Islamic State, the very real possibility of a Department of Homeland Security shutdown or politicians questioning the Presidents patriotism, religiosity and love for country, the last few weeks are exposing the ugly, vile, out-of-bounds bickering that Americans of all ideologies, parties, incomes, races and ethnicities are tired off. It's gotten so bad, in fact, that a stupid remark from a politician elicits nothing but an eye-roll. The insults, in other words, are so frequent that expressing outrage seems like a waste of valuable energy. 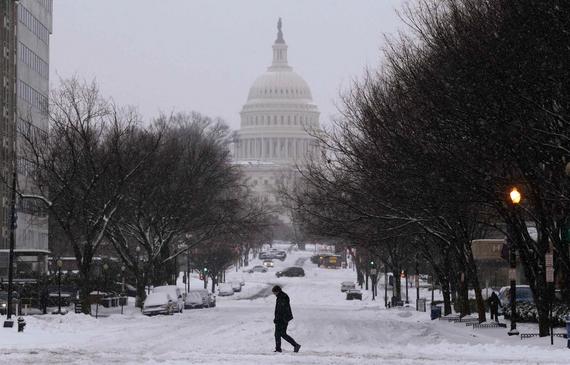 The mainstream press doesn't help matters either. There was a time several generations ago when CBS, NBC and ABC were the only networks available for Americans who were interested in what was going on around the world (think of the days of Walter Cronkite, Dan Rather and Peter Jennings). Now, Americans have endless news happening 24-hours a day, seven days a week, from CNN and FOX to Al Jazeera America and the BBC (my favorite).

This would be an outstanding development for the news junkie, if it weren't for the fact that questionable, personal remarks from political figures often get as much airtime as the mass killing of men, women and children in Syria by the regime of Bashar al-Assad. This weekend, a popular television network, which I will not name, spent nearly 30 minutes of an hour broadcast on Rudy Giuliani's comments about President Obama. This included two people from polar opposite political persuasions screaming at one another about whether Giuliani should apologize or whether his comments had merit.

Chuck Todd of NBC's Meet the Press had it about right when he brushed on Giuliani this past Sunday. "I've hated this story in so many ways," Todd said. "I think it brings out the worst in the press. I think it's bringing out the worst in some politicians. And it's a race to the bottom. And now we know why everybody's cynical about the press and politics."

I applaud Chuck Todd for pointing this out, because I suspect a lot of people in the United States feel the same way.

In today's Washington, it's more important to prepare for the fallout when something goes wrong, expending about as much energy on pointing fingers as on solving the problem itself.

Republicans and Democrats are already bracing themselves for the inevitable fallout over a DHS shutdown at the end of this week, rather than acting like the adults that we all expect them to be (on DHS funding, Senators John McCain, Marco Rubio, Lindsey Graham, Bob Corker and DHS Secretary Jeh Johnson are welcome exceptions).

The sad part is it's not even an election year.