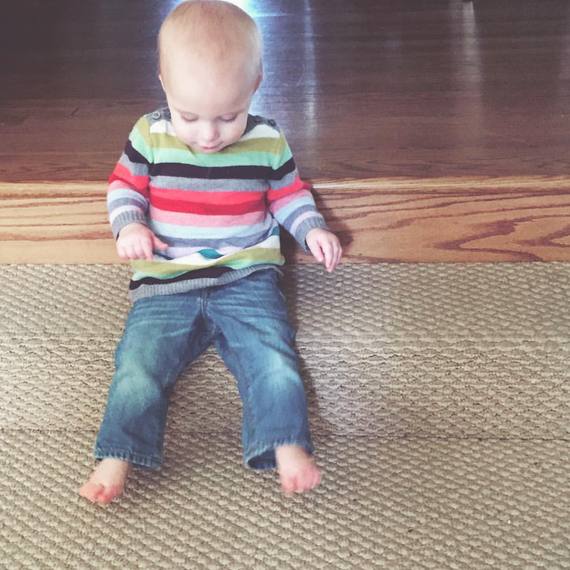 I cuddle and hold her and for this one moment in our entire day she seems like a tiny girl again. She tries so hard to be a big girl, like her big sister. She is a big girl -- and then she asks me to nurse.

Hearing an almost-2-year-old ask to nurse is possibly the cutest thing ever. Sure, she doesn't need my body for food, the way she did when I fed her as an infant. I try to show her also that we can snuggle, and that I can comfort her, without having to breastfeed. But she wants to nurse, and I want her to.

To be fair, she didn't want to stop nursing during the day, but I forced it. It was sad at first, and upsetting for both of us, but she was showing signs that it was time to give it up, so I led her. Now, however, she still happily breastfeeds in the morning and at night. I know it's not much, and even this will probably be given up soon, but she likes it and I do, too.

She's my second child. I breastfed her big sister until she was over 2 as well. People don't want to talk about breastfeeding toddlers, and I don't think it's completely a "taboo" thing, so much as most of the people I try to bring it up with just don't do it. But I do -- we do.

Nursing a toddler is nothing like nursing an infant. Instead, it's special and awesome and wonderful in its own way.

I breastfeed my toddler, in part, because I'm lucky enough to be able to. I'm overjoyed that we both took to nursing in the first place and that it's something we've kept up. This once in the morning and once at night routine of ours is familiar and soothing for both of us, and yet it's not as straightforward and "easy" to nurse a toddler.

I hold her and she sometimes kicks me in the throat, or she moves and wriggles. Occasionally she tries to sing "Twinkle Twinkle Little Star" while nursing. Last night she insisted on putting a sock on as a glove before we had our nightly session. She has a mind of her own and, because of this, nursing an almost-2-year-old is nothing like nursing a smaller baby.

Nursing a toddler is nothing like nursing an infant. Instead, it's special and awesome and wonderful in its own way.

More, as I reach the end of our experience -- and as I recognize this might be the last time I breastfeed a child -- I can't help but reflect back on why exactly I've loved doing this for both of my children so much.

I've loved this connection -- I've loved how special and unique it is with each of my daughters. In many ways their personalities are nothing alike, and nursing them has been completely different. I'll admit I've loved being needed, especially as my toddlers grew and began to assert independence whenever possible -- I've enjoyed being reminded I'm "Mom," and I'm a necessary part of their lives.

This isn't to say other moms who don't nurse, much less into toddlerhood, are any less of a needed mother. It is to offer that many nursing moms feel excluded when we get in public and everyone's pulling out bottles and snacks and we know what our babies want, and we either have to become OK with being -- what feels like -- confrontational, or we have to simply accept that we need to be brave, and loving.

In my house, it means I have a self-imposed curfew when I get invited out, but I need to be home to nurse my child. It means my family's morning routine is centered around our children; on my oldest having to get to school and my toddler wanting to nurse when she wakes up. But this is my choice. I know I'm not alone in this choice.

The reason I breastfeed my toddler is simple -- it's because I love her.

It shouldn't be confrontational or unusual to care for our children in the ways that work best for them and for us as parents. It shouldn't feel so weird to talk about nursing my not-quite-2-year-old. It shouldn't be strange, but often it is.

And the reason I breastfeed my toddler is simple -- it's because I love her. It's because these waning moments in my day, when I hold her warm little body so close to mine, are ones I hope to hold inside of my mother breast long after they're physically gone.