As I was getting shooed out of a sex shop in Santiago, Chile, the other day, I was left wondering: Why travel??

A few hours earlier, I had been hunting for Internet after my Wi-Fi crashed, and found myself running through the stone streets of Santiago, dodging stray dogs dressed in colorful coats, faltering at every 800 peso deep-fried cheese-jammed empanada stand, hair frizzing from the sweat bursting through previously uncharted scalp pores, hesitating again at the dulce de leche-injected churros stand, and cursing the heels my friend had insisted I buy because, "No one wears flip-flops in the winter here; you look like a tourist." 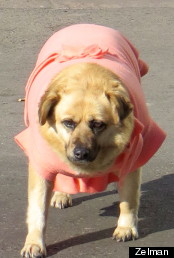 She cocked her head and made a shooing motion. "No, no es un café internet." I scampered away, defeated.

It took another hour before I finally found a coffee shop, bought two empanadas, settled in, saw my computer's Wi-Fi lines darken, and realize that, although it took me four hours, a sex shop visit and two empanadas, I can do this.

For the "I can do this" moments.

Why pay to scurry through an airport to find your plane is either delayed or canceled or both, sit next to the excessively long-legged man who falls asleep and drifts his leg over into your section as you strain to peek at his TV screen for nine hours playing "guess the plot" since your own screen is broken?

I left behind an apartment overlooking the New York City skyline, friends who came to my birthday party even though I chose a bar 23 minutes from the nearest subway stop, a family so close that my mom regularly baked cookies for the office, and dogs who fell asleep so soundly on me that I could feel their little hearts thump against my chest.

I left my comfort zone to broaden my world view, but also craving the uncharted "I can do this" moments of travel, glimmers of successful discovery followed by bursts of confidence, fleeting but brilliant.

My first "I can do this moment" in Santiago occurred after two hours in the wrong airport immigration line and another hour explaining to an officer that (as my official statement reads), "I just completely forgot I had that apple in my backpack." My teeth were stewing from 26 hours of unbrushed neglect and my pee had been held since hours earlier when I took advantage of the free in-flight juice options.

Drained but wired on "I'm in a new land" endorphins, I started wandering the streets. The first day of travel is the best to simply get lost, basking in the foreign smells and sights, clinging to these unfamiliar sensory observations before they become the new normal and ignored.

Take trees and traffic lights, both rarely appreciated at home, but boggling to a newcomer.

Santiago has a pedestrian traffic light that features a very helpful green man performing suggested actions. If you are low on time, the man will start jogging. If the light is about to change, the man breaks into a sprint.

As for the trees, one type features branches that jam out horizontally, bare until their leafy tips, like a cheerleader making a "T" with her green pompoms.

My father's advice for travel: "Read local newspapers, drink at local coffee shops and make local friends." Yet the simplest things back home -- walking into a coffee shop, buying a newspaper -- take a gust of confidence to conquer in a foreign land. I took a breath and approached a street kiosk. 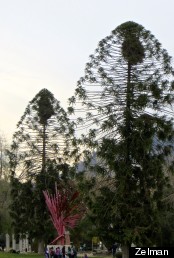 I corrected myself, "Or ah, hello. Hola."

The man behind the kiosk smiled, and asked how I was: "Hola. Como esta?"

"Estoy bien, gracias. Y usted?" Okay now. I don't know where in my brain that phrase was being stored. I pushed back a tiny, creeping smile. I pointed to the most serious-looking newspaper: "El Mercurio?"

He handed me the paper. I paid. In Chilean pesos. I had the newspaper. He had the money. I let out a breath. I can do this.

Why travel? Because I can do this.

Cerro Santa Lucia: A small hill of winding stone steps and fountains, with a view of the city and the Andes peaking through the smog. For a longer hike and broader view of the city, check out Cerro San Cristóbal.

Mote con Huesillos: Sold from street carts, this cup of cooked barley, peaches and syrup makes a surprisingly magical mix. Watch out for the peach pits.

Valparaiso: Take a day to visit this seaport city. Its colorful homes packed into the hillside and art pouring into the streets is a must-see.

Here are some photos of the many dogs in Chile. If you want to help animals in need, check out the Humane Society International's website.

The Dogs Of Chile

Dear New York, We Need To Take A Break

Life Is What Happens When You're Killing Time...Even With A Dead Camera, 120 Yen And A Lot Of Sleet

When My Mother Heard I Was Traveling Along To India...