Long after the roses have died and the chocolate has been eaten, you might have your Valentine to thank for a whole host of health perks. Here's what love can do for your heart, brain, happiness and more. 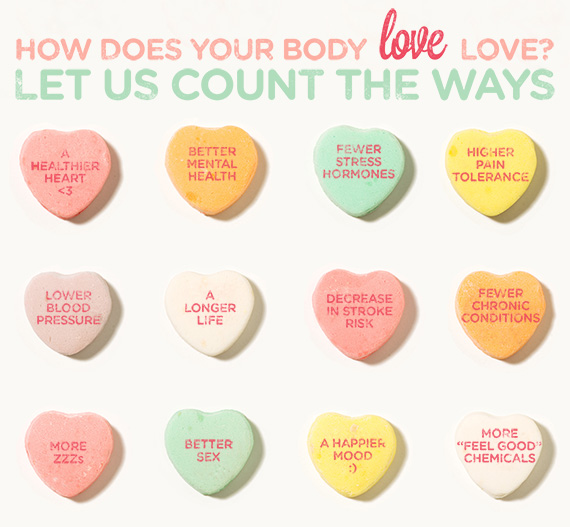 Love is good for the ticker. A large 2013 study from Finland, published in the European Journal of Preventive Cardiology, showed that marriage reduced the risk of both fatal and non-fatal heart attacks among men and women of all ages. The researchers looked at a register of more than 15,000 "acute cardiac syndromes" (which includes both fatal and non-fatal cardiac events) over 10 years -- the participants were all over 35 and lived in one of four regions of Finland. They discovered that cardiac events were 58 to 66 percent higher in unmarried men and 60 to 65 percent higher in unmarried women, compared to their married peers. And 28-day mortality rates were 60 to 168 percent higher among unmarried men and 71 to 175 percent higher for unmarried women.

What's more, a study published earlier this month in the journal Psychological Science showed that having a supportive spouse was associated with lower levels of coronary artery calcification, or hardened arteries. And research has shown that married people are three times more likely to survive heart surgery in the three months following the operation compared to singles.

Plus, a 2012 study in the American Journal of Public Health identified a link between same-sex marriage and mental health benefits, ABC News reported. "We know that heterosexual marriage provides a higher perception of social integration and support," study author Allen LeBlanc, a professor of sociology at San Francisco State University, told ABC. "It makes sense that same-sex marriages would carry some of the same benefits."

For a 2010 University of Chicago study, researchers conducted several experiments with 500 study participants to stimulate a stressful experience, collecting saliva before and after to test their levels of cortisol (a stress hormone). While all the participants experienced a cortisol spike after the experiments, people in marriages or in a committed, romantic relationship had lower levels than those who weren't paired up.

"Although marriage can be pretty stressful, it should make it easier for people to handle other stressors in their lives," lead author Dario Maestripieri, a professor in comparative human development at the University of Chicago, said in a statement. "What we found is that marriage has a dampening effect on cortisol responses to psychological stress, and that is very new."

Could love be a painkiller? Maybe so, according to research published in the journal PLOS One in 2010. Researchers exposed 15 study participants, all of whom were in the first nine months of a new relationship, to periods of moderate and high thermal pain. While doing so, they either looked at a picture of their partner, looked at pictures of an equally attractive acquaintance or completed a word-association task that's been shown to distract from pain. While both the first and the third greatly reduced pain, looking at pictures of a romantic partner also activated the brain's reward systems.

"Greater analgesia while viewing pictures of a romantic partner was associated with increased activity in several reward-processing regions, including the caudate head, nucleus accumbens, lateral orbitofrontal cortex, amygdala, and dorsolateral prefrontal cortex -- regions not associated with distraction-induced analgesia," the researchers wrote in the finding. "The results suggest that the activation of neural reward systems via non-pharmacologic means can reduce the experience of pain."

“There seem to be some unique health benefits from marriage,” lead author Julianne Holt-Lunstad, a professor at BYU, said in a statement. “It’s not just being married that benefits health -- what’s really the most protective of health is having a happy marriage.”

Several studies have identified a link between marriage and longevity. One 2011 study published in the American Journal of Epidemiology, for instance, suggested that single people may die close to a decade earlier than their married peers, NBC News reported at the time. According to the finding, a single man's risk of death was 32 percent higher over the course of a lifetime than married men. That number was 23 percent for single women vs. married women.

“If you’re a couple, a spouse may be after you to eat better and go the doctor,” lead author David Roelfs, assistant professor of sociology at the University of Louisville, Ky., told NBC. “Sometimes it’s just easier to be healthier and less of a risk taker when you’re married.”

Research presented at the 2010 American Stroke Association's International Conference suggested that marriage might protect men from stroke -- but it has to be a happy one. The researchers evaluated data that had been collected from 10,059 civil servants and municipal workers who participated in the Israeli Ischemic Heart Disease Study in 1963. The participants, who had an average age of 49, were tracked until 1997. Among the results were that single men had a 64 percent higher risk of fatal stroke than married men, and those who were in unhappy marriages also had a 64 percent increase compared to men who said their marriages were successful.

But while the research is promising, it's hardly conclusive: "How much this reflects associations between being happily or relatively happily married and stroke-free survival in other populations, at later times, is not readily deduced," study author Uri Goldbourt, Ph.D., said in a statement.

Here's something to thank your Valentine for: Research has linked being in a happy marriage with a lower risk for chronic illnesses, compared to people who are divorced or widowed. What's more, according to 2013 research from the University of Missouri, people who are in good marriages tend to rate their health better as they age.

"We often think about the aging process as something we can treat medically with a pill or more exercise, but working on your marriage also might benefit your health as you age," study author Christine Proulx, an assistant professor at the university, said in a statement. "Engaging with your spouse is not going to cure cancer, but building stronger relationships can improve both people's spirits and well-being and lower their stress."

Even if you share a bed with a cover hog, a happy marriage could be good for your Zzs (at least for women). Research presented at the 2008 Associated Professional Sleep Societies showed that women in happy marriages sleep better than their unhappy counterparts. “Marriage can be good for your sleep if it’s a happy one. But, being in an unhappy marriage can be a risk factor for sleep disturbance,” lead author Wendy M. Troxel, a psychologist at the University of Pittsburgh, told HealthDay News. Indeed, the finding suggested that happily married women had a 10 percent greater likelihood of banking a good night's sleep, the publication reported.

Despite the stereotype, married people may actually be more active between the sheets than their single counterparts. "Studies have found that married people have more sex than single people, and they also have more varied sex," sexual health expert Dr. Laura Berman told HuffPost Weddings in 2012. "Oral sex is also more common among married people."

And that's good news in the health department, considering sex has been linked with a stronger immune system, lower blood pressure and even, interestingly, increased libido.

Maybe there's some truth to the old "happy wife, happy life" cliche. One Journal of Research in Personality study found that happiness spikes in the year after marriage, and remains higher over the years than it would have been if people were to remain single.

"Our data suggests that married people are happier than they would have been if they didn’t get married," study author Stevie C.Y. Yap, a researcher in MSU’s Department of Psychology, told HuffPost Weddings when the results were released. "Marriage protects against age-related declines in happiness."

And other 2012 research showed that cohabitation may also be linked with an uptick in happiness levels.

In her research, anthropologist Helen Fisher took scans of the brains of people madly in love and found activity in a part of the brain where cells make the neurotransmitter dopamine, a chemical associated with the brain's reward system, she explained in a 2008 TED talk. "In fact, the same brain region where we found activity becomes active also when you feel the rush of cocaine," she said.

Romantic relationships also trigger the production of oxytocin, a.k.a. "the love hormone," which can be stimulated by activities such as cuddling and kissing and produces feelings of well-being. “The increase in oxytocin during the period of falling in love was the highest that we ever found,” psychology professor Ruth Feldman of Bar-Ilan University in Israel told Scientific American of her research.