Parents: How tired are you?

I thought so. But why?

Is she really asking me why?

I am. But only because I just figured something out that I should have understood years ago. Yeah, my body is tired, but if I'm being honest, it's my mind that could really use a 12-year nap.

Some of our exhaustion as parents is indeed physical. In terms of small children, it's things like the endless clean-up and assistance factor. With babies, it's sleep deprivation. Lugging an infant car seat around. Schlepping a stroller in and out of the trunk. The gear. The nursing. It's tiring, for sure. But I feel like my body, most days, can handle the running around, the lack of sleep, the 1,363 lunges to pick up the dropped food and the toy that keeps hitting the floor, the wrestling of the baby into a jacket.

But what I've only recently put my finger on is the mental exhaustion of raising kids. I don't know why it took me so long to figure this out. Perhaps cause-and-effect equations have never been my strong suit. Or maybe I just haven't been able to hear myself think since 2007.

I've come to realize that my brain is completely dulled by noise. It sounds obvious, right? The constant hum, or roar, of noise in a house with kids. Sometimes, it's in the background -- a zillion consecutive bing bing bing bings of my son battling Stormtroopers in the family room. Or my daughter singing the first and only line she knows from the Frozen songs, over and over and over. Don't get me wrong: It's charming at first, when not drowned out by the baby crying or, on our best days, everyone competing with each other in one dysfunctional crescendo.

Other times, the noise is distinctly in the forefront. The crying. The bickering. And, of course, the questions. You know, childhood. 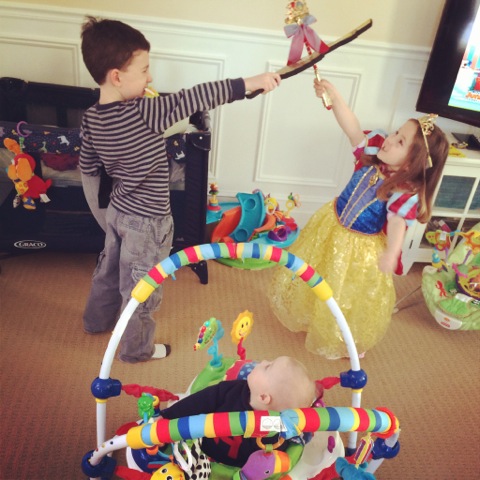 Of course I expect noise. It comes with the territory. But at some point, it began eating my brain and swallowing things like complete thoughts and witty remarks.

But it's not just the noise that drives us to the brink of exhaustion. It's problem-solving, mediation and debate. Why didn't I pay closer attention to these subjects in college?

Solving complex equations, for starters. I read somewhere that a woman's brain is like having a million browser windows open at the same time, and it's true. Behold:

I know I am far from alone in saying that I go to sleep and wake up with my brain firing like this. It is the anti-calm. Especially when it is repeatedly interrupted mid-thought by shoe tying and bathroom assistance requests.

I remember from my corporate days the feeling of my mind overloading with fluid information and critical facts to make a quick decision. And, honestly, most days, the sh*t running through my head now is somehow just as stressful. I know that's hard to believe. And I say this not to pit working moms against stay-at-home-moms, because I have been both, but to map out a frame of reference. (Unless you work for the woman who was my boss from 1999-2003, in which case, you win the stressful gold medal. Please step forward to retrieve it, along with your express ticket to heaven.)

If complex equations are not wearing you out, let's visit the lost art of sibling mediation.

Today, for instance, I negotiated the following:

I keep looking for my diplomat license plates to arrive in the mail, obviously, but the UN seems to have lost my address. I need to follow up with them because those plates could probably get me some preferential placement in the school car line.

And, finally, debate. Why, oh why, did I not doggedly pursue a spot on the varsity debate team? I would be so much more eloquent and prepped in my rebuttals to the following broken record:

It's the phenomenon of most requests being met with some caveat, protest or level of resistance. On my best days, my responses are calm and textbookish and parental. On other days, they are emotional and tired and, well, parental.

I know it's not just the sounds within my house that are exhausting. They echo off the walls in every family. And I'm sure these sounds and debates morph as kids grow. They change into real problems and issues beyond requesting a snack every 76 seconds or choosing exactly which cup should be for milk and not for water because who the hell knows why. I anticipate that weariness comes from very deep worries and debates escalate over truly legitimate concerns down the road.

And do I dismiss the noise of laughter, bad knock-knock jokes, a baby cooing and family room dance parties? No, I don't. That noise reboots my brain when its levels hit that of the blinking red light on my phone battery (has anyone seen my charger?).

I appreciate that feeling like my ears are bleeding from the sound of my name being called is something I will miss when they no longer need me for every little thing. And that day will be here sooner than I can imagine.

But, in the meantime, I think it's OK to feel exhausted and grateful for the tiny pockets of quiet between the madness.