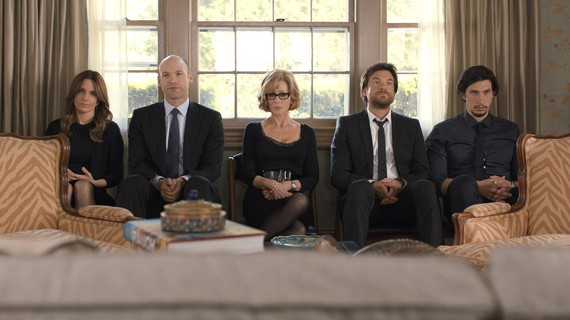 Jewish characters on Television. Jewish characters in movies. This is absolutely nothing new, but the fact that we're veering from clichés, from what looks like familiar Jewish terrain and the stories everyone hears (remember the one about the hole in the sheet? Well, that's not true) is something unique to television and the movies. In This is Where I Leave You based on the Jonathan Tropper novel of the same name, Tina Fey, Jason Bateman and Jane Fonda are amongst the gentiles playing Jews, their characters sitting shiva (the 7 day mourning period) for the departed family patriarch. I can't seem to recall any other blockbuster that had shiva as the backdrop to a humorous blockbuster movie with a star studded ensemble.

On a related note, quite impressive to me was how the new Amazon show Transparent accurately portrayed a Chevra Kadisha and its rituals. Chevra Kadisha refers to the group of Jewish men and women who see to it that bodies of Jews are prepared for burial according to the finite decrees of tradition, protected until burial. Well, I didn't intend to start on a morbid note, but I wanted to highlight the point that the things about Judaism that we don't normally see on TV or in the movies are being shown. Between recent references on the Goldbergs, and The Big Bang Theory (produced by "Chaim Levine" as Charlie Sheen once enlightened us) and even on Andy Cohen's Watch What Happens Live, we are learning more things about Jews that we didn't know before. For instance, Andy's "Mazel" of the day has caught on in such a huge way that guests Nathan Lane and Andrea Martin seemed like they couldn't get under their fleece "Mazel" blankets fast enough. The Judaism we see in entertainment today is frequently co-mingled with the acceptance that modern Jews try to balance it all, even other people's holidays. As the character Wendy Altman (Tina Fey) says to her mother (Jane Fonda) as they sit on the low stools for the mourning period of shiva "Mom, you're sitting in the exact same spot we put our Christmas tree."

Families and traditions have blended over the years, but more accurately and prevalently, holidays have become commercialized. So many people have wished me a Happy Halloween and I just say thank you, whereas years before I would have responded "Thank you, but I don't celebrate it" which would elicit many discussions. At present, I see Halloween as a commercialized American holiday and not "Hallow's eve." Its origins (pagan, I've been told) make no difference to me. It is simply my indoctrination that has impacted why I treat my door visitors rather than trick or ask for treats myself. I do light up at Chanukah and appreciate a Thanksgiving (an American holiday that has nothing to do with Judaism, but hey, I'm American!) with turkey, sweet potato and cranberry to relish. In essence, we're all a mix of something -- be it patriotism or borrowed religious customs that have taken on commercialized, modern appeal.

Whereas Jewish characters used to be neurotic, apologetic and many times insufferable (I'm thinking about Woody Allen but we can go back even further to actors who played Faygin and Shylock on stage), today we have the gorgeous and brilliant Ziva David on NCIS, who was a Mossad agent and became a focal character (she is actually played by a non-Jewish, Chillean-born American actress named Cote de Pablo who was so dedicated to and immersed in this role, she suffered several injuries on set and persevered). NCIS was really able to capture that this was a female character, who because of her background in Israel, was not intimidated by powerful men. She is a physically strong woman with a sharp mind who has mainly worked alongside men so it was the next logical step for Ziva to become an NCIS agent.

Ethiopian and Russian Jews have integrated rather well into Israeli culture, but not without obstacles in everyday Israeli life. We could glean so much from these sort of characters on American television. Yet, while we are amused with characters played by Demi Moore making a bracha before engaging in oral sex (Deconstructing Harry) and a voluptuous Jane Fonda forcing her unobservant family to observe a difficult seven-day mourning period (This is Where I leave You), we don't get to see actors like Lupita N'yongo play an Ethiopian Jewess or Mila Kunis, Scarlett Johansson or singer Regina Spektor (all originally Russian Jews) play the Russian Jewess. Of course, there is still time and there are lots of roles to create. For now, we see more common themes about Jews on television and in movies, while we are only beginning to branch out. The whole "Jewish guilt" theme underlies This is Where I Leave You with a brave Tina Fey taking a sisterly, yet matriarchal role and throwing a punch for her brother.

Getting back to Woody Allen; he used to make me nervous with his incessant rambling and vocalized neurotic breakdowns in movies. I'm not disparaging his writing at all, which is of course, clever, but I wondered if we would get to see Jewish characters who were polar opposites of his forever-agonizing brittle man. Fortunately, we have, and Tina Fey is only one such character. It also doesn't hurt to have "Jews" like Fey, Bateman and Fonda who are physically attractive. Believe it or not, there are still people in parts of America and other areas of the globe who have a much starker picture of "the Jew" in their minds. I met with evidence of this when a Midwestern man told me he was surprised I was blue eyed and blonde (ok, blondish with some help...) and that people in his town still thought Jews had horns. I know that sounds completely archaic, but this particularly conversation took place in 1999 at a karaoke joint in downtown Manhattan.

Maybe that's an archaic reference in and of itself: "1999!" Since then, Israeli-born and raised (in her earliest years) Natasha Lyonne (formerly Braunstein) has wowed us with her acting chops in Orange is the New Black and an adorable Jewish kid named Yaniv Schulman dubbed the term "Catfish" which everyone with Internet knows, is more connected to Manti Te'o than flounder. Natalie Portman is also an Israeli-born Jewish actress who has been vocal about her desire to raise her children Jewish, but has expanded to more secular roles on film. It is no secret that Winona Ryder is Winona Horowitz, but how connected she is with her roots is unclear to the public. You can scroll through the lyrics of Adam Sandler's songs to discover how Jewish (even a quarter) Hollywood is. Whether Sandler's Jews are the ones to step up to the unexplored roles pertaining to Jewish life is of no consequence to me.

Many talented actors can successfully play Jews, but we need writers similar to Jonathan Tropper (who wrote the book and the adapted screenplay for This is Where I Leave You), who have the Jewish background, to enlighten us to areas of Judaism previously unexplored and shed light on where we Jews find the humor. Jill Soloway, the creator and main writer of Transparent, has been able to enlighten us about why Jews cover mirrors during shiva and explain the unexplored topic of Chevra Kadisha. With all the jokes today about the cost of Jewish education, it has been refreshing to see Jews and gentiles in Hollywood coming to understand difficult traditional Jewish concepts without a yeshiva background. Not only that, some of the writers, like Transparent's Soloway, have been able to convey the respectful and beautiful aspects of little understood traditions.

As a Jew, I will be the first to admit that I'm sometimes skeptical of my own people's rituals, and when I see the way a talented writer and director has treated the issues (whether it be via humor or through a more serene setting), my education continues. TV and the movies are not always accurate (that's an understatement), but I have the background to weigh in using what I learned in the past. Hollywood Writers: keep the Jewish themes coming and continue to step outside the box. Like Jill Soloway and her co-writers at Transparent, continue to impeccably research your themes. I'm acquainted with Jews and non-Jews alike who are eager to have the discussions that your works inspire.

More:
jewish culturethis is where i leave you moviereligiontransparentJewish