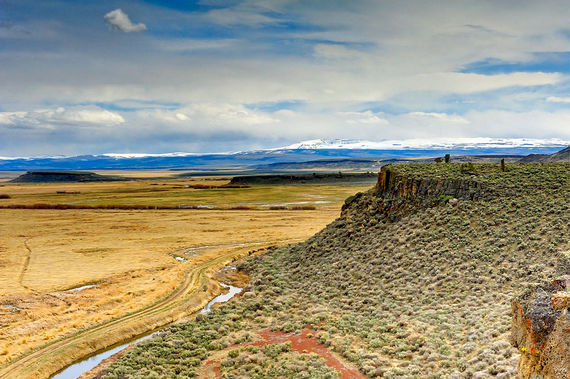 Caption: A view of the Steens Mountains from the Buena Vista Overlook located in the Malheur National Wildlife Refuge, Oregon Department of Transportation.

The standoff of armed ranchers occupying Malheur National Wildlife Refuge is now over. They represent the deepest rift in humanity's relationship with land. They argue that all lands "belong" in private ownership. On the other hand, the land is currently held in public trust; the public being all Americans including the native Paiute for whom that ground is ancient homeland, and the non-human beings under the heading "wildlife" who come for the concept "refuge."

Ownership versus public trust makes for a mighty big split. The Paiute view of land is not as property but as identity-defining holy ground. The closest we get in modern society is an imperfect notion that this land "belongs to you and me." What is at stake defines the politics, but more importantly it transcends politics: land as a commodity versus land as, well, sacred.

"Sacred" is a tricky word. It sounds like moralizing. But values have consequences. Native Americans have long admired wolves and revered bison, which are safe on certain federal lands such as national parks, and not in others such as national forests. The moment either creature tiptoes out of Yellowstone National Park, for example, onto private land, it soon meets a bullet. Two worldviews compete lethally across imaginary boundaries.

If you love lands and waters, your acquaintance with the interplay of the living world soon creates a deep perception -- an apprehension -- of the world as something vast in space and deep in time, something that passes through us momentarily in the brief spark of our own lives, something that we might help steward but must never harm, something not ours -- something sacred.

I became an ecologist because I love the living world. I resent greedy, threatening bullies who would take from wildlife their refuge and from the Paiutes and the rest of us our sacred grounds and our children's trust. It matters that we are meek and fearful of people with guns occupying a holy refuge. We fear that they are excitable. We believe we must appear rational and above all, calm.

I am not calm. It matters crucially that these lands belong to everyone and thus no one. In the words "public trust" there is something much deeper than ownership. Our nation is wealthy in proportion to how much we have not yet ruined, how much we can afford to hold whole and not liquidate. Keeping the living world is a multigenerational relay race that can never decisively be won. But it can be lost. Greed springs eternal, but land can die. Our work is to hand the next generation a torch still radiant with life, rich in possibilities. That is not political. That is sacred.

America the Beautiful means something, and much of what it means is this: Our national parks, wildlife refuges, national forests and other public lands prove that we are one nation of splendors. It means we have the present that we steward, as well as a future that we hold in trust. It is not about us, not about now. These eternal values -- deep and lofty as they are, with ownership by all and yet by none -- cannot be "occupied" by people sitting in a government building or a stolen government truck. These public-trust values are better, vastly, than that. And so, I hope, are we.