As the brilliant lights of the White House shine across Pennsylvania Avenue Monday evening, generated by a coal-fired plant that uses coal stripmined from devastating mountaintop removal operations in Appalachia, religious leaders and organizations representing over 45 million Americans from across the country will hold a special candlelight prayer vigil at 7pm in Lafayette Park.

"The purpose of the rally is to remember the nearly 500 mountains already destroyed by mountaintop removal mining," according to Jordan Blevins, Assistant Director of the National Council of Church's Eco-Justice Office, and the sponsor of the event, "and to have people of faith call upon the federal government to end this destructive practice."

This little coal-fired light of mine: Will President Barack Obama be listening to these prayers to end a mining practice that detonates millions of pounds of ammonium nitrate/fuel oil explosives every day in the Appalachian coalfields in order to scoop up only 5-7 percent of our national coal production?

The National Council of Churches is the ecumenical voice of America's Orthodox, Protestant, Anglican, historic African American and traditional peace churches, and represents over 45 million Americans in 100,000 congregations across the country. For more information on today's event, visit their Eco-Justice site.

August 3rd should be a national day of atonement for our sins against the American mountains and mountaineers.

Today marks the 32nd anniversary of the signing of the Surface Mining Control and Reclamation Act in 1977, which President Jimmy Carter called "a disappointing effort" and a "watered down" bill, and unleashed one of the most egregious environmental violations in our nation's history. Carter's main concern with SMCRA's loopholes dealt with the atrocious political compromise engineered by Big Coal sycophants in Congress, which effectively granted federal recognition of mountaintop removal. Nearly four decades later, over 1.2 million acres of hardwood deciduous forests in our nation's carbon sink have been wiped, historic communities have been depopulated and left in ruin, and over 1,2o0 miles of waterways have been jammed with mining waste.

For more history on Carter, SMCRA and the last 38 years of regulatory machinations and mountaintop removal mayhem, go here and here.

Religious leaders and ecumenical organizations have been outspoken on mountaintop removal destruction for years. 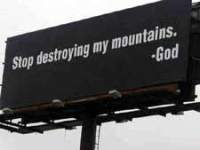 Over the past decade, six major denominations have issued anti-mountaintop removal resolutions of faith, stating that "the sanctity and sacredness of human life and the natural environment should not be destroyed in the name of corporate profit," and "mountaintop removal coal mining is devastating the environment, economies, people, and culture in Appalachia." Similar resolutions have been passed by the Evangelical Lutheran Church in America, the Episcopal Church, the United Methodist Church, the Unitarian Universalist Association, and the Religious Society of Friends.

The Presbyterian Church of the United States declared:

WHEREAS, mountaintop removal coal mining destroys both the beauty and productive capacity of the land thus eliminating future or alternative economic opportunities for the families of Appalachia WHEREAS, God instructs us to "not defile the land where you live and where I dwell" (Numbers 35:34) [...]It is resolved that the 217th General Assembly of the Presbyterian Church USA, urges state and federal agencies that regulate mining practices, as well as coal companies themselves, to abandon the practice of mountaintop removal coal mining and work to meet our nation's energy needs in a manner that is just, sustainable and consistent with Christian values.

Last spring, the West Virginia Council of Churches published a book of personal narratives about the human costs and human rights violations of mountaintop removal on coalfields residents. The booklet, Mountain Tops Do Not Grow Back, Stories of Living in the Midst of Mountain Top Removal Strip Mining, can be read here.

Two years ago, the Catholic Committee of Appalachia and the Kentuckians for the Commonwealth sponsored a tour of mountaintop removal sites for several national evangelical leaders in the United States, and announced their intent to "pledge voice and vote against mountaintop removal. Our voices will retell the testimony we have heard and the destruction we have seen through our sermons, writings, and conversations." More information on the tour can be found here.

The Church needs to stand with those who live lives of hopelessness and helplessness. The mountain culture and its way life are being destroyed. Thankfully, the Catholic Committee of Appalachia (CCA), under the direction of Sister Robbie Pentecost and the many Church workers in the area, are willing to stand up and be counted. "Mountain top removal" is just another example of profit taking preference over the lives of people, where the powerful wage a different kind of war against the powerless.

The Christians for the Mountains (CFTM) organization was founded a few years ago as a a "network of persons committed to advocating that Christians and their churches recognize their God-given responsibility to live compatibly and sustainably upon this earth God has created." CFTM has been active in organizing in events and campaigns in the coalfield region.

Here's a clip from the Christians for the Mountains role in "Mountain Mourning," in the Mountains Don't Grow Back film documentary by B. J. Gudmundsson: