It's often been said that good things come to those who wait. But no one knows that axiom better than voice actor Jodi Benson. Who had to wait a full year after handing in her The Little Mermaid audition tape before Jodi then learned that she had won the role of a lifetime.

"Back in the Fall of 1986, I was appearing in Smile, a Broadway musical that Howard Ashman had written with Marvin Hamlisch. Given that Howard and Marvin were such huge talents, everyone thought that this show would run forever. But that isn't what happened with Smile. It closed at the Lunt-Fontanne Theatre after just 48 performances in January of 1987," Benson recalled during a recent phone interview.

"Now at this point, Howard had just begun pre-production on The Little Mermaid at Disney. And he genuinely felt bad that Smile had closed so quickly. Which is why he then invited all of the girls from that show to come audition for Ariel," Jodi continued. "So I -- just like everybody else in Smile -- laid down my audition on an old-fashioned, reel-to-reel tape. And this tape was then sent into the powers-that-be at Disney with no names or pictures attached. They were just listening to voices, trying to find just the right actress to sing & to speak for this character in that movie."

"And me? After I sent in my tape, I did what other actresses do in New York. I went out on auditions. I tried out for a lot of other parts. I went on with my life. It wasn't 'til early 1988, a full year later, that I got a call that my tape had been selected. So it's quite miraculous, really," Benson said.

And the next thing Jodi knew, she was in a recording booth with Howard, as she then tried to deliver the very specific vocal performance that Ashman wanted for Ariel.

"Now normally when you record a voice for an animated feature, the performer's in the booth in front of the mic and the director is behind the glass. But because I had never done anything like this before, Howard was in the booth with me the whole time as I was recording Ariel. In fact, even now, if you listen carefully to the voice tracks & songs that I recorded for this Disney film, you can actually hear Howard breathing in the background sometimes," Benson stated. 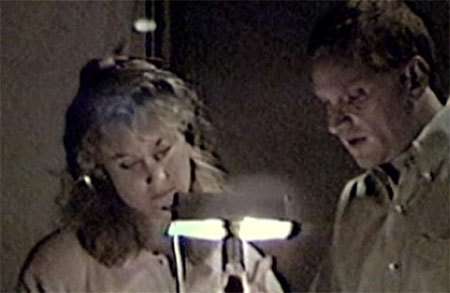 Now some performers might have been put off by Ashman's very in-your-face directing style. But not Jodi.

"You have to understand that -- by this point -- what with first the Smile workshop, then that show's out-of-town try-out in Washington D.C., followed by our short run of Broadway, I had been working with Howard for three years at this point. So I was already very aware of how intense he could get sometimes," Benson explained. "But you also have to understand that -- at this point in my career -- I had never voiced an animated character before. So to have Howard there in the recording booth right beside me, helping me shape my performance of Ariel, sometimes spoon-feeding me specific line readings, was really quite helpful. And very generous of Howard, I might add."

So Jodi recorded all of Ariel's songs & dialogue and then returned to Broadway, little knowing what was going to happen once The Little Mermaid opened in theaters nationwide in November of 1989.

"It was great to see this new Disney animated feature get such great reviews. I was proud of my work on this project. And because people seemed to genuinely love the music from Little Mermaid, I was -- of course -- happy for Howard & Alan Menken. Especially after this film took home that year's Oscars for Best Song & Best Score," Benson enthused. "But if you had told me back in late 1989 / early 1990, that -- over 20 years later -- Ariel would still be going strong, that they're be these direct-to-video sequels & theme park attractions & TV shows, or that I'd still be providing the voice for this character on all of these projects ... Well, I'd have told you that you were nuts."

Mind you, the reason that Jodi has hung on so long as Ariel's official voice is the Disney Character Voice Department. Which is all about maintaining the vocal integrity of the Company's stable of animated characters.

"At Disney, whenever possible, they always try and use the original voice of a specific animated character. So that -- when a child is playing with a talking Ariel doll or watching as the Little Mermaid makes an appearance on a TV show like 'Sofia the First' -- this character always sounds the same, maintains a certain level of vocal integrity & consistency," Benson continued.

And speaking of "Sofia the First," this hit Disney Junior series presents its first primetime special, "The Floating Palace," this Sunday at 7 p.m. ET/PT. And given that this story is set at sea, it shouldn't be all that surprising to learn that Disney's first little girl princess manages -- over the course of this hour-long undersea adventure -- to bump into the Little Mermaid. 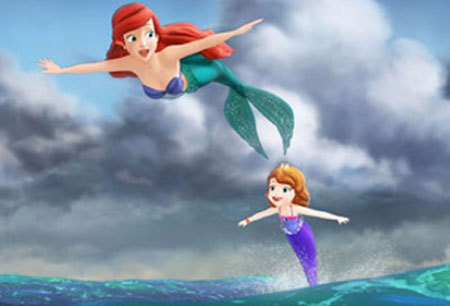 "I was very flattered when Disney Junior reached out and invited me to come voice Ariel for this special primetime edition of 'Sofia the First,' " Jodi stated. "As the parent myself, I really appreciate the positive messages that this animated series is trying to put out there. Given how Sofia is always trying to do what's right, I think that this character is a great role model for kids today."

And speaking of role models, in addition to continually being called upon to voice Ariel, Benson is also now the official voice of Barbie.

"I remember when John Lasseter called me back in the late 1990s to personally invite me to come be the voice of Barbie in 'Toy Story 2.' And at that time ... Well, I just didn't have the heart to tell John that -- 10 years earlier -- Mattel had actually already hired me to come be the official voice of Barbie on this stop-motion work-out tape that that toy company was producing at that time. So at this point, I guess that I've been voicing Barbie for almost as long as I've been voicing Ariel," Jodi laughed.

And given that Disney Character Voice department has been so loyal to Benson, making sure that -- as soon as a new Little Mermaid project gets announced -- Jodi then gets a phone call to come record Ariel's voice for that production ... Well, Ms. Benson does what she can to help return that favor.

"This is why I offered to step in and record the voice of Lady on 'Scamp's Great Adventure.' Barbara Luddy -- the actress who originally recorded the voice of Lady for Disney's first 'Lady and the Tramp' back in 1955 -- is no longer with us. And I wanted to do what I could to help the Disney Company maintain the vocal integrity of that character," Jodi said. "I did the same sort of thing on '101 Dalmatians II: Patch's London Adventure.' Voicing the role of Anita when the actress who originally played that part wasn't available."

And speaking of playing a part ... After all these years of voicing Ariel, is there some other part in the "Little Mermaid" universe that Benson has dreamed of someday playing?

"Well, people often forget that -- in addition to voicing Ariel in "The Little Mermaid" -- I also voiced Vanessa. Which is the human disguise that Ursula used to trick Prince Eric into marrying her. And given that The Walt Disney Company now has a stage version of 'The Little Mermaid,' it might be fun someday to get up onstage and then play the Sea Witch," Jodi concluded. "I mean, after all these years of voicing a Disney Princess, it might be fun to see what it's like being a Disney Villain."