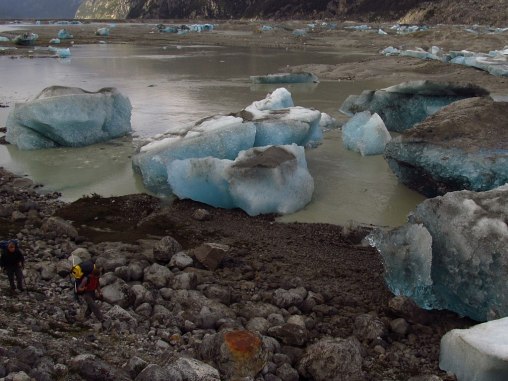 Advertisement
Two people walk next to ice blocks in the Lake Cachet II in Aysen, Chilean Patagonia on April 6, 2012. Shortly before midnight of March 31, 2012, the lake with his 200 million liters of water began empty for second time this year. The lake disappeared completely due to rising temperatures driven by climate change.

Only about 2.5 percent of all the world's water is fresh, and 99.7 percent of that fresh water is found in snow, ice, or groundwater. That means rivers and lakes make up a tiny sliver of the world's "aquasphere" -- and the sliver is getting smaller. You've probably heard stories of environmental catastrophes in Central Asia, with lakes like the Aral Sea and China's Hongjiannao Lake almost disappearing over the past forty years, due to ill-conceived irrigation projects. But sometimes, lakes can disappear even quicker than that. Sometimes it happens overnight.

See Also: Stop Visiting These Places! You're Ruining Them!

There are many glacial lakes in the mountainous Aysén region of Chile's southern Patagonia. The massive Colonia Glacier dams a lake called Cachet II, normally two square miles of water reflecting the nearby peaks of the Andes. But on March 31, 2012, the entire lake disappeared overnight. The sun rose on a dry, sandy valley spotted with puddles and large chunks of ice. Ninety feet of water had vanished in a matter of hours.

The disappearance was dramatic, but it was no mystery. The lake had vanished just two months before, on January 27, and 10 times in the past five years. It happens every time that rising temperatures weaken the glacier enough for water to tunnel all the way through the ice wall. Two hundred million cubic liters of water gushed out into Chile's largest river, the Baker, creating giant waves 60 miles downstream, as far as the river's mouth at the Pacific Ocean.

Now that Lake Cachet II has started vanishing several times a year, the local villagers have the art of evacuation down to a science. This time, an alarm system monitoring the lake gave them eight hours to flee to higher ground with their animal herds. But other glacial lake floods in the region have unleashed mud tsunamis that have buried entire villages, leaving everyone homeless.

The United Nations reports that the glaciers of Patagonia are "losing mass faster and for longer than glaciers in other parts of the world." This means a huge loss in the amount of fresh water that reaches the coast of the continent, where most people live. Climate change models predict that the glacial lakes of the Andes are in for many more disappearances in the years to come. If you ever go for a dip in Lake Cachet II, be careful. You might just end up paddling around on dry ground like Daffy Duck in a desert mirage.